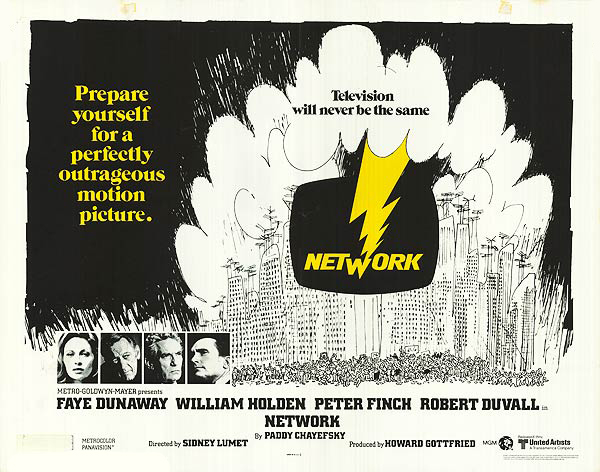 This was one of those old "Oscar" films that I always heard about, but never actually saw. I knew it was huge when it came out in 1976, the same year I was born, and won a shitload of Oscars. But other than that I didn't really know anything about it. This recently became available on Netflix Instant and when I read the little synopsis, I have to admit it sounded a helluva lot more interesting than I had anticipated. So I just had to see it. I enjoy these older films from time to time. They always remind me of how these dramas and thrillers should be made, with class. Plus, it was one of those rainy day afternoons. So it was a perfect opportunity to take in an old Hollywood classic.

So there's this television news anchor named Howard Beale (Peter Finch), who's at the brink of a nervous breakdown. His marriage is on the rocks, he's unhappy in life and he's just found out that he's being fired because of low ratings, right before he's about to go on air. So he decides that he just doesn't give a shit anymore and when he sits at his desk one last time to deliver the news, he instead offers a rambling speech about how miserable he is and that come tomorrow, he will blow his brains out on live television for the world to see. This is the event that sets everything in motion. The studio realizes that he's unbalanced and possibly suffering from a nervous emotional breakdown. But after he convinces them that he's in fact fine, they let him deliver one last monologue on live television before he's taken off the air for good. It's with this monologue that he delivers a tirade on the world, belting out opinions on every topic and before long, he's a sensation. Finally, somebody who speaks the truth! Naturally, the network wants to capitalize on this new fame since they are now the #1 station after being the lowest rated network for years. But how far is too far?

That's only a fraction of what's going on here though, because there are various other stories and lots of behind the scenes things going on, which come off as intense as any drama you will ever see. The razor sharp dialogue is one for the books. People don't really talk like this in real life, but seeing these seasoned actors belt out these amazing speeches and lines of dialogue that sound like it came right out of a play is truly amazing. This film, from every angle, is amazing.

The cast here is simply phenomenal, and though they're all just fantastic, it's Faye Dunaway who steals the show playing a new hands on producer of the fledgling network and who becomes the brain child behind the whole idea of marketing and ultimately benefiting off of newscaster Howard Beale's nervous breakdown. She's just a rare breed of actress who's so impossibly good at what she does. That's not to say the rest aren't fantastic. Robert Duvall, Peter Finch (who won an posthumous Oscar for his role as Howard Beale), Ned Beatty and William Holden all bring the right amount of class to the production.

If you're a lover of cinema, this is one you need to see. I can't believe it's taken me this long, but I'm glad I finally saw it. It's simply an amazing film.

Posted by robotGEEK at 9:45 PM