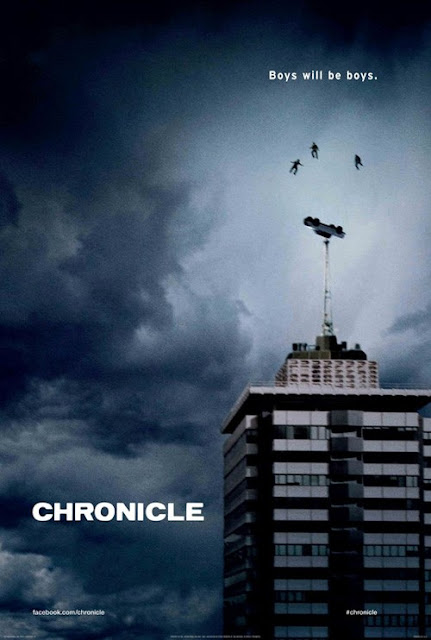 This was a film I tried so hard to go see in the theater because it intrigued me so much that I felt like I owed it to the geek community to do so. I did not make it to the theater after all as usual, but I knew it would be coming out on DVD shortly after and so I just patiently waited. But I had already built up this whole awesome premise in my head about how far it would or wouldn't go with this concept and the infinite possibilities of being a teenager with superpowers suddenly bestowed upon you. I mean, what would you do? Would you use it for good? Would you use it for evil? Or would you be a prick and use it for selfish purposes? Either way, it's such a fascinating idea.

Well I can honestly and happily say that this film did not disappoint. In fact, I would say it surpassed my assumptions and expectations because it ended up going further with that central concept than I expected and it was a surprisingly much darker film.

Matt and Andrew are cousins in high school. Andrew is a loner while Matt is a little more outgoing. Andrew decides to buy a camera one day and record every second of every day for documentation. It's annoying most of the time, but offers a fascinating glimpse into his daily life as a loner with a mother on her death bed, an alcoholic and abusive father and the constant bullying he receives at school. This is how we see the goings on as a viewer in Chronicle, through the lens of Andrew's video camera. One night while attending a party, they befriend Steve, a popular kid in school with high aspirations. They go down an embankment when they find something odd in the ground and decide to film it. What happens to them as a result of this exploration defies explanation, yet somehow gives them superhuman abilities. At first it's fun as they start learning new abilities and powers while using them to taunt and tease people for fun and laughs. Soon however, Andrew's deep emotional problems and traumatic family life are mirrored and strengthened by these new powers and before long he becomes an angry and uncontrollable force with powers too great to comprehend in his fragile state. Will Matt and Steve be able to stop Andrew before it's too late?

If you read my reviews, you know I generally despise found footage films. They drive me nuts and physically make me ill with there shaky cam bullshit. Often times I find it an easy copout for no talent filmmakers. It's just so easy to make a found footage film these days than to put any real effort into making an actual film. But I digress. The found footage theme actually works in Chronicle's favor and for the most part, it's not overdone. One of the most surprising aspects of the way Chronicle was shot is that it wasn't unnecessarily and annoyingly shaky. Director Josh Trank creatively found ways to keep the camera still for the majority of the film and mostly succeeds. How else can I put this? I didn't want to throw up.

I almost considered watching this with my 9 year old knowing what it was about partially and thought he might enjoy it too. I'm glad I didn't because this one threw me for a loop going into some really dark places that I hadn't anticipated. The last quarter of this is just intense, dramatic and jaw dropping to a degree. Though the effects weren't up to par a few times, for the most part they work really well considering the budget, which I'm sure is part of the reason director Josh Trank has been tapped to reboot the Fantastic Four franchise. He's got a genuine talent for filmmaking and special effects, no doubt about it, and I'm curious to see what he does with that Marvel property. In any case, it certainly couldn't be any worse than the two lackluster films we've already gotten. Just sayin'.

Though all the actors do a fine job conveying different types of the High School "type", I think the standout here is Dane DeHaan, who plays the troubled introverted kid of the group Andrew. At first playing him to be a quiet loner who's constantly bullied and picked on at school and who's just flat out socially awkward, the acquirement of these super human abilities only seem to enhance his deep psychological and emotional problems to such an intense degree that...................well I won't spoil it for you. You just have to see it. It's pretty damn good.

One last little thing before I go. I didn't realize until my buddy Ingo over at Hellford667 Movie Reviews mentioned it, but the screenplay is credited to a Max Landis, son of cult director John Landis. Coooooool. Not bad Mr. Landis. Not bad indeed.

I must say, the trailers barely hint at what this film has to offer. Maybe that was on purpose, or maybe it was bad marketing; I don't know. All I can say from my own experience with it is that it went a lot further and a lot darker than I was expecting it to, which was very refreshing.
Posted by robotGEEK at 12:28 PM