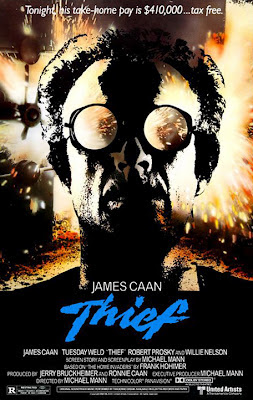 The first time I ever heard of Michael Mann was with The Last of the Mohicans. I never actually saw that one, but remember reading a lot about it when it was released and his name was always associated with every article I had read because apparently it was such a different type of film for him than what he was usually doing. Once I began reading up on him soon after that I realized he was responsible for the Miami Vice series from the 80's. Okay, pretty cool. He's got some street cred. 3 years later he releases his next film, the crime opus Heat, and apparently did something that no other filmmaker had been able to do, put both Robert De Niro "and" Al Pacino together on the silver screen in the same "scene". Sure they were both in Godfather II, but they didn't actually share any screen time. I know, doesn't seem like a big deal today (especially after 2008's Righteous Kill), but I remember it being a helluva big deal when Heat came out in 1995. After that he sort of teeter totters between drama, biopics and action thrillers. All of which sees him gradually shift his style of filmmaking to something more mainstream and freestyle. Nothing like the calculated and meticulous style of filmmaking he used to use with his earlier films, films like Thief. I'll be honest, I'd pretty much given up on Mann after films like Ali and The Insider. Collateral was cool, but I just don't like the way he shot it. And I still haven't Miami Vice or Public Enemies. But one day I caught The Keep on Netflix, for no other reason than the name intrigued me and I was looking for something 80's to quench my thirst. When I saw it was written and directed by Michael Mann, I was shocked, even more so once the film started playing out. It was beautiful, stunningly shot in glorious widescreen and actually a pretty decent horror film. Not great, and a little weird, but certainly entertaining. You see, that's the Michael Mann I miss. It was with that film that I slowly started to seek out his earlier films. Thief was next on my list after Hellford667 Movie Reviews enthusiastic review sold me. You can check out that awesome review here.

The plot gets pretty intricate with lots of little subplots and whatnot, but basically Frank (James Caan) is a jewel thief. He breaks into high end vaults and safes and steals diamonds with his good buddy Barry, and a third guy who acts as a lookout. No money, no gold, just jewels. He runs a car dealership and a local tavern by day to seem legit, but spends his nights stealing diamonds and reselling them on the black market for gangsters. As the way most of these stories go, he dreams of quitting the life and retiring with a family. You'd never guess that once you got to know him, but please just go with it. Being solely independent, he reluctantly accepts a big score from a big time gangster against his better judgement in hopes that the pay out will allow him to leave the life sooner rather than later and retire for good. Only things don't work out that way and when you push Frank, even if it's just a little, you better prepare yourself for a storm. A fact these big time hoodlums are completely unaware of.

This is a really good fuckin' movie. Released in 1981, though it feels more like the 70's, Thief is a prime example of pure, raw, genuine talent on a technical level. This was Mann's first theatrical feature, and with the level of maturity he shows with the material, you'd think Thief was his fifth or sixth film. It's impressive. Add James Cann's ferocious turn as Frank and you've got a solid winner. My only real beef would be that I felt it delved into Frank's love life way too much and could easily have been trimmed by about 30 minutes. Thief runs a tad over 2 hours, and it  seemed like the film stopped dead in it's tracks every time it addressed his love life, which honestly didn't really add anything to the story other than the fact that it showed he's a prick who has no problem rough housing a lady, even in a crowded bar no less. But if they had cut most of that stuff out, it would have played a lot more smoothly, necessarily shortening the running time and having a much better flow.

Do you dig that poster art? I don't. To me it looks trippy, or psychedelic and says nothing about the film in general. If you haven't seen the film, then you don't even know what those images mean. Plus, it doesn't look like James Caan at all. Why is it in black and white and in negative? Bad poster art for a great film, not a good combination. The lame DVD cover art didn't do it any favors either. Get on the ball people!

This has a nice supporting cast of character actors portraying Italian hoodlums. Hell, even Dennis Farina is in here as a henchman, though he never utters a single word. But I think the most surprising casting choice for me was Willie Nelson as Frank's mentor and father figure Okla, who sits behind bars with a disease that will kill him before he ever gets released. This was another minor subplot that I felt could easily have been trimmed up a bit. I get the whole mentor angle, but I didn't feel they needed to keep going back to it as much as they did.

Minor issues aside, I love how detailed Mann gets when it comes to "the job". It's fascinating. He literally shows you how to break into a safe and what tools you'll need to accomplish this. And the way he shoots it is just gorgeous. Beautiful shots and impressive camera angles. And it only gets better when the shit hits the fan. Mann injects energy when the film needs it the most, the violence. And when it comes to violence, he doesn't shy away or play it down. It's bloody and it's brutal, just the way we like it. Thank you Mr. Mann.
Posted by robotGEEK at 3:02 PM