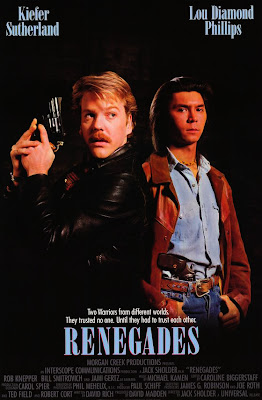 Continuing my late 80's early 90's action kick, next up is Renegades from 1989. Directed by Jack Sholder, who's work on A Nightmare on Elm Street 2 and The Hidden I happen to like very much, Renegades seems to see Sholder faulter slightly from his more stylized approach as in those two previous films, and appears to be the end of his theatrical run as he went right into DTV and television work after this. It's a shame too, because I dig his no fuss straightforward style of filmmaking, especially when action is concerned. I think he just wasn't offered very good scripts, Renegades being one of them.

You know, this one just didn't do it for me. It was okay, but lacked any real or solid entertainment value for me. The action scenes were good, whenever there was one, which was infrequently. And I think that would probably be my biggest complaint, just not nearly enough action. I mean, especially for a movie titled Renegades, you'd think it'd be a tougher film overall. It's not. It's actually pretty tame for the most part, so for me, the title Renegades just feels all wrong for me and I know I can't be the only one who feels the same way. What makes this issue even harder is the fact that Sutherland and Phillips play off each other great. They and director Jack Sholder just seem to suffer from a weak script. It seriously could have been a lot better, a lot more exciting and a lot more violent, but it just all feels so tame. The trailer is so misleading, so don't judge this film by that. They even play "The Boys are Back in Town" (yup, from 48 Hours) in that trailer and it makes it seem like some cop buddy action packed flick and it's not because they took every single best shot from the movie and put it in that trailer.

Kiefer Sutherland was fun to watch as the grumpy undercover cop with an attitude. And Lou Diamond Phillips again delivers after liking him in both The First Power and Extreme Justice, here as a Native American Indian in the wrong place at the wrong time who makes it his duty to reclaim a sacred spear stolen from a museum after his brother is killed trying to protect it from a mob boss during an escape. In certain sequences, Renegades definitely has, or had, the potential to be a pretty badass cop film in the vein of 48 Hours, or any of these late '80's to early '90s cop action flicks. I mean, you've got the main ingredients in two mismatched people, one a cop, the other not, forced to work together to bring down the main villain. But it just doesn't come together so smoothly. The biggest problem with Renegades though is that it just has too many lull moments which slow down the film severely, almost to a crawl in some instances. But when there's a chase, whether it be a foot or car chase, or when something bad is about to happen, like when Sutherland's character is sitting in a bar in the beginning of the movie and see's a cop car pull over a car full of thugs as he looks out the window. You just know something bad is about to happen (he even predicts it to the nice hooker sitting next to him), and it does. Or the diamond heist sequence that Sutherland's undercover cop is a part of that goes horribly wrong. Those are the best sequences of the movie and it's that kind of tension I wish this film had more of, but sadly they are few and far between and for the most part, I found myself looking at the clock wondering how much longer I had to go till it was over.

Not a great film, but not a horrible one either. You could certainly find yourself a better way to spend 106 minutes of your life, but if you're feeling a bit nostalgic, like I was, then it's not too bad. Nowhere near the awesomeness or creativity of films in this genre and during this time like The First Power, Blue Steel, Black Rain or Ricochet, but a noble effort indeed.
Posted by robotGEEK at 8:19 PM