Review: Revenge of the Ninja 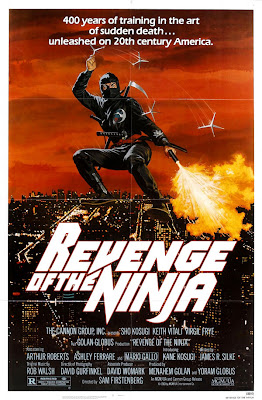 400 years of training in the art of sudden death...
unleashed on 20th century America.

If only the movie was as promising as that tagline. Man I miss taglines! I mean, I guess it's true to an extent, but not in the way you would think or at least hope for in a ninja flick.

I often forget, but way back in the early to mid 80's there was a huge ninja explosion. Ninja films were the shit back then, eventually leading to it's own genre. The only problem was that most of them weren't very good. Entertaining sure, but quantity does not equal quality.
My main beef with these ninja films that were coming out left and right during this period is that, and i'm not trying to be racist here, all these ninja films are American made. I don't know, it's kinda funny when you think about it. What does an American know about the ninja way of life? Or better yet, choreographing and executing an authentic ninja battle.  I mean, look at all the ninja films coming out within a few years of each other. Enter the Ninja, Pray for Death, Rage of Honor, American Ninja, Ninja III: The Domination, Gymkata! All directed by Americans, and not very good. I'm just sayin'.

So let me just say before I get any further that I loved this fluff piece of  bad 80's Ninja Trash Cinema. Oh it's bad people. Bad direction, action, fights, choreography (scratch that; it's not so much the choreography as much as it was the execution), acting, writing, you name it.
But hell and high water, this ninja entry absolutely positively and most definitely falls into the "it's so bad that it's actually good" category. No doubt people!

Revenge of the Ninja

came out right smack in the middle of the ninja craze in 1983. Sho Kosugi has the starring role here after playing a secondary and completely different character from the first film of this series Enter the Ninja. Here he plays Cho, a ninja who is forced to flee Japan with his mother and 5 year old son after his family is slaughtered by ninjas. I'm not sure if they ever really gave a reason why his family was targeted for assassination. He's convinced by his good friend Braden, who just so happened to be in Japan when all this assassination stuff went down, to move to America and help him open a business as well as teach in his dojo. So Cho gets comfortable in America teaching martial arts, getting hit on by his female student, and opening up his doll shop. We soon learn that this Braden guy is not a hip cat. He's actually a drug dealer and uses Cho's shipments of dolls for his shop as a front to ship his herion so that he can in turn sell it to the Italian mob.  After Braden gets double-crossed by the Italian mob boss, who insanely looks like the love child of Joe Pesci and Bill Murray, he goes on a killing spree killing all of them one by one. In the meantime, things get way more complicated for Braden and he ultimately must face Cho in a final duel. Now this is not so good for Cho as he has forsaken the ninja way when he left Japan, vowing never to wield his ninja sword ever again. And to make sure that this never happens, he fastens a piece of tape to keep the sword shut so that it never becomes unsheathed. Yup, a good ol' piece of white tape will do that every time for a ninja.

Now I did see most of these ninja films back when they came out, but being as that was over 25 years ago and that fact that i was a mere lad of about 8 or 9, I don't really remember much about them, just that there were a lot of them. So as I'm currently revisiting a lot of old 80's flicks be it Trash, Exploitation, Horror or whatever, I thought i'd mix it up a bit and do a ninja flick this time. And it was hard to choose which one to start off with first cuz as I said, there were a lot of them. But i'm glad this one was my first choice because as my expectations were extremely high, it certainly did not disappoint. Only it was entertaining in a completely different way and on a completely different level from what I was expecting. Pure 80's cheese through and through. Obviously the first person to blame here is the director, Sam Firstenberg, who undoubtedly proves he is completely incapable of handling a serious ninja flick. I mean, this is the guy who gave us the equally cheesy but still awesome Breakin' 2: Electric Boogaloo.

From a technical level, the movie's just bad all over the place. And while I do enjoy a good B-Movie quality gem anytime I can get one, when I actually end up laughing out loud during a fight sequence, then it's pretty bad, even for me. But remember, here "bad" means "good".
This film does have a few things going for it.
The first being Sho Kosugi. The guy is just a badass and surprisingly not that bad of an actor. You can tell he dubbed his own voice here, but it's still him and half of it goes into how you deliver the lines and not remembering whether he actually spoke English or not in these films and thinking that all his American films might have actually been dubbed by someone else, I was pleasantly surprised at how solid he was as an actor. Much better than Jackie Chan was during this time period anyway when he was trying to hit the American market as well with The Big Brawl and The Protector. In any case, his martial arts skill are undeniable. He's a talented mofo working a ninja sword and doing some badass flips, kicks, screams and even forcing himself to cry.
The second is Ashley Ferrare. I wouldn't call her an actress really as she's only ever been in 2 movies and 1 episode of  The Master and then apparently dropped off the face of the earth. She was a model by trade, and here she's not going to win any awards for her acting, but it doesn't matter cuz she's super hot and spends most of the movie in something completely skimpy, see through or just plain nude. So she's basically the bimbo of the movie as she's with and working for Braden, but also tries to seduce Cho. But Cho won't have any of that. He's a ninja and there's a code. I think? Or maybe he just doesn't like white girls. I don't know.
The third is the choreography. The choreography is badass and Sho Kosugi is just plain awesome. The guy is fast, precise and pretty damn impressive. It just sucks that it was executed so horribly. The filming and editing of it all is such a mess and laughable at times. It all just looks so fake. You see him throw a punch and execute maybe 10 moves, but there's no real force behind any of them. You see him touch an opponent, but they all look like taps really, with a lot of overreacting. Oh, and he does a lot of screaming when he fights.

This film is hilarious for so many reasons. The bad guy, Braden, changes into his ninja costume whenever he's going out to kill someone. But he does it in broad daylight! He doesn't ever take advantage of the whole "ninja in the shadows" mystique at all! And when he kills someone, he "always" uses some kind of weapon that kills them in like 2 seconds flat, never utilizing any kind of martial arts or ninja skills whatsoever. So you don't ever actually see him be the badass ninja they say he is, you just have to take his word for it. My thing is why even bother spending all that time putting on that getup when you could easily just shoot them or something? I would think that it would just be a lot easier and less time consuming that way.
Another hilarious sequence is when Cho and Braden are fighting in there ninja garb during the climax they amazingly seem to have an endless supply of weapons. I'm talking swords, knives, stars, rope, bow and arrows, bombs, smoke bombs and even a flame thrower for christ sake! I'm not shitting you! Braden busts out a flame thrower outta nowhere! I'm not even going to get into the logistics of running around with a flame thrower and all of these other weapons while your doing flips, jumping off of buildings, hiding under water, sword fighting and all that. It's just plain dangerous and irresponsible.

It's hard to know the thought process sometimes when a production team is making a film. Who ultimately makes the final decisions when trying to decide what the bad guys will look like? Is it the director, producer, writer or the star? I only ask because there were a few scenes here that left me dumbfounded. Like when the Italian mob boss sends a bunch of his guys to retrieve the drugs from the doll shop. For some reason the guy leading this team is a big Indian, complete with mocossins and pig tails. I don't know why and there's no explanation. Or when Cho fights a bunch of dudes in a park who look like The Village People. I'm not lying folks. They honest to god look like The Village People.

So there are a lot of fights in here, all basically designed to show Kosugi's impressive acrobatic abilities with lots of flips, kicks and jumps. There's even a cool sequence where he chases a van and jumps on it's roof as it's speeding away. He does this badass move where he somehow does a flip while it's in motion and smashes feet first into the windshield kicking both the the driver and passenger while he lands in the back, where he proceeds to kick the asses of all the other guys. Just plain awesome.
I was also surprised at how violent this thing was. You see hints of it in the beginning, but not really a lot of it until the end when the bad ninja (Braden) goes on a killing spree in this big building with the good ninja (Cho) in pursuit. There's lots of blood and dismemberment in this final act which seemed to go on for at least 30 minutes or so, making it all the more entertaining. Just don't go into this thing expecting a serious dark and gritty ninja revenge flick. It was obviously there intention, but it's not how it ultimately plays out. It's badly made and cheesy as hell, but it's so much damn fun!

If you click on the link here: Revenge of the Ninja

you can pick up this sucker super cheap over at Amazon for like $2.50 on DVD. And if your a fan of Trash Cinema, then this is a must have for your collection.

Posted by robotGEEK at 4:02 PM