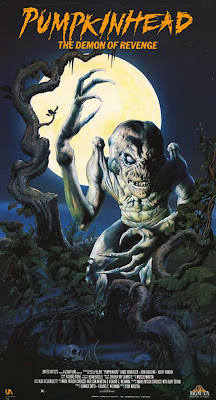 In the world of sci-fi and horror, Stan Winston is a name we all know well. He's responsible for the design, creation and effects for some of the most important films in the last 30 years. Aliens, The Terminator, Predator, Edward Scissorhands and Jurassic Park are just some of his most famous creations, to name a few. But the list is vast and let's just say, the guy was a genius. In the middle of all this awesome makeup and effects work he took the time to direct a film here and there. Pumpkinhead being his first, and then 2 years later he made a film which I had never heard of before with Anthony Michael Hall called A Gnome Named Gnorm. But for the artists sake and to preserve the good name of Stan Winston, let's just say this film doesn't exist. It's with Pumpkinhead though that we're shown that the guy has the chops to pull off big budget monster flicks. And that's really all Pumpkinhead is, a monster flick. It's not really scary and though it would most certainly be categorized under horror, it's really just a showcase for the monster itself and all the work that went into creating it with the animatronics and practical effects work by his incredible team.

I hadn't seen this one since it probably first came out and my memories of it were strong with surreal images of the creature roaming the country side looking for it's victims with lightning and strobe light action whenever he showed up. Oh, and that Lance Henriksen was awesome as usual. Funny what time does to your memory. As I watched this again recently I was surprised that while the film is cool to look at and the creature effects are impressive, it's all quite boring. It's most troubling aspect is that the film moves at a snails pace sometimes and you just can't connect with any of the characters other than Henriksen's Ed Harley because of it's lackluster script. It's Henriksen who really raises this thing beyond B level quality with his portrayal of the backwoods convenience store owner who conjures up the revenge demon in a moment of rage, only to be torn morally with the decision he's made. And in all fairness, that's really what this film is, a B-level monster film. But Stan Winston gives us some impressive visuals and makes good use of the backwoods scenery and amazing practical effects.

Ed Harley is a backwoods convenience store owner who lives with his infant son out in the middle of nowhere. One day a group of city kids show up on there way to there rented cabin for a weekend of partying. While they're at the convenience store restocking on essentials one of the city kids decides to start his partying early by riding his dirt bike recklessly in the field near by, accidentally kitting and killing the shop owners son. In a panic the kids flee since the kid responsible has been drinking and already has a rap sheet. In a fit of rage Ed Harley conjurs up the Pumpkinhead, the spirit of vengeance to exact revenge on those responsible for his sons death. Only he gets more than he bargained for when he realizes that every time Pumpkinhead kills, Ed Harley see's and feels every death. Ultimately he's left with the choice of trying to save the kids and stop the creature himself.

There are a lot of kills, but not a lot of gore. And for a horror movie, that's just not a good thing. And while the creature itself is big and intimidating, you really don't feel any sense of dread whenever it shows up because the thing is so damn big and clumsy, you're almost positive you can outrun it. Logically, it just doesn't scare very well. The reason why it's actually able to ever get any of these guys is because it just seems to miraculously appear outta nowhere at just the right time. Had it had to actually walk or whatever to it's intended destinations, I can assure you it wouldn't be as intimidating. Probably more out of breath and exhausted than anything else. But then again, maybe it's breath can be deadly too?
One of the more interesting aspects of the film is that everybody in this backwoods town knows of the Pumpkinhead legend. So much so that the kids even have a nursery rhyme about it. So when Pumpkinhead is out on the prowl, everyone locks there doors and shuts there windows until the creature has found it's intended victim. So it's more like "Oh shit, Pumpkinheads out again. Lock the doors and wait it out as usual until it's over."
The actors do a decent job here. None of them look familiar or stand out other than Jeff East who plays one of the city kids Chris. He was the young Clark Kent in the original Richard Donner directed Superman from 1978. The main problem with all of the characters from the city kids to the rednecks is that they're all so cliche'd. They're either one or the other in terms of city or backwoods and you don't care about any of them. But again, it's Lance's movie and he does the job better than anyone in here and get's it done right, right down to the fake teeth and dirty clothes.

It was fun to watch in retrospect, but mainly for the long forgotten days of practical creature effects work. It didn't seem to hold up nearly as well as I remember it being, but Lance Henriksen delivers one of his best performances and that along with Stan Winston's creative use of atmosphere and amazing creature effects work make this a tolerable horror experience. Much better than all the direct-to-video sequels anyway.
Posted by robotGEEK at 4:55 PM