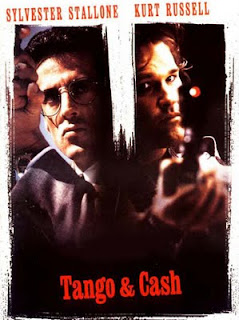 Immediately after the title comes up, and before a single frame is shown, you hear Stallone utter the words "let's do it" to a blank screen. That pretty much set's up the tone for the film as you know that you're in for a really fun ride.

Tango & Cash is excess of the highest caliber in the world of 80's action cinema. This thing is so over the top and just plain ridiculous, but in such a fun way that you just can't help but love this thing.
You can immediately tell that they were going for a Lethal Weapon vibe here with the mismatched duo continually at odds with each other, but it works remarkably well here with Russell being a natural at this kinda role easily channeling Jack Burton while Stallone, though likable here, tries maybe a little too hard to be funny. But that's not the entire time and the movie does flip flop from funny to serious throughout, and when the action kicks in there's plenty of it and it's so over the top that it's such a blast to watch. There's easily at least a dozen instances where these guys should have died instantly but they keep trudging on with barely a scratch. That's my kinda action flick.

1989 is a very special year for me. I had also done a review about a week ago for another film from 1989, Ridley Scott's Black Rain. You can check out my review here. But 1989, to me, was the first year of the summer blockbusters. As mentioned in my Black Rain review, it was the summer that Batman, Indiana Jones and the Last Crusade and Ghostbusters II. I don't recall ever having a summer with this many films that made so much money. Before Batman, I don't remember any other summer film come out that had so much marketing, toy tie ins and anticipation since Return of the Jedi. But a few other gems were able to sneak out of that crazy year like Black Rain and Tango & Cash.

Tango & Cash kinda has a lot of everything in here. It's got a crazy amount of top notch action sequences, and it's also pretty funny. But right in the middle when they get framed for murder and get sent to prison, it sorta takes a darker more suspenseful tone. The score, especially the theme song, is pretty catchy; if not completely dated. It sounded a little too playful and cheesy for my taste and reminded me a lot of Beverly Hills Cop, but it didn't necessarily hurt the film. That kind of score would not work in an action film today, which certainly gives it that dated 80's feel whether you like it or not.

Tango (Stallone) is an LA cop who dresses like a banker, makes a shitload of money in the stock market and only works as a cop because he loves the job. Cash (Russell)  is a standout cop on the other side of town who's just as famous as Tango is, only he's more of a "get his hands dirty" kinda cop who clearly works because he has to and lives paycheck to paycheck. As they are both working on a drug dealing case, they get framed for a murder they didn't commit and sent to prison where they ultimately must escape and clear there names.

That's all you really need to know. It's short, sweet and to the point......just like the film. There's no hidden messages or anything here. Just big budget Hollywood action of the highest degree with so many plot holes and inconsistencies that you often scratch your head in amazement.

For example:
- The first sequence when Cash is shown he goes into his apartment only to be shot at by an intruder. Obviously it's a hit and not a robbery but after the bad guy gets one shot in, Cash shoots back with one of his badass gun boots and then the guy takes off running like a Pansy. Weird when you consider that if the bad guy knew Cash was a cop wouldn't he expect him to fire back and retaliate?

- In the beginning of the film, Tango shoots the windshield of the semi and the bad guys slam on the brakes before it comes to a dead halt right in front of him. But how does it not keep rolling after the driver takes his foot off the brakes when they go crashing through the windsheild? Wouldn't it just keep rolling right over them once they take there foot off the pedal?

- Why, if the entire city's police force is after them since they escaped from prison and have had there pictures spread all over every newspaper, are they able to walk around in broad daylight?

- Tango and his sister Katherine are in a heated argument about who actually owns the house when Tango points out it's his house and let's her dwell there. She says she pays rent to which he replies "yea, and your 2 weeks late." Katherine then yells "Well if you would check your mail!" That makes no sense when you consider the fact that they both live in the same house. Why wouldn't she just leave the check on the counter like any other roommate?

- If the entire police force and now the FEDS are after Tango and Cash, why not stake out Tango's house? Wouldn't that be one of the first places he'd go?

- They keep calling one of the bad guys English, but he keeps saying stuff like "mate" and speaks with an Australian accent.

- And one of the biggest ones, when Tango and Cash escape from the prison they are on top of one of the prison buildings where they have to jump from the roof over the edge and grab an electric wire, sling there belt over it and use it to slide down the wire over the prison wall in the pouring rain. First of all, they woulda surely died. It's dark and raining and you can't see, so they would have missed that wire completely. And if they had seen it, they surely wouldn't have been able to actually grab it in the rain. But that's besides the point. During this sequence you see Tango in a wife-beater shirt and Cash in a sleeveless muscle shirt. But when the stunt doubles are doing the dangerous stuff Cash's double clearly has a regular shirt on with sleeves. And it goes back and forth from muscle shirt to t-shirt during this whole sequence and I remember even as a kid watching this in the theater how horribly obvious it was. That always drove me nuts. But anyway, enough of the nitpicking.

I remember reading that during production of this film director Andrey Konchalovskiy was fired and Purple Rain director Albert Magnoli was brought in to finish the film. At the time, remember this was before the internet so all the news I got was from movie magazines, it was said that Konchalovskiy was making the film too dramatic and let him go from the project. So there are two directors credited here, but when you watch it, you can't tell who did what scenes as there's no difference in style to differentiate the two. My guess is that Magnoli was brought in after principal photography was complete because it all looks like Konchalovskiy's work here and it looks great. The film has style written all over it, even when the cheesy music and the comedy bits come into  play, and I wish he had done more action in his career.

One of the standout things from this film is the awesome cast of B-Movie regular baddies that are in here. Brion James, James Hong, Jack Palance and the one and only Robert "Maniac Cop" Z'Dar all give this film that extra bit of badassness that would sorely have been missing. And a young Terri Hatcher, when she was cute, is not half bad as Tango's sister Katherine. Oh! And if you missed it, Ozone (Adolfo Quinones) from Breakin' and Breakin' 2: Electric Boogaloo shows up here in the scene where Cash goes to meet Tango's sister at the nightclub. He's the dude in the leather getup without any lines. If you don't pay attention, you'll miss it. I had always thought that was him, but it's nice to have IMDB to confirm it.

One thing that always bugged me about this is that in the trailers, there are at least 3 scenes that are not in the film and I always hoped that they would release an uncut version some day, or at least a director's cut.
I should also mention that this has probably the most badass truck I've ever seen on film. I don't know what you call it, but holy shit this thing rules. It's just a complete monster with a Gatling gun mounted on the side and a machine gun spraying bullets from it's hood.

I love this late 80's action treat. Whenever i'm in a rut or have just seen something truly awful it's films like this that always reignites my passion for awesome action cinema. It was just the vehicle Stallone needed at the time after back to back clunkers like Rambo III and Over the Top. Only problem was that he went on to make Oscar and Stop! Or My Mom Will Shoot after this. So you never know I guess.
Posted by robotGEEK at 5:03 PM