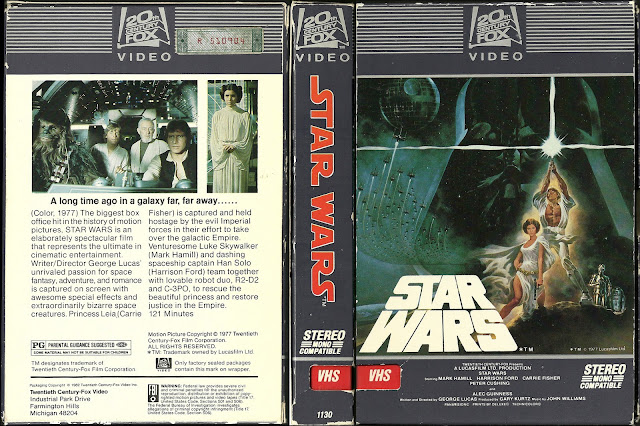 This is an original 20th Century Fox Video VHS release of the original unaltered Star Wars. From what I gather, this was released in September 1982 in an oversized cardboard "drawer" case. So I think this would make it the third VHS release of this film from this year. The first two were "Video Rental Library" versions specifically intended for Libraries, one in a black clamshell case (the "Holy Grail" of Star Wars VHS tapes), and the second is in this same exact format here, except it has the words "Video Rental Library" displayed on the front, spine and back with some subtle differences on the back. This one here would be the third official VHS release and the first release available for purchase and along with the other two previous versions released this same year, is one of the rarest and most sought after by collectors. I've had my eye out for one of these for a long time and have bid and lost on many eBay auctions this past year. Usually they go for anywhere from around $50 to over a hundred, depending on the condition and if there are any bidders out there looking for this at that particular time.
Funny thing though is that about a week ago I was casually browsing eBay for some VHS tapes in the sci-fi section (not even looking for this in particular) and this was at the top of the list with only 2 days left and a starting bid of only $10, with no bids at that point. I thought "what the hell?". I've certainly bid on and lost on plenty of these in the past to know that I would more than likely walk away the loser on this one again, but it never hurts to try. To my astonishment, no other bids were placed and when the auction was over, I had won it with my $10 starting bid and I couldn't be happier. The condition of this VHS is pretty decent (the main issues being edge wear), but for the most part looks great. I guess it just goes to show you that sometimes it just pays to be patient.
Posted by robotGEEK at 7:53 PM