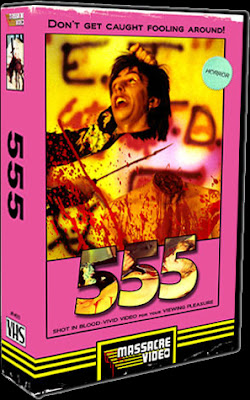 For me, one of the best things about doing this movie blog is the badass people I've met along the way. My man Ingo over at Hellford667, my man Ty over at Comeuppance Reviews and Jayson at Ghoul Basement who just so happened to be the one who pointed me to this awesome bit of news. Thanks Jayson!


For the first time on OFFICIAL DVD is Wally Koz's 1988 shot-on-video splatter masterpiece "555"!
A hippie killer with a sex-fueled, murderous bloodlust is on a rampage and he’s brutally murdering innocent young couples! A nationwide trend of killings with the same m.o. happens to catch the eyes of Detective Haller and Sergeant Connor. Every five years, within five days of each other, the killer strikes! Now it’s up to Haller and Connor to find out who is behind these grisly murders. Who is this crazed, blood thirsty hippie? And more importantly, what is the significance of the third ‘five’? Prepare yourself for this blood-soaked, psycho thriller that will make you watch your back the next time you fool around!
So the folks over at Massacre Video have chosen the legendary cult film 555 as there first official release. What makes the release more badass is the fact that they've chosen to release this film in 3 different formats. VHS, DVD and a Limited Edition DVD set.
The VHS edition was limited to only 50 copies and has unfortunately been sold out. The standard DVD edition is still available at a very reasonable price of only $20 and features a nice selection of special features. The Limited Edition DVD is also still temporarily available and comes with a custom VHS cover box as well as an array of goodies like pins, cloth patch, stickers, replica video poster, art and autographed postcards and extremely limited to only 100 copies at a price of $65.
Please note: These are pre-orders and these items will not ship until October 4th!
I get pretty excited when little companies like this have chosen to go back to the retro VHS format when releasing little known and seen cult films. The awesome folks over at Mondo recently did it with 2 different VHS releases recently, both of which sold out within a matter of minutes. That just goes to show you that there are a lot of us VHS enthusiasts still out there and there's still a market for them. I kick myself for not jumping on the bandwagon over at Mondo when they were released. I'm all over it for there next release though. But now finding out that another company is doing the same thing is just exciting. I hope Massacre Video has a long and lustrous career in the cult film world.
I do remember this film coming out back in the day, mainly reading about it in Fangoria Magazine, and remembering that I was not ever able to find it. It had an extremely limited release and has long been out of print. If you ever find it online, it's sure to be ridiculously expensive.  So here's your chance to finally get your hands on a little piece of Cult Cinema history. I've already got my order in, make sure to get yours.

Massacre Video Store is Currently Down

Bad news horror fans. Seems that as of today 8-26-11, there might be a delay in getting the 555 DVD released. If you've already placed a pre-order, then your payment has probably already been refunded. But Loui is setting up payment through another merchant and once that is set up, everything should get back on track. He will then send out another announcement when he's all set up somewhere else and ready to proceed.
Check back for further details!
Here's a post from the Massacre Video website via Loui:
Posted on August 25, 2011 by admin
If you may notice, the Massacre Video store is temporarily down. Long story short, PayPal feels that I should not be able to spend any of the pre-order money to make the product! They refuse to unlock the money until I ship the product out, which is counterproductive because without the money I can not pay for the product to be created, so how could it be shipped? After speaking to PayPal representatives for hours on end, I realized I hit a brick wall and they do not care about the little company or how they could possibly corrupt it.
Within a day or so I will post again to let everyone know what is currently going on with the pre-orders! TO EVERYONE WHO HAS PRE-ORDERED, YOUR ORDER WILL BE HONORED!
I have put a lot into this project already for it to fail at the last second due to a greedy multi-billionaire company such as PayPal. I will work diligently to make sure that this is solved in the fastest matter possible.
Thank you so much to everyone that has pre-ordered and please bear with me while I try to fix this shit storm!
-Loui


UPDATE!! UPDATE!! - 8.30.11
I've just been informed by Louie that he's gotten set up with another merchant and that if you had already placed your order and been refunded because of the paypal mess, then he's probably already contacted you via email to let you know how to proceed  with your order.
Posted by robotGEEK at 8:10 PM