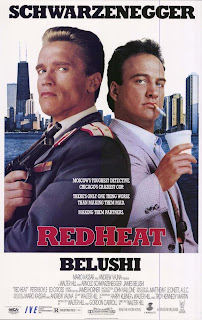 Directed by: Walter Hill
Category: Badass Cinema
God I miss the 80's. The 1980's were an action lover's dream. I mean, just look at the action films that came out this same year alone, Die Hard, Action Jackson, Dead Heat, They Live and Red Heat. Some of the best action films ever made. All in the year 1988.
How badass is Red Heat? The film begins with a fight sequence between a bunch of naked dudes in Russia, including Arnold Schwarzenegger, fighting in the snow with there asses all exposed and I don't care. Cuz it's badass and Arnold kicks all of there asses.And that's what I love about this. It get's right to the point and doesn't bother with building any history or anything. Boom! Right in the beginning. Angry naked Russians fighting in the snow. And I love how the film doesn't pull any punches or waste any time in establishing who the villain is either and what his relation is to Schwarzenegger's character Ivan Danko. Right away you know he's a nasty drug dealer and Danko is a tough as nails Russian Captain after his ass.


You can say the story is silly, but let's be honest, what 80's action film isn't? Commando? One guy going up against an army of thousands and he kills them all and lives?! Come on! But it's badass and we love it anyway. Red Heat represents writer/director Walter Hill at the top of his game. He's one of my favorite action directors from this era and here he makes things so over the top that you can't help but love this thing.
For instance, when someone gets punched it's a ridiculously loud and unrealistic punch, like in Indiana Jones, but even louder.
Ridzik (James Belushi) gives Danko (Schwarzenegger) a revolver after Ridzik's captain demands that Danko relinquish his weapon. But they never show him giving him any bullets and whenever he uses the revolver, he never ever reloads it. There magically seems to always be bullets in the 6 chambers. And in the finale when he goes up against Viktor (Ed O'Ross) in a gun fight he does check his weapon for bullets, which seems to apparently be full. And during the gun fight he clearly shoots 10 rounds out of a 6 chamber weapon.
But it's fine because it looked cool, so we can forgive little inconsistencies like that.

Schwarzenegger plays Ivan Danko, a captain in the Russian police force. He's pursuing a drug dealer named Viktor Rosta when Rosta kills his partner, and Danko kills Rosta's brother. Rosta escapes and flees to Chicago where he's setting up a huge heroin operation. When Rosta is arrested during a minor traffic violation the department sends Danko to Chicago to bring him back home to face charges. When Danko arrives in Chicago he's teamed up with Chicago Detective Ritzik and the two clearly do not get along. Rosta escapes during the transfer and the rest of the film plays like a cat and mouse game between the two because many situations present themselves where they each could have easily killed each other but neither of them take the opportunity, which is fine for us because it leads to many violent and bloody gun battles and that's really why we enjoy these kinds of films.

This is actually one of my favorite Arnold flicks alongside Total Recall, The Terminator, Conan, True Lies, Predator and T2. Cuz come on, the guy's made a lot of flicks, but not a lot of them were actually any good.
But Red Heat ranks up there with my all time favorite Arnold flicks.
You can tell they were going for kind of a 48 hours (another Walter Hill film) vibe by mixing together two complete opposites for sheer laughs.

I mean, the tagline says it all:
Moscow's toughest Detective. Chicago's craziest cop.
There's only one thing worse than making them mad.
Making them partners.


This was back in the day when they actually had tagline's for movies. They don't do that anymore.
And there are a few funny scenes here and there, but not enough to ruin the hard edged action vibe it has going for it. And that's one of the things I love about it, that it's violent, gritty, ridiculous and bloody as hell. Walter Hill is responsible for some really badass classics like The Warriors, 48 Hours 1& 2, Last Man Standing and the equally badass Extreme Prejudice, which he made the year before this one. Coming directly off of an extremely violent film like Extreme Prejudice says a lot about what kind of film Red Heat would ultimately become. It's a violent hard boiled action pick working on all cylinders.

This is one, along with Action Jackson, I would have liked to see had a few sequels. I could easily see this having had a Lethal Weapon type of status. Look at the first one. It's definitely the darkest out of the series and more serious. Riggs spends the entire film suicidal trying to kill himself and the action, violence and tone is relentless. It wasn't until part 2 where things lightened up and showed that Mel Gibson and especially his character Riggs could in fact be funny. Oh yea, there's plenty of action in part 2, maybe even more than part 1, but it's a lot funnier too as the chemistry between Gibson and Danny Glover is undeniable. Throw in Joe Pesci for added comic relief and you know what i'm talking about.
So I could see that happening with this film. Too bad they never pursued it though. I mean, shit, it worked for the Rush Hour series right?! How many are they on now, 3? And it's the same premise. Foreign police officer  comes to America and teams up with an American cop to catch a killer or whatever. I'm just sayin', it coulda worked. But noooooo, they'll green light a certified box office bomb like Green Lantern 2 while the first one is still in the theaters making no money and embarrassing all who worked so hard on it, but films that actually made a profit like Action Jackson and Red Heat and could have done wonders with sequels are totally ignored and shelved. Sometimes I just don't understand the studio system.


I strongly suggest picking up the Blu-ray release of this over at Amazon by clicking on the link below. The Blu-ray has tons of extras as well as it being the Directors Cut, which only makes this film way cooler!
Red Heat [Blu-ray]