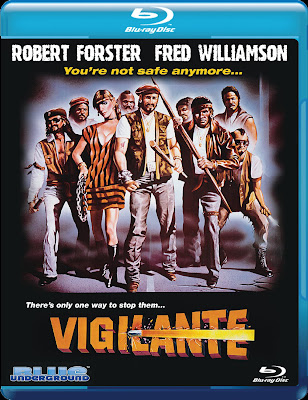 Vigilante aka Street Gang was one I had never heard of and only came across by accident. I don't remember how exactly, but when I found it and saw that it was a revenge flick from 1983 directed by the Maniac Cop helmer himself William Lustig and starring Robert Forster "and" Fred Williamson!? I almost wet myself. How could I have missed such an important film with such an awesome title like Vigilante?! I mean, I love William Lustig films, I love revenge films and throw in Fred Williamson?! I'm still kinda shocked I never heard of this one.

Robert Forster plays a regular middle class working Joe named Eddie who lives in a city overrun by gangs and crime. Most of the time people just look the other way because nobody wants to get involved or have one of the gang members on there ass in retaliation, which seems to happen frequently. Eddie works with a couple of other guys including Nick (Fred Williamson) who have taken it upon themselves to distill there own vigilante justice whenever they see fit. We're shown this right in the beginning when a lone gang member stalks and rapes a young woman in an apartment building. A  witness identifies the attacker to Nick and so he and his buddies go find the guy hanging out on a street corner one day, kidnap him in broad daylight and beat the shit outta him breaking every bone in his body. They don't kill him, because that's not what it's about. They want these scumbags to know that not everyone is scared of them and if they mess with there neighborhood, then they're gonna get them. Eddie isn't a part of this vigilante justice system yet and actually thinks that they're in the wrong as he gives off this little speech about "what makes us any better than them when we have to resort to violence?" bullshit. Nick seems to be the unofficial leader of this group of friends and often tries to entice Eddie into joining for the good of the neighborhood type of thing. But Eddie always refuses.
One day Eddie, Nick and all his buddies are at a local watering hole when Eddie's wife and son are attacked by gang members in retaliation after she confronted one of them in the progress of a crime. His wife is brutally attacked, but lives and his son is murdered. When the gang leader who incited these horrible acts is let off with a slap on the wrist by a corrupt judge and lawyer, Eddie finally see's how the corrupt legal system in his town just does not work and he loses it, deciding to take the law into his own hands in his quest for revenge.

I have to say, I loved the look and feel of this film. William Lustig gives the film an authentic gritty late 70's early 80's sleazy crime film feel in the Exploitation and Trash Cinema genre. I'm watching this thinking that they shoulda just gotten this guy to direct one of the Dirty Harry flicks. Hell, I think he would've done a better job than Don Siegel did in the first one. I don't know why everybody gets a hard on for that guy directing Dirty Harry. I mean, the movie's good but it's not because of Siegel's slick direction that's for sure. It's got a great script and a badass Clint Eastwood. With Vigilante, director William Lustig gives us a tight, taught and tension filled revenge thriller with enough suspense to keep you interested. When the action and violence comes into play, he frames and shoots it really well in good ol' fashion Cinemascope. None of it ever looks cheap, fake or low-budget. I'm telling you, this guy should've had a bigger career in this kind of genre. Most people will know the director from the cult classic Maniac with Joe Spinell and the Maniac Cop trilogy. Though truth be known he either walked off or was let go of during production of Maniac Cop 3, which was finished and re-edited by the producer which would explain why it's the weakest of the 3. Part 1 was good for what it was, but Part 2 was just plain awesome! You just can't get anymore Cult/Horror/Exploitation that Maniac Cop 2. But anyway, he's done a few other films, but not many and none that will stand out of his career more than Maniac and the Maniac Cop films. This guy just should have had a much bigger career.

So, I did like Vigilante, it's just that for the type of film it was and for the type of film I was expecting to see, I just felt that it should have been much more violent than it actually was. There was violence, but the scenes were few and far between and it's not really until the last act of the film that the revenge aspect comes into play and Eddie is on a mission of vigilante justice. Even then, while entertaining, it just seemed like it shoulda been more. There's never really any over the top violence which is shocking for 2 reasons. One) because Lustig had just directed the ultra violent and bloody Maniac in 1980 with incredible makeup effects by the one and only Tom Savini, and two) it's a revenge film called Vigilante about vigilante justice that came out right smack in the middle of the Exploitation and Trash Cinema craze of the early to mid 80's and just seems to play more like a suspense filled thriller. So yea, I was a little disappointed in the lack of violence and I don't think my expectations were unfounded.
The ending was also somewhat anti-climactic. After going after everyone who did him wrong he's left with only one person, the judge who let the gang leader go. So here you think is where the "big" climax is gonna be. This is the guy who let that asshole walk free and I swear, you don't even know that this is the judge from the beginning of the film because he's been absent for the entire playing time and when he shows up again at the end, he's not in his judge outfit and everything happens so fast that you don't believe or want to believe that it's the end because there was no build up, no explaining, planning or showing of Eddie preparing to take this corrupt judge down. It all happens in like 1 minute and a half and it's done. No big finish or anything. The only reason you know that it's the last shot of the film is because the camera slowly moves up for a crane shot. That's how you know it's the last shot, the famous crane shot before the credits. So that was a pretty big bummer. The gang leader brutalized his wife, murdered his infant son and the judge let him walk free. I was expecting much more brutal kills for that kinda revenge.

One thing that I must point out and I can't stress this enough, Fred Williamson, though playing a supporting character, owns this fuckin' movie. All I kept thinking of while I was watching is that while I dig Robert Forster in anything he does, this movie belongs to Williamson because whenever he's in a scene, it's all about him and he owns it. The guy is tough, physically imposing and a total badass in this. He doesn't even have to ham it up here, he chews up every scene like the badass that he is. I wish the film had focused more on his character here. I mean, he's the one out doing the whole vigilante thing through most of the film anyway. Not out of revenge, but out of frustration because he cares about his neighborhood and hates seeing these thugs overrun it with crime and violence. They should have done a whole series of these films with him as the star. Vigilante 3: Die Sucka! I woulda gone to see that. It's amazing, this guy has come out in "everything"! I was even recently watching an old Italian Exploitation post apocalyptic flick from the same year and he was in it! I shit you not! I was like, "what the hell is he doing in this?!".

Bottom line, it was a good entry in the revenge crime thrillers genre during this time. The presence of Fred Williamson saves this film, no doubt. If it had just been all about Forster's character Eddie, it would have been a total bore. It's a well crafted revenge thriller with great production value, camera work and actors. It just needed some more violence.
Posted by robotGEEK at 4:12 PM