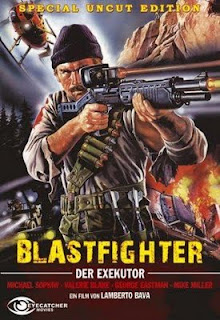 Hhhhmm, now this one was a little strange. It's a hybrid of both Rambo and Deliverance and directed by Italian horror master Lamberto Bava. For some reason, that combination just does not gel well naturally in my head. So I wasn't sure how this thing was gonna turn out. I was excited though, because the combination of horror director and exploitation "could" work if handled properly.

My verdict is that it was just alright. Not nearly as badass as the picture I had envisioned in my head. Especially since if you look for it in a Region 2 DVD (unavailable in the U.S.), it's sold as a special uncut edition so immediately your thinking that this thing is going to be violent as hell like only a gifted Italian horror director can do it. Not in this case. Honestly, it's pretty standard stuff and with the exception of a few minor changes, it's pretty much First Blood. Throw in the rednecks from Deliverance and you have Blastfighter, just with not as much action and excitement. There are a lot of fist fights and some chases here and there, but most of the action is saved for the finale and while it's cool, it's not as creative or as bloody as you were hoping for. Which still surprises me that a director mainly known for Italian horror like Macabre, Demons 1 & 2 and A Blade in the Dark would try his hand at this kind of genre without going full on exploitation. It's really tame and restrained and I kept waiting and waiting for an "oh shit!" moment but it never came. I don't know, maybe this was his attempt at a stylish back woods adventure picture. The kind of film you would never expect a respected horror director to attempt.


Blastfighter stars Michael Sopkiw (After the Fall of New York) as an ex-cop named Tiger who's just gotten out of prison after spending 10 year for killing his wife's murderer. Once released he's given this huge and crazy "shotgun" that apparently can shoot pretty much every known bullet known to man, even rockets and gas. He's given this weapon because he wants to seek retaliation on the people who sent him to prison. But in the last second he changes his mind and decides all he wants to do is go back home and live alone in the mountains minding his own business. Only thing is that the local rednecks don't seem to like him and constantly do everything they can to get under his skin. Problem is that the leader of this gang of rednecks is the brother of an old friend of his, which complicates things. In the meantime Tiger's estranged daughter shows up out of nowhere intent on starting a new relationship with her father. He'll have no part of that. But naturally he begins to warm up to her and the idea of being a father again but of course that's when all the real trouble with the rednecks begins and it's through his relationship with his daughter that the gang feels they have his Achilles Heel. The one thing that they can use to get to him. Ultimately Tiger uses his survival skills to hunt them down one by one in a tale of redemption and revenge.
It's an Italian production, so with the exception of star Michael Sopkiw and a few other barely there extras, the entire cast is Italian which means the movie is heavily dubbed, and not very well unfortunately. The dubbing is so off most of the time that it ends up becoming a distraction as the words clearly don't match the movements of the lips of any of the actors, much less the leads.
I will say, Sopkiw does play a pretty mean badass in this and it's strange that he only made enough films you can literally count on one hand and then disappeared. He's not big or imposing or anything, but man the dude can stand his own against a group of ruffians and isn't afraid to throw a punch.
If you're looking for a lower budget First Blood, then you'll probably like this. It's made really well and Lamberto Bava certainly knows how to frame a picture in beautiful Anamorphic Widescreen. It has it's moments but you can't help but think that something with a title like Blastfighter directed by a filmmaker in the Italian world of horror that this thing should have been much more spectacular. Even the poster is a little misleading with that badass gun. He's given the gun in the beginning and within 5 minutes of the film he's buried it in his home and doesn't bust it out until the very end when he's hell bent on revenge. So for over an hour it's just him with no weapon running through the woods and evading the local redneck gang using his survival skills. Even then if the hand to hand kills would have been awesome or at least a "little" creative then at least that would have made it stand out a little more, but again we're left disappointed at the missed opportunity.
Posted by robotGEEK at 7:00 PM