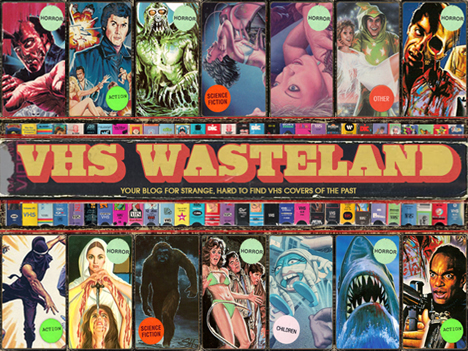 I recently came across this incredible website completely by accident. As I did a google search looking for a particular item I came across someone's blog. From there I found there list of other blogs they follow and so forth and so on. In the middle of all that, I found this banner on someones blog and was instantly mesmerized. I thought to myself, now this is a blog for me!
VHS Wasteland is a website dedicated to the long lost art of the VHS box cover. Many, many, many moons ago before Blu-ray, before DVD and before Laserdisc there was something called a VHS tape. It was kind of a big bulky cassette made of plastic and usually black. And we would insert these big black bulky tapes into a machine called a VCR player or recorder. Are you still with me? Did I lose you yet? Yes, these were actual devices that we as consumers, cinephiles and filmgeeks owned and used to watch our favorite films. VHS tapes were in the infancy of home media entertainment during this time and we were really left with no other option. If you wanted to watch a movie at home, you had to watch it on VHS, no digital nothing and almost always in full pan and scan glory. The upside these days is that most of us now have Widescreen televisions, which makes watching these pan and scan tapes a little easier than before.

For an in depth tutorial about the history and mechanics of the VHS tape, check out this Wikipedia entry by clicking on VHS Tape.

During this time a new era of art known as the VHS box cover art emerged. Because the VHS tapes had to be housed in something, they invented a cardboard box complete with cover art. If you were renting a VHS tape from a local video store, then they usually cut the box up and inserted it into a clamshell case made out of plastic for durability. Now to be completely fair and honest, the cover art was usually much better than the actual film. This was in a different era people. In the 1980's film studios hired people to actually paint or draw poster and VHS art. This is a long forgotten concept though as usually now everything, and I do mean almost everything is done with an art program like photoshop or something where they'll just mash up a couple of stills from the film, slap a title on it and vuala, you have your DVD cover. It's pretty pathetic really. Most of them these days look like some high school kid whipped up a DVD cover in art class during his break between projects. There simply is no passion anymore in creating decent cover art. Just to give you an example, look at any film from director Tony Scott's filmography. The absolute worst covers imaginable. True Romance and Beverly Hills Cop 2 might be the only exceptions. But that's it. Harry Potter is another good example. Drew Struzan, one of if not the best poster artist most famously known for the Indiana Jones films, the Back to the Future trilogy and the original trilogy of Star Wars, did the first one. After that it's all photoshoped photographs for the rest of that series and good ol' trusty Drew was out the door.

But anyway. That was decades ago. VHS covers were the shit! It's an era I remember fondly and it's an era that's sadly gone. But there are people out there like me, VHS enthusiasts if you will. And my man James Gilks over at VHS Wasteland has created the perfect site for just such a filmgeek. This site is dedicated completely to the art of the VHS box cover. Thousands of high resolution scans from films you remember as a kid, films you still watch today and shit you never thought could actually be real, but they are. It's almost like a museum for VHS covers.

If you have an old VHS cover tucked away in a drawer or closet, then pull that sucker out and see if it's one that they don't currently have in there inventory. They will give you instructions on how to properly scan them and add it to there library. Click on VHS Wasteland and you'll find tons cover scans, film reviews, trailers and much more.
If you have any questions you can contact the VHS Wasteland webmaster himself James Gilks at madhatterdesign@gmail.com for more info.
Posted by robotGEEK at 3:51 PM