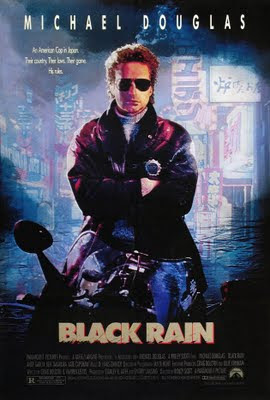 After 3 lackluster films in a row these past few days I felt I needed to reignite my passion for Badass Cinema with something familiar from my personal collection.
Black Rain is a film I deeply love. This film is so badass in so many ways and it all works so perfectly that I find myself busting out my well worn DVD and watching it at least once a year.
Michael Douglas is a total badass in here and at the top of his game. The guy just rules people. When he had that cancer scare recently I immediately started thinking of all the films I could remember that he was in and was kind of amazed at how awesome his career was as both an actor and producer and that I never stopped to think how important this guy was in the world of cinema. I mean, come on people! He's Jack Colton, William "D-Fens" Foster and Gordon Gekko!

Visually, this is one of my favorite Ridley Scott films. This was during a period in his career when Scott was doing stuff like thrillers with Someone To Watch Over Me, this and then Thelma and Louise after having made nothing but huge lavish productions in the sci-fi and fantasy genre for a few years. This is the Ridley Scott I love. Don't get me wrong, Alien and Blade Runner are some of my favorite sci-fi flicks ever as well as some of his big budget period pieces, but I miss the guy who gave us hard edged action gems like this. I wish he had made more of these. I suppose he still could, but it seems highly unlikely with word that he's now following up Prometheus with a Blade Runner sequel. But anyway, we still have Black Rain, right?!

Nick Conklin (Michael Douglas) is a New York cop with a bad attitude who works the beat with his partner Charlie (Andy Garcia). These two are the perfect good cop/bad cop combination as Charlie is just so damn likable that you just want to be his best friend, while Nick is just a prick. While they're at a local restaurant one day they witness a Japanese mafia hit by the ruthless Sato (Yusaku Matsuda) and are sucked into the world of the Yakuza.
After capturing Sato in the U.S. they are ordered to transport him to Japan, but he escapes and they are left trying to recapture him with help from there local liaison Masahiro (Ken Takakura). Immediately Nick doesn't like the stiff Masahiro and Masahiro just cannot understand the barbaric methods that Nick chooses to use while on the case. One night while in Japan Nick and Charlie are sabotaged by a motorcycle gang and Charlie is brutally murdered by Sato himself. This is the final straw that pushes Nick over the edge and it's at this point that the film ultimately becomes a film about revenge. Fuck the job and fuck the case. Sato killed his best friend and partner and now he's gonna pay.

This film has such a sharp script with really well fleshed out characters. Nick is such an ass most of the time, but you feel for the guy because though he may not be Mr. Personality, he's good at his job, takes it very seriously and is loyal to his friends. It just seems that often times he's just got too many cards stacked against him. Andy Garcia is also a real standout here. The guy is so charming and a goody-two-shoes that when he ultimately meets his demise, it hits you hard because you really wanted this guy to make it to the end. That particular sequence is a standout scene in here and really well executed.
Ridley Scott's direction is also what makes this one stand out. It's just beautiful to look at. When the action comes around, he handles it incredibly well. It's not really an all out action flick as it is more of a detective thriller. But there's still plenty of action to wet your appetite and the Japanese cityscape gives Scott plenty to play with in terms of visuals, even though they were heavily restricted because of the filming rules in Japan, which are pretty strict.

Michael Douglas, to my knowledge, hadn't really played a character like this before. And it's strange because he's so good at it. I would've loved to have seen him play more characters like this. Yea he's played a cop before, but he's never played a down and out dirty cop with a bad attitude. With films like Wall Street, The Game and A Perfect Murder he showed us how good he is at playing rich assholes. But with Black Rain he proved he can also do a badass cop like Cobra or Dirty Harry.

Black Rain seemed to have come out of nowhere in a year when big budget summer blockbusters like Batman, Indiana Jones and the Last Crusade and Ghostbusters II were ruling the box office. But it stood out in the crowd because Michael Douglas and Ridley Scott were at the top of there game and an undeniable force to be reckoned with. If you haven't seen this one in a while, do yourself a favor and give it another look and re-immerse yourself in this stylish, hard-edged detective thriller set in the world of the Japanese Yakuza.
Posted by robotGEEK at 7:11 PM