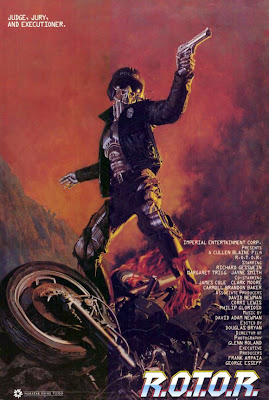 
Judge, Jury and Executioner
Was this supposed to be a comedy? Intentional or not, this is probably one of the most hilarious films (loose term) I have ever seen. I found myself laughing out loud almost the entire time and that hasn't happened in a really long time. Holy shit people, this is bad!

Now this one was just mind-boggling and completely awful in every single aspect that I could not imagine a more ridiculous film that I've seen recently that can match the incompetence of this piece of crap. Director (using this term very loosely here) Cullen Blaine has only ever done work in children's television mainly as a storyboard artist and story director, yet for some reason felt that he possessed the capability to write/produce/direct a low budget sci-fi tale of a robot cop who goes on the fritz killing anything in it's path.
You know what? I'm frankly shocked that they even had the money to hire whoever painted this poster to come up with something this cool because it's by far the only good thing about this film. Man, and I hate to use that term because I wouldn't even classify this as a film. It's more like a student project because using the term "film" you would assume there was some form of competence in the production whether it be a producer or even an editor.

Now don't get me wrong, I love a bad film from time to time. But usually if it's a bad film, it's bad because of the script and story and not necessarily the talent behind the camera or the production involved. And often times, as is the case with 3 recent films I reviewed Hands of Steel, Never Too Young To Die and Raiders of Atlantis, they often fall into the "So bad it's good" category because they are in fact, so bad that they end up being "Awfully Good". Not in this case. This thing is awful and it just stays awful.

After doing some research i'm not at all surprised to find out that almost every single actor in here has only ever been in this one film (ah! it hurts to say that word!). Especially the main guy Richard Gesswein. He's just horrible and altogether weird at the same time. I've never seen anybody deliver lines and speak like this guy does, rarely ever opening his teeth when he speaks. They are always clenched like it's impossible for him to open his mouth, but you know he can because you see him do it once or twice. Which only makes it more baffling as to why he would choose to talk this way. Everyone else in here is just as bad, the main characters especially. You can tell they've "never" been in a film (ah!) before this. The only person that even showed the slightest competence was the chick who played Coldyron's girlfriend, but she's only in it for maybe a total of 3 minutes screen time.

A plethora of WTF? moments:
Let me tell you, you're kind of thrown off guard for the first 30 minutes or so as you think this isn't going to be so bad. But the only reason you would think this is because absolutely nothing happens for this first 30 minutes or so and your bored out of your skull. It looks low budget, but since nothing is happening, you're tricked into thinking that maybe you can just write this off as just boring. Only after this long boring drawn out character setup were put into this really odd situation where this scientist stops a robbery in progress at a local gas station. Totally weird and awful that I actually yelled "WTF?!" and laughed at my television screen. I laughed and this was the first of many. So these robbers are supposed to be latino as this takes place in Houston, Texas. So the people robbing the convenience store would naturally be latino right? Well, I guess they couldn't find actual Latino's so they used white guys and had them do there most horrible Mexican accent and actually "painted" a fake goatee on them, since they obviously couldn't grow there own and all Latino's have goatee's, right? Oh man, and that's not all. When one of the robbers comes out with the cashier as a hostage (who looks to be a 55 year old little lady), she somehow turns around and starts roundhousing this guy over and over again until she knocks him out with her last kick. Fucking weird! And it's so horribly choreographed, edited, acted and executed that again, you literally laugh out loud.
But wait! You gotta hear how this other sequence plays out in the beginning, because i'm still kinda confused by it. It shows our hero waking up in bed as his alarm goes off and it clearly states that it's 5:00am. Cut to him getting up and leaving his room and the clock reads 4:50. WTF?! Then he walks into the kitchen and makes a cup of coffee, pouring an insane amount of sugar in it. Then he goes to the fridge and gets a bundle of carrots. He then proceeds to go outside to his horse with his cup of coffee and carrots and you think he's gonna give the horse the carrots while he drinks his coffee right? Instead he gives the fucking horse the coffee and "he" eats the carrots. WTF?!
There's also another scene where this guy purporting to be an American Indian (though he doesn't look it) starts going on and on about the benefits of being an authentic American Indian and it goes on way too long and serves absolutely no real purpose to the story other than to bore you. I think this guy Cullen Blaine has some thing with stereotypes. I don't know, just a guess.
And if R.O.T.O.R. takes off his sunglasses, he can see into the past. Yes, he can see into the past.

The continuity goofs are amazingly endless in here, like nobody seemed to care that one shot will not match up with the next unless they pay close attention. You don't even need to play close attention because they are so terribly obvious that you notice them right away. Like the alarm clock that can't keep the right consistent time, or Coldyron saying in one scene that R.O.T.O.R. wasn't supposed to be ready for another 25 years. Then says 50 years in another scene, then says 4 years in yet another. It's amazing really, the complete lack of competence on display here.
Special effects? Except for a really bad stop motion effect at the beginning (where most of there budget obviously went) and a couple of negative shots that are supposed to substitute for the robot cop's vision, there are none.
And contrary to what that badass poster shows, he does "NOT" look like that in this. He just looks like a normal dude with a 70's porn star mustache, cheesy 80's sunglasses that cover half his face and never once takes his motorcycle helmet off. Oh, and while were on the subject of his helmet. Do you remember way back in the day they used to sell those stickers in those coin machines that you would find in places like Wal-mart and K-Mart by the front entrance? They were kinda glittery and when you looked at it in different directions it would turn a slightly different color? Well that's what they have on this R.O.T.O.R.'S helmet. I shit you not. That's obviously a part of there "costume" department.It's of an eagle and I know with every fiber of my being that I actually owned one of those when I was a kid.

R.O.T.O.R. stands for Robotic Officer Tactical Operation Research. A prototype robot officer malfunctions and escapes from the research building and goes on a killing rampage. That's the story in a nutshell.

Oh my lord. I could go on and on about this tragic piece of celluloid. I remember when this came out in '88 and actually renting it, but I was 12 so I don't remember anything about it. And I had hoped that it would have been a fine example of "Awfully Good" in the low-budget world of cyborg cinema. Not gonna happen with this one folks.
One of the most hilarious aspects of this thing, as pointed out by another reviewer, is that the opening sequence of the film tells you exactly what's going to happen at the end, basically letting you know that you're going to be wasting the next 90 minutes of your life. Who the hell tells you how the film ends, right when it begins?!

I would normally demand those 90 minutes of my life wasted on this Terminator/Robocop ripoff back, but I must admit that I got a really good laugh out of it. So it doesn't feel completely wasted.
Posted by robotGEEK at 3:10 PM