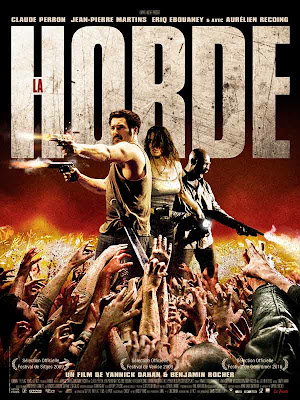 
An end of the world battle between
gangsters, cops and zombies
Wow! Now this is a fuckin' zombie flick. Having read only very little about it, The Horde defied my expectations,exceeded them and continued to kick my ass for the next 90 minutes.

Funny thing is that I've actually had this film in my possession for almost a year, and only now took the time to actually sit down to watch it uninterrupted. I could kick myself for waiting so long because in all honesty, I haven't seen an honest to goodness well made zombie flick in a really long time and The Horde certainly fits the bill. It doesn't waste any time in getting to the point and pulls no punches in it's depiction of gore and violence and just when you think it can't top itself with some crazy, over the top sequence it one-ups itself with something truly memorable. I can't remember the last time I had such a good time watching a "fast" zombies film. I'd have to say Dan O'Bannon's Return of the Living Dead (my favorite zombie flick ever) might have been the last time. I thorougly enjoyed 2010's The Crazies quite a bit, but it slowed down a lot from time to time to build up tension and suspence where as Return of the Living Dead and now The Horde are just plain relentless. This film never stops long enough to catch it's breath and the overwhelming sense of dread and survival between cops and gangsters set in a claustrophobic high rise only lend to it's inspired take on the zombie genre.

I had seen the trailer some time back, and read a few reviews and news bits here and there, but nothing really to get me excited about it. Even the trailer, at least at the time, seemed to underwhelm me. In all honesty I thought it looked like a low budget French Direct-to-DVD zombie flick and that's how it stuck in my head all this time. Boy was I wrong. Stylishly directed like only the French can do it, gorier than any horror film I've seen this year and feverishly paced with originality to spare, The Horde delivers the goods with plenty of "Oh Shit!" moments, which is a requirement for any true filmgeek.

This film surprised me in almost every aspect from the effects, to the acting, directing, pace, and structure. The film is awesome from beginning to end, but there are two standout sequences that really make this thing totally badass. One sequence is where one of the main characters Ouessem is cornered on the top of a car completely surrounded by hundreds and hundreds of zombies all wanting to tear this guy apart. Kind of like the cover poster, only he's by himself. This sequence is long, brutal, violent and beautifully constructed.
Another is when three characters are stuck in a long hallway trying to break down a door to escape. A horde of zombies are fast approaching down the long skinny hallway when one of the characters opens fire with a huge mother of a gun blowing these zombies to shreds. Another long and gory sequence that was so damn creative and over the top that I was almost cheering at how badass it was.

A group of cops charge a dilapidated building in a rescue attempt as they try to find one of there own being held hostage by a group of ruthless gangsters in one of the rooms. The rescue goes completely awry and now find themselves being held hostage. Moments later though the cops and the gangsters realize they are not alone and soon find out that the building as well as the entire city is being overrun by zombies. So now they must put aside there differences and work together to try and make it out alive.

I like how it got right to the point and doesn't try to build any backstory on any of the characters or any silly flashbacks and offers no explanation as to why people are turning into zombies in the first place. They just are and you just have to accept it. Besides, you're just trying to survive. Spending any time trying to figure out the "why" is a waste of extremely valuable time.
Definitely a zombie film worth checking out whether your in the mood for one or not. It kicks all kinds of ass. Yea, there are gonna be zombie "purists" out there who can and will rip this film apart with some of the slight inconsistencies. But if you're not trying to nitpick it to pieces then you'll definitely enjoy the hell out of this one.
Posted by robotGEEK at 12:01 PM