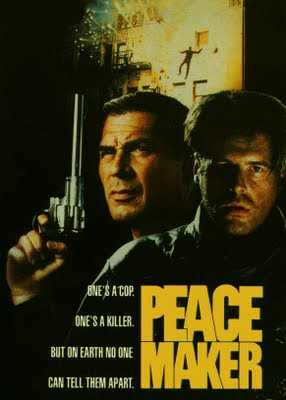 Peacemaker (not to be confused with The Peacemaker with George Clooney) was a film I remember watching a lot back in the early 90's. I don't remember if I actually had the VHS or if I caught it on cable but for some reason I kept finding myself thinking of this film now and again. It would pop in my head and when I thought about it, i'd see if I could track it down online, but so far it's never been officially released on DVD, not in the states anyway. But I kept wondering why I keep going back to this film?
Well, I tracked down a copy and now I remember why I've never forgotten this.

Peacemaker is probably the best example of B-Movie action at it's best and finest. This thing is relentless with nonstop action from beginning to end. There's never 10 minutes where there's not a chase, shootout, explosion or fight that doesn't happen. I mean, even in big budget summer blockbusters, I can't remember the last time I saw a flick with as much action as what's on display here. Peacemaker is awesome! Add in great B Movie regulars like Robert Forster and Rober Davi and you've got some great actors in here that give the film just the boost it needs to raise this thing well above average.

You have to take this film for what it is. A low-budget direct-to-video action fest with touches of sci-fi. But because of it's budget restrictions, there's not really much sci-fi in it. Maybe the opening sequence when the spaceship is shown hurtling through space and then crash lands in the ocean on Earth. But it's clearly stock footage from some old sci-fi flick but it's fine, it looks good and it works. The rest of the film is dealing with the action. Plausibility takes a back seat in favor of nonstop action here because its filled with kinda silly and ridiculous situations. But whatever! The action is awesome, crazy, nonstop and bug nuts insane!

Writer/Director Kevin Tenney has crafted one excellent piece of badass cinema which is a little weird considering he's mainly dealt in the Horror genre. He's most famously known for writing and directing Witchboard and the Witchtrap movies. Witchboard scared the shit outta me when I was a kid and is the reason to this day I will never touch a Ouija board. Thanks Tenney!
It's so weird because as he's chosen horror as his genre for most of his films, he clearly missed his calling as action seems to be more his speed. He films the action with a steady hand and so much of it is so over the top, that it's just so much fun to watch. There's some really nice action sequences here with lots of explostions, chases and gun fights. And it's all pretty stylish too. You never look at it thinking "this looks like shit!". He's definitely got a talent for filming this stuff and one wonders what he would have been able to offer had he had a bigger budget. It's all done straight and never in a campy way. Although there's never a short supply of cheesy one-liners! They really make use of the "fish out of water" scenario with all the jokes, but it's done sporadically and doesn't hurt the film at all. Some of them are kinda ridiculous like when after the female Dr. has sex with one of the aliens (they "are" anatomically correct in case you were wondering) she says "Talk about your close encounter". Ridiculous, I know.

The plot's very similar to the excellent Dolph Lundgren starring and Craig R. Baxley directed I Come in Peace and even Jack Sholder's The Hidden. Two aliens who look human land on earth. One of them is an outlaw, while the other is a cop (or Peacemaker) from there planet. Only thing is that for at least half of the film, you don't know which is good and which is bad. They play with that balance back and forth for a good half of the film as the two aliens teeter totter from good to bad or questionable behavior which leaves you wondering who's telling the truth as they both claim to be a Peacemaker. Which is fine because it's all part of the fun. The aliens themselves seem to be able to get shot, lose limps and burn to a crisp but are able to regenerate within a few minutes and they're fine again. So it's kinda fun watching them get blown to shreds only to be able to come back.

Logic is almost non-existent in this film. There are a lot of things that happen where you wanna yell "aw, come on!", but like I said, you gotta take this film for what it is. Like for instance, knowing how to drive a car, shoot a gun, load a shotgun, ride a motorcycle, etc., etc. None of it's ever explained as to why two aliens from another planet who just arrived here on Earth know how to just automatically do these things. But who cares! You want to see shit get blown up and shit gets blown up here real good!
This is so much better than you expect it to be or this kind of film. It ranks right up there with The Hidden and I Come in Peace in terms of direct-to-video action/sci-fi badassness.