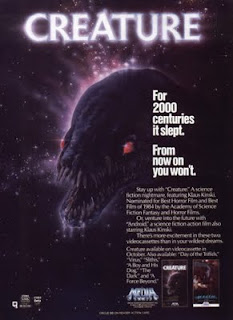 I'm really trying to find something nice to say about this flick, but it's really hard. I sat through this thing waiting and waiting for that "oh shit" moment, but it never came. At least an "oh shit" moment woulda been something to remember this thing for. I had recently come across this forgotten piece of 80's sci-fi cinema and I foolishly thought to myself "What if this is one of those forgotten gems? One of those older flicks that I always meant to watch but never got around to. What if it's badass!?". NOPE!!!

Creature is a blatant ripoff of Alien through and through, right down to the creature design. That just needs to be known right from the start before I get into anything else and even if I didn't say anyhing, it's painfully obvious right from the beginning. I mean, it's like they weren't even trying to hide that fact. It's a B-movie creature feature with a decent budget, but because of it's inept writer/director it languishes in mediocrity for the entire duration. Even as a ripoff, had it been creative at least in it's visuals, that would be something. You could easily say "well the story and script were kinda lame, but it looked awesome!". Nope, not here folks. And that's really going to be the biggest complaint here, the many missed opportunities to take full advantage of the sets, atmosphere, effects and even the creature itself.
Writer/Director William Malone proves without a doubt that he's just not capable of handling such a project. The entire film takes place in space either on a space ship or an unknown planet, but the director films almost everything in closeups that you can't see anything and it's so frustrating. And i'm talking "everything". You never get any sense of space or atmosphere, only little hints here and there and it's such a waste. Everything is filmed in tight shots either closeup of the face or from the chest up. I swear it felt like I was watching a soap opera or something. Even with the framing of the shots and where he sets the camera, it's just so incompetent. It felt like I was watching a film by a first time director who overextended himself by believing he could handle a science fiction film. You're frustrated sequence after sequence and when it finally comes down to the big fight with the last of the crew and the alien, again you wanna scream at the television because again it's a closeup that shows nothing.

If this film had any good points it's three things.
First) The gore effects, of which there are very few, are actually pretty decent. You see a head explode and a face get ripped of it's skin. Wow, now that I think about it I think those were the only cool effects shots. Wow.
Second) The model and optical effects work are pretty top notch here. I never once thought it looked cheap or fake and actually outdoes a lot of other science fiction films that had come out around this time.
Third) I don't know how, but somehow they got the legendary Klaus Kinski to appear in a brief but memorable role here. I still struggle as to why he would agree to appear in something like this, but he does and you can tell he's having a blast. He plays strange like nobody else and whenever he's on screen, he completely outshines his costars.

It's more of an ensemble piece, but the other actors in here are OK I guess. Mostly unknown except for two of them. The main female character Beth (Wendy Sschaal) I remember from Innerspace and the totally awesome The Burbs (one of my favorite films). In The Burbs she played the sexy neighbor married to Bruce Dern's character. The other actor I recognized was Lyman Ward who played Ferris Bueller's father. Other than them and Kinski all the other actors are forgettable, as is the film itself.


William Malone I remember for making The House on Haunted Hill. But he mostly does television work, where it looks like he belongs. The guy just doesn't have the chops to do stuff like this. If it had at least had a visually impressive director who made better use of the atmosphere, surroundings and who had some skill with a camera then this could easily have passed for slightly entertaining. But I felt drained and annoyed as hell at all the missed opportunities. I remember this had a small theatrical release and i'm frankly shocked. Don't feel like wasting my energy on this one anymore, it sucked.

Posted by robotGEEK at 7:20 PM