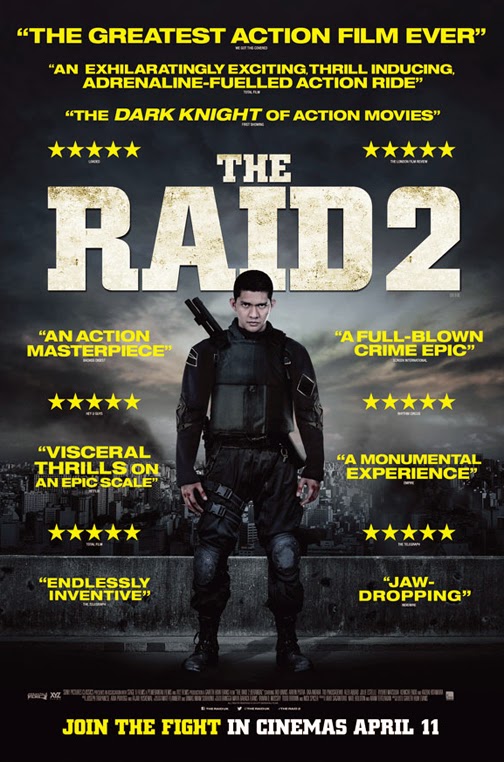 It seems like I've been waiting forever to finally see this sequel to Gareth Evans brilliant Indonesian action-fest The Raid, after I'd first heard that it was being made. Having premiered at film festivals to critical acclaim and then a very limited theatrical run, it quickly became a cult favorite as one of the bloodiest, most violent and thoroughly entertaining action films ever made. To this day, I don't know anybody who doesn't love The Raid. Having retained it's popularity over the years as one of the best action films made in the last 20 years, of course they decided to make a sequel, because that's just how things work in the film industry.

Welsh born Writer/Director/Editor Gareth Evans returns again for this sequel and again, teaming up with Iko Uwais, the star of his two previous films Merantau and The Raid. Out of habit I think we expect more or less the same when it comes to sequels. However, a good 5 minutes into The Raid 2 and you know you're in for a completely different experience than the first film. Whereas the first film is a gritty nonstop bone-crunching and violent assault on the senses steeped in a frenetic handheld visual style that thankfully never goes too far into shaky-cam territory, this sequel picks up minutes right after the events of the first film and with it's opening shot, you notice you're in for a more streamlined and visually impressive film. A more mature action film if you will.

And that's not only where the differences end. When the first film blew our minds with it's nonstop action and it's fairly simple premise, this sequel seemingly takes a different slower approach and instead offers us more of a crime drama than an action film, which I think surprised a lot of people, myself included. On that note, I can understand why writer/director Gareth Evans wanted to go a different route. I mean, why make the same film all over again right? To his credit, he pulls it off pretty well for the first half of the film. Yes, it's not the type of film we were expecting, but visually and thematically, it's a completely different ballgame and he shows us that while he's great at directing, editing and choreographing some amazing and intense fight sequences, there's more to his talent than just showing us how many different ways he can make us yell "Oh Shit!". But here's the thing, while his attempt at crafting a mafia type crime drama centered around two clans trying to gain control is admirable, it's also nothing new. It's the same old story we've seen countless times before where a a spoiled son of a major crime boss is wanting more power than his old man will allow, and soon begins secretly plotting his takeover of the family business with the help of the enemy. While Evans throws in some random action and over-the-top violence here and there, this first hour and a half feels like a completely different film altogether and you're kind of thrown for a loop wondering when will we see the carnage that made the first film so great. Oh it comes, and it's pretty fucking fantastic.

The Raid 2 is a long film, perhaps even too long for it's own good clocking in at two and a half hours. The first hour and a half I kept wondering when the action was going to finally settle in, because while it was sprinkled throughout in this first half, it's just not enough to satisfy, and not nearly enough of what we were expecting. Don't get me wrong. As a crime family drama, the film looks great. Evans is an immensely gifted director who knows how to frame a shot and get the most out of his surroundings. Being that he's only directed 4 films to date, he's an insanely accomplished filmmaker, pulling off some camerawork that is practically unheard of this day and age. But here's the problem. The story get's so involved with this father/son crime family inner struggle and the warring sides that the real star of the film, the central character of both of the Raid films, Rama, takes a backseat to this mafia style setting. Somewhere in the midway point I began to think "I thought Iko Uwais was the star of this?", because it certainly didn't feel like it. This is where I think some of the film begins to lose it's way.

Then this film hits the hour and a half mark and things change drastically. Remember when I said earlier that you're kind of left wondering when the action will finally for the first half? Well it comes at the 90 minute mark and it doesn't doesn't let up for one full hour. I'm not kidding. For an entire 60 minutes we're treated to an insane assault of heart-stopping violence and bloodshed that does it's absolute best to top anything seen in the first Raid film. Does it succeed? Eh, kinda. Everything about that last hour is about as heart-stopping and intense as could be, yet there's so much of it that after 30 minutes or so you're kind of desensitized to it. Not that it's any less enjoyable, because it's not. This last hour of bloodshed is executed with such expert precision - the kind you don't ever seen even in big budget theatrical releases anymore - that it's hard not to be impressed not only by it's brutality, but also by the fluidity in almost every aspect from the choreography, the camera angles, and the punishment these stuntmen put themselves through for a split second scene. This plethora of amazing and technically awesome fight sequences hark back to the golden age of Hong Kong Cinema when the likes of Jackie Chan, Sammo Hung and Yuen Biao were dazzling us with there superhuman abilities. While films like Crouching Tiger, Hidden Dragon, The Matrix trilogy and even most recently with Keanu Reeve's directorial debut Man of Tai Chi have tried to duplicate the look and feel of these choreographed fight sequences, none of them have been able to do it as successfully as Gareth Evans has done with his Merantau, The Raid and now The Raid 2.

The Raid 2 has been pretty divided among it's critics. And after having finally seen it, I can understand why. It's not the same type of film we were expecting it to be. Gone is the claustrophobic, dark and suffocating setting that added to the films constant sense of dread and uneasiness. But paired with it's nonstop assault to the senses created an experience unlike anything seen in action cinema in decades. With it's sequel, we have some beautiful cinematography that takes full advantage of the films often stunning locations, as well as it's gritty underbelly. It's obvious Evans has grown as a director. You can sense that between Merantau and The Raid, but it's on full display here and visually, this film is stunning and a vast improvement over the first film's more freestyle approach.

On a structural level though, this sequel is a completely different beast. Essentially taking the concept used in films like From Dusk Till Dawn, where you basically have two films in one shifting gears and genre's at the halfway point, this film starts off as a crime drama with a slow-burn approach. It's first half is rich with style and substance and is more concerned with trying to tell an engaging story about power and family turmoil within a crime syndicate than numbing us with endless violence. Yet it spends too much time dealing in all this. How do I know? Because I kept looking at the clock wondering when the carnage would begin rather than enjoy the film. But them BAM!! It's second half grips us by the throat and reminds us why we love these movies in the first place; the bone-crunching martial arts action, the sometimes shocking and brutal action sequences and the endless "Holy Shit!!" moments for a complete and full hour.

Final Thoughts:
Though I personally feel they could easily have cut a good 30 minutes out of the first half, the I-can't-believe-what-I'm-seeing second half more than makes up for any of the issues the slower "crime family drama" portion had to offer. This last hour is fucking insane! Don't go in expecting more of the same thing and you'll definitely enjoy it for what it is. I don't think it's going to blow you away or leave the same kind of impact the first one did when you first saw it, but writer/director Gareth Evans attempted to give us something different rather than the same ol' shit and in my book, he succeeds. On a side note, I'm quite frankly shocked that Hollywood hasn't gone knocking on his door yet.

Lastly, I've just got one question. Why the hell isn't Iko Uwais a bigger star yet? Why is he only starring in Gareth Evans films? This guy's insanely badass and a solid actor to boot.
Posted by robotGEEK at 10:32 AM