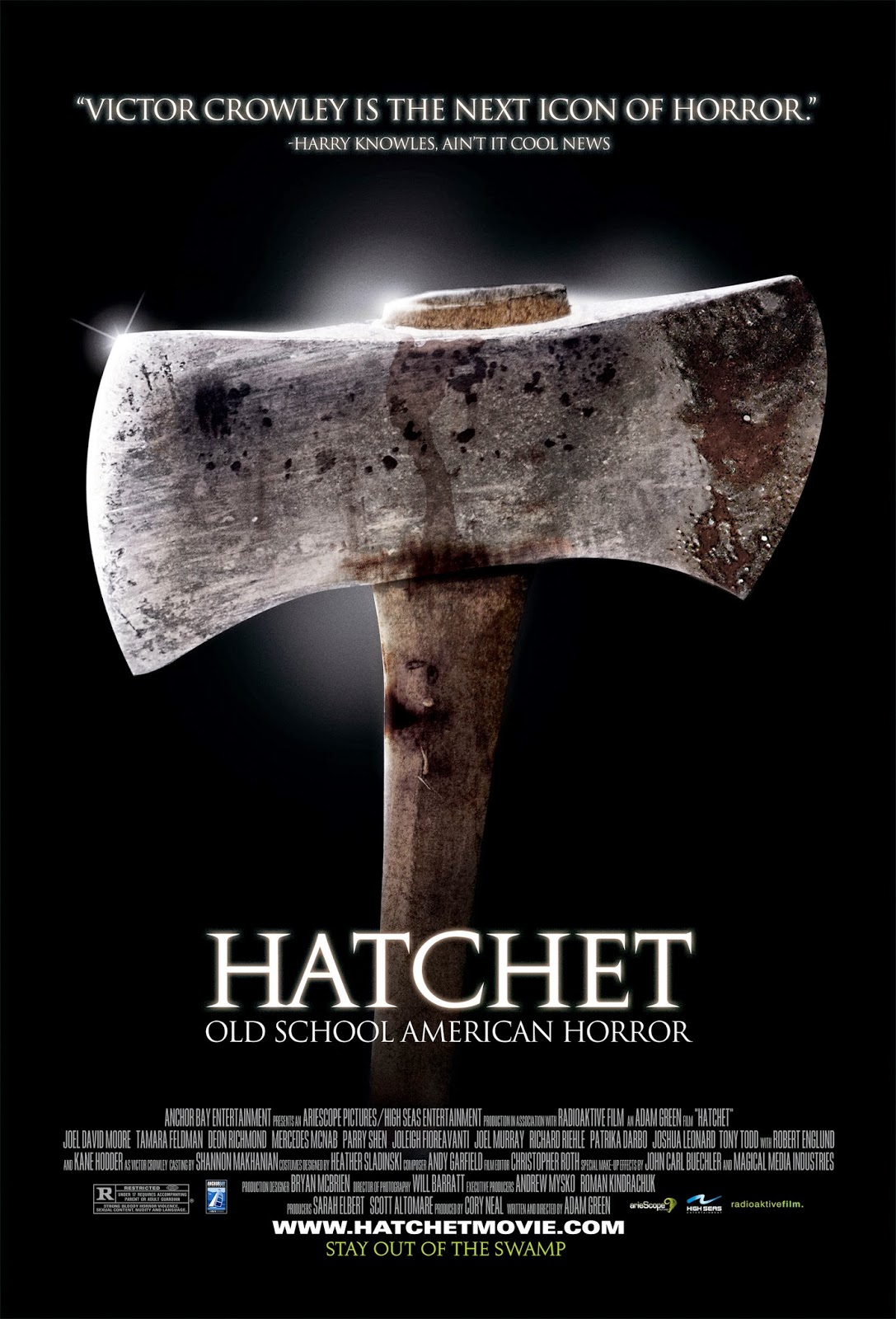 The Hatchet films have been on my radar for what seems like ages now. Writer/Director Adam Green's love letter to 80's slasher films, the Hatchet series (of which there are 3 to date) have always popped up here and there on horror lists and articles, but for the life of me, I can't recall anyone ever really saying much about them. That is until recently when they were mentioned in a recent article praising writer/director/producer/actor Adam Green's passionate and spirited homage to the slasher film genre. A genre that's been pretty dormant for a while if you think about it. A throwback to 80's slasher films? Fuck yea. I'm in.

Hatchet is without a doubt one of the most fun, potent and entertaining horror films I've seen in.......hell, I don't even know. I can't remember the last time I had such a blast watching a horror film, and that's the truth. You see, it's evident right from the beginning that first time writer/director Adam Green, clearly an old school horror fan, has taken everything we love about these films - 80's slasher films to be precise - and has crafted a loving homage to these films using all the standard tricks that made us love them in the first place. Everything is successful in this. What's more, he cleverly mixes tongue-in-cheek humor that never gets in the way of the actual horror, effectively balancing the two in a way that horror writers today should seriously take note.

A group of friends and tourists take a swamp tour in New Orleans, in the hopes of witnessing some ghost activity. When their boat gets stuck and they're forced to wander through the woods to get back to the city, they encounter something much more terrifying. The very real Victor Crowley, a deformed brute who was accidentally killed by his father with an ax to the head, who now resides in the swamp as a legend, killing anybody who wanders near his home. With a passenger on the boat who has an agenda all her own, they must work together to survive this terrifying night and hope to make it out alive.

What Adam Green has done here is given us a new horror icon to root for, and his name is Victor Crowley. In the flood of constant remakes, reboots and sequels, a new unstoppable killer roaming around hacking people left and right is quite refreshing. Other than the character of the Collector in both of Marcus Dunstan's films The Collector and The Collection, I can't think of another recent "new" horror franchise that so closely ties with the straight-forward slasher formula and so effectively. Not only that, he's taken a solemn vow only to use practical effects work when dealing with the gore, and let me tell you, it's spectacular. As practical effects work becomes more and more limited as everything is heading towards CGI (even squibs in action films for gods sake!), it's refreshing to see someone take the time to spray the screen with blood. In horror films, the kill sequences are the money shots, right? Green knows this, so he's hired one of the best in the business, and his name is John Carl Buechler. And let me assure you, he does not disappoint. The insanely over-the-top kills in here are nothing short of brilliant, and a testament to the power of good practical effects work. 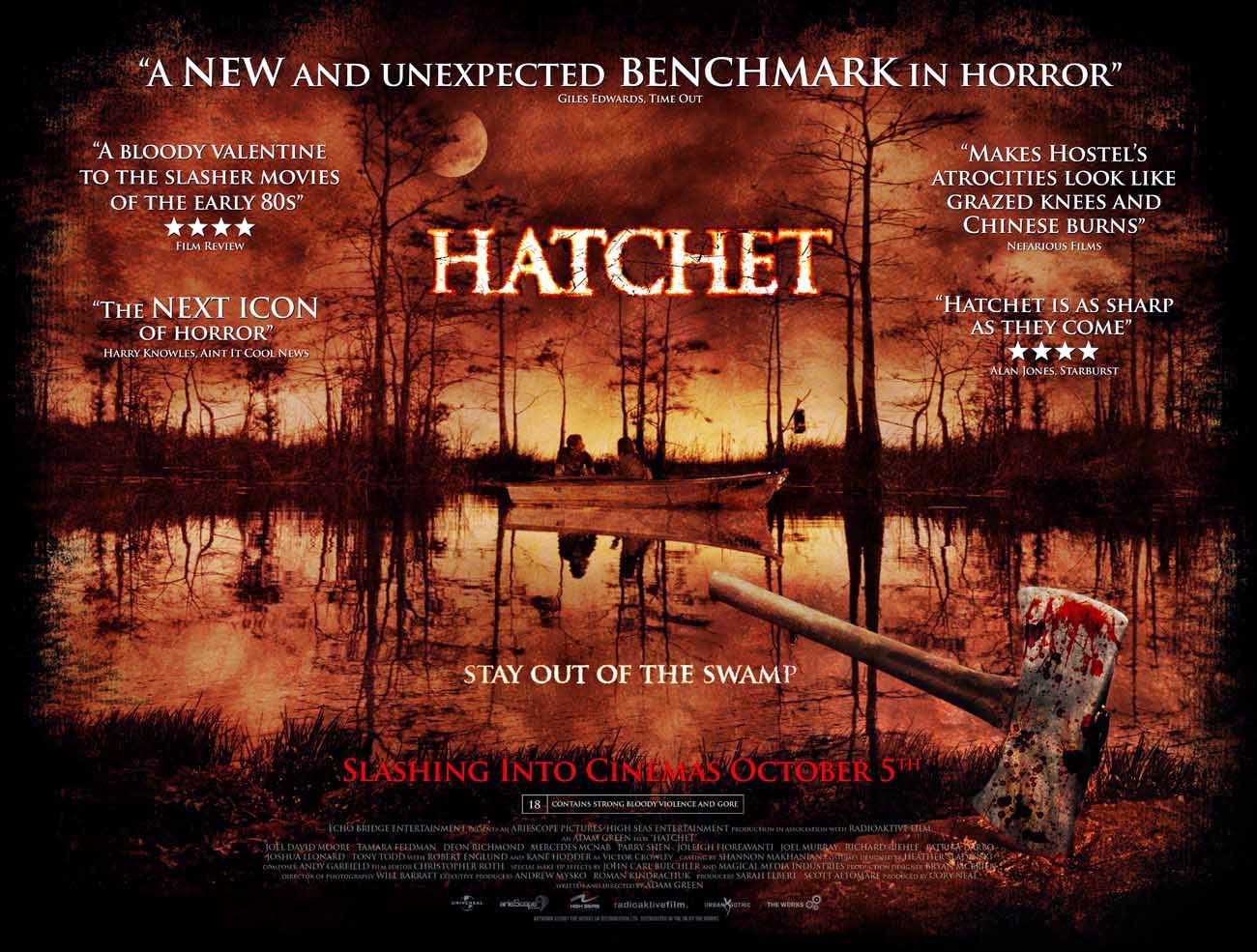 Adam Green first conceived the idea of Victor Crowley when he was 8. Having spent his life idolizing horror greats like Freddy, Jason, Leatherface and Michael, he knew what kind of horror film he wanted to make if he ever got the chance. When he was trying to get funding, he put a small crew together and shot a fake trailer to show potential backers what he was going for, which ultimately secured his financing. When you watch Hatchet, his passion for the genre is written all over the damn thing. It's funny when it needs to be, yet not too funny and never involving the horror elements. At the same time, it's a thrill-a-minute ride when it's on full-on horror mode. When the money shots come, they're worth every cent the price of admission. Best of all, it's far more clever than it has any right being. While nothing new or original, he's taken all of the best elements of our favorites and spun them into a paint-by-numbers storyline with all of the familiar trimmings that make these slasher films so great, yet implores some clever dialogue and kills that makes it leaps and bounds better than some of the later sequels of even the most popular horror franchises.

Kane Hodder. Robert Englund. Tony Todd. Sometimes you can judge a book by it's cover and you're spot-on, and none is more evident than in the casting of Hatchet. Just look at that roster! Furthermore, a film that is brave enough to introduce us to, and ceremoniously kill, none other than Robert Englund in the first 15 minutes in glorious fashion is a ballsy one. Next to The Collection, I can't think of a better opening sequence, or a more gruesome one. It's the perfect little taste of what's in store. Though Englund only scores a cameo, as does Tony Todd (Candyman), it's really Kane Hodder (Friday the 13th Parts 7-X) who's front and center and he's as perfect as you could imagine in the role. Not only does Adam Green give the perfect platform to do what he does best - slice and dice people to bits as one of the best killers-under-prosthetic-makeup out there - but he also gives Hodder some room to flex his acting chops in a few flashback sequences that prove that the guy can indeed act without all the makeup. Kane Hodder is good both in and out of 30 pounds of prosthetic makeup, and Hatchet is yet another reminder why he is the best at what he does.

But it's not just Hodder's show here. Though Robert Englund and Tony Todd only sport cameo's in this, they're damn killer ones. What's somewhat impressive is the films rather large eclectic ensemble cast, you know, the group of tourists taking that swamp tour. Largely a group of stereotypes, Green managed to inject enough funny and witty dialogue that they never come off as annoying or unlikable. Quite the opposite. Despite being tokens of typical slasher films, the casting of talented fervent newcomers along with well-known seasoned character actor notables like Joel Murray, Richard Riehle and Patrika Darbo make this cast standout as an enjoyable one.


Hatchet is arguably one of the best examples of the term "throwback" that I've come across so far. While The Collection is a close second, I think the cleverness of this first entry in the franchise goes so much further in every department than you expect it to, that combined with writer/director Adam Green's uncompromising passion, results in easily one of the most fun horror experiences I've had in the last 20 years.

Okay, so now that we see what makeup effects wizard John Carl Buechler is capable of, can we please get an uncut version of Friday the 13th Part 7: The New Blood?? Which, as you know, was Buechler's drastically cut and edited directing gig in the Friday franchise.

Posted by robotGEEK at 1:59 PM