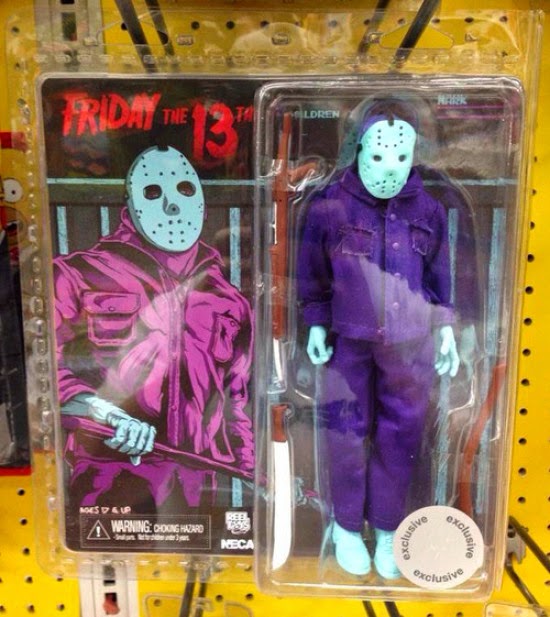 Okay, so this is the first time I've ever done this and I know, it's kinda lame but hey, drastic times cause for drastic measures. Being a collector, every so often a line of figures or collectibles come out that gets me really excited and reminds me why I never gave up collecting figures in the first place.

When NECA started their line of 8 Bit figures based on classic video games, I found my new favorite line. With these figures, NECA went above and beyond to create something that caters to the nerd/geek in all of us, especially if you're in your 30's and grew up in the 80's playing these original NES video games. Dude, even the packaging is stellar. If you want to get caught up in their growing line of these badass figures, check out my post about them HERE.

But back to my point. I recently learned that Toys R Us and NECA would be releasing this Jason 8 Bit figure, a variation of the very first figure in their line (The SDCC Exclusive), and the most sought after. This new figure resembles more of the MEGO dolls of the 70's, and well you can only imagine my excitement at learning of this figure/doll's release.

But there's a problem. I live 36 miles away from the nearest Toys R Us. So driving to and from their location is not an option for me because flippers have most certainly snagged them all by now, which would make it a wasted trip, especially considering how much gas is these days. So that's my dilemma. Next to the 8 Bit figures and the Michael Keaton 18 inch doll NECA has released, I can't remember the last time I've been so excited for something.

So I was wondering if any of you are collectors also, and if you frequent your local Toys R Us on a regular basis. If you do, I was hoping that maybe one of you would find it in your heart of hearts to pick one up for  me and ship it? I'd be happy to pay whatever the asking price from Toys R Us plus shipping would be. I have a paypal account and would be happy to send the funds ASAP. But I refuse to pay the ridiculous fee's flippers are asking for, which currently is anywhere from $50-$75. Ridiculous! If anyone is willing to help a brother out, I'd be most obliged and insanely grateful. Please post a comment if anyone out there can help. Thanks!

UPDATE:
Through several outlets via Facebook, I was informed that Toys R Us had finally put a number of these exclusives on their website on Friday, Sept. 29th. Knowing how hot this release was and how flippers have been raping collectors with ridiculous prices, I knew it wouldn't be long before they sold out, which they did in just a few hours, but not before I was able to snag one for myself. Sometimes the stars align and the universe throws me a bone from time to time. Thanks to anybody who took the time to try to find one of these for me.

.jason
Posted by robotGEEK at 7:30 AM