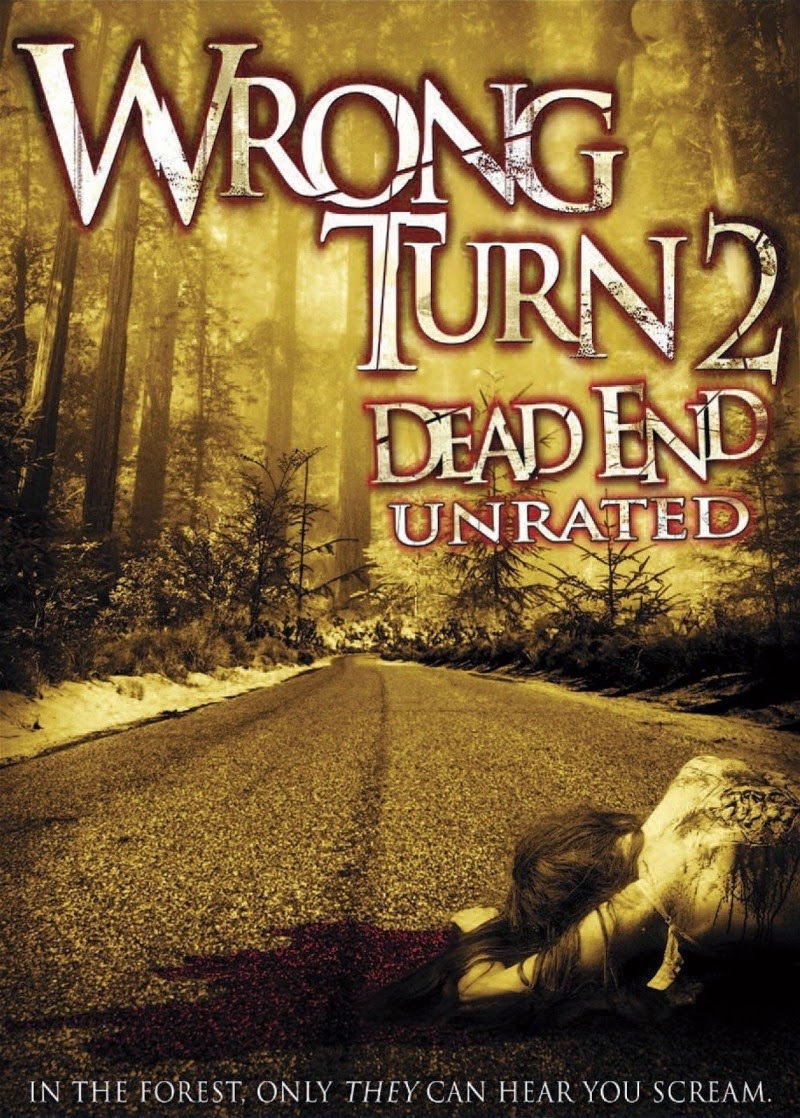 I had no preconceived notions going into Wrong Turn 2. In fact, I've never actually seen this first one. It just always looked like one of those soft horror films starring current hot TV stars, so I never gave two thoughts about it. And from what I've heard, much like the Texas Chainsaw films, none of them really have anything to do with the other so you can watch these out of order and not be lost. But as I'm recently discovering, there are a lot of low-budget DTV horror films out there from the last 10 years that I easily dismissed for being trite low-budget garbage that are actually pretty damn good. Along with the likes of Feast and the Hatchet series, Wrong Turn 2 is one of those films.

Let's get something straight. Joe Lynch's Wrong Turn 2 knows exactly what kind of film it wants to be. What is that exactly? I'm glad you asked. A horror film. Duh! But no seriously, a straight-up old school balls-to-the-walls bloody horror film and in that department, it succeeds and it is pretty damn awesome.

Wrong Turn 2 is indeed a low-budget affair, and looks as such. Every once in a while when you watch a DTV or low-budget flick, you're surprised at the caliber of quality presented to you on the screen and you wonder why it never went to theaters if it looks so good and is made so well. Such is the case with the first Hatchet film. That is not the case with Wrong Turn 2. It looks like a low-budget film and feels like a low-budget film. But that's also one of it's strengths since the filmmakers have much more leeway in terms of gore content and holy hell does this film deliver. Much like Adam Green's Hatchet and Hatchet II, the kills are so ingenious and blood spillage so extreme that when it comes to old school type horror films with practical effects work, these films are just about the best in the bunch.

Needless to say, there's nothing new or original about Wrong Turn 2. It's pretty standard as far as backwoods horror films go, except they add the element of a reality show into the mix. Thankfully, the film doesn't play to the reality show format, it's just a ploy to get a bunch of people into the woods for a specific purpose other than hunting. So you can breathe easy, it's not a "found footage" atrocity. Instead we have a group of people on a Survivor type of reality show that takes place in the woods led by ex-Marine Dale Murphy (a very badass Henry Rollins). They soon discover they're not alone in these woods, which also happens to be home to a family of deformed mutant cannibals. Don't you hate it when that happens?

I'm not going to say that WT2 is anything other than it's trying to be because it is what it is and sometimes, that's all we need. It's a low-budget horror film with a high body count, plain and simple, and for your money, you can't go wrong here folks. The kills - some clever, some not so much - always go that extra mile in trying to shock you and in that department, Wrong Turn 2 gleefully succeeds on a level that you're just really not that used to anymore, which is damn refreshing. I'm telling you, some of the shit in here, I've never seen on screen before. Even during the opening credits sequence there's a kill that.......quite honestly, blew my mind. And it's execution was nothing short of brilliant. That's the kind of shit I want to see in a horror film and that's the kind of shit Wrong Turn 2 delivers on a level that's purely satisfying.

If there was anything that Wrong Turn 2 could have benefited from, it may be a stronger director. While some of the kill sequences were quite ingenious, for the most part, Joe Lynch's directing style is exactly what you'd expect from a DTV horror film, and that's not saying much. To learn that he hasn't directed much since, save for a few short films and last years geek comedy Knights of Badassdom, isn't a surprise in the least. But it's a minor complaint because in all seriousness, it's not all that bad. Some sequences were pretty impressive, usually the kill sequences, and the rest is passable compared to some of the trite stuff we've grown accustomed to over the years, most notably John Gulager's banal and unimaginative "all over the place" style of directing depicted in Feast, another practical effects load of fun. Joe Lynch's camerawork is thankfully, a few levels above that, but above all else, his passion for gore and practical effects work is inspiring. And on another plus, the large ensemble cast is a solid one. Much like in the first Hatchet film and well......any slasher film that inspired the Hatchet series, you have your token characters; the slut, the black guy, the nerd, the tough die-hard contestant, and so on - but the casting was better than you'd expect and for that, I give the casting department props.

Here's what you need to know. It's low-budget. It's got some insane and brutal kill sequences. It's done entirely with old school practical effects. The ensemble cast isn't annoying. Henry Rollins as a marine is just a badass, the kind of role you wish he got more of. And it's one of the best examples of a throwback horror film in the last 10 years. What more could you ask for?