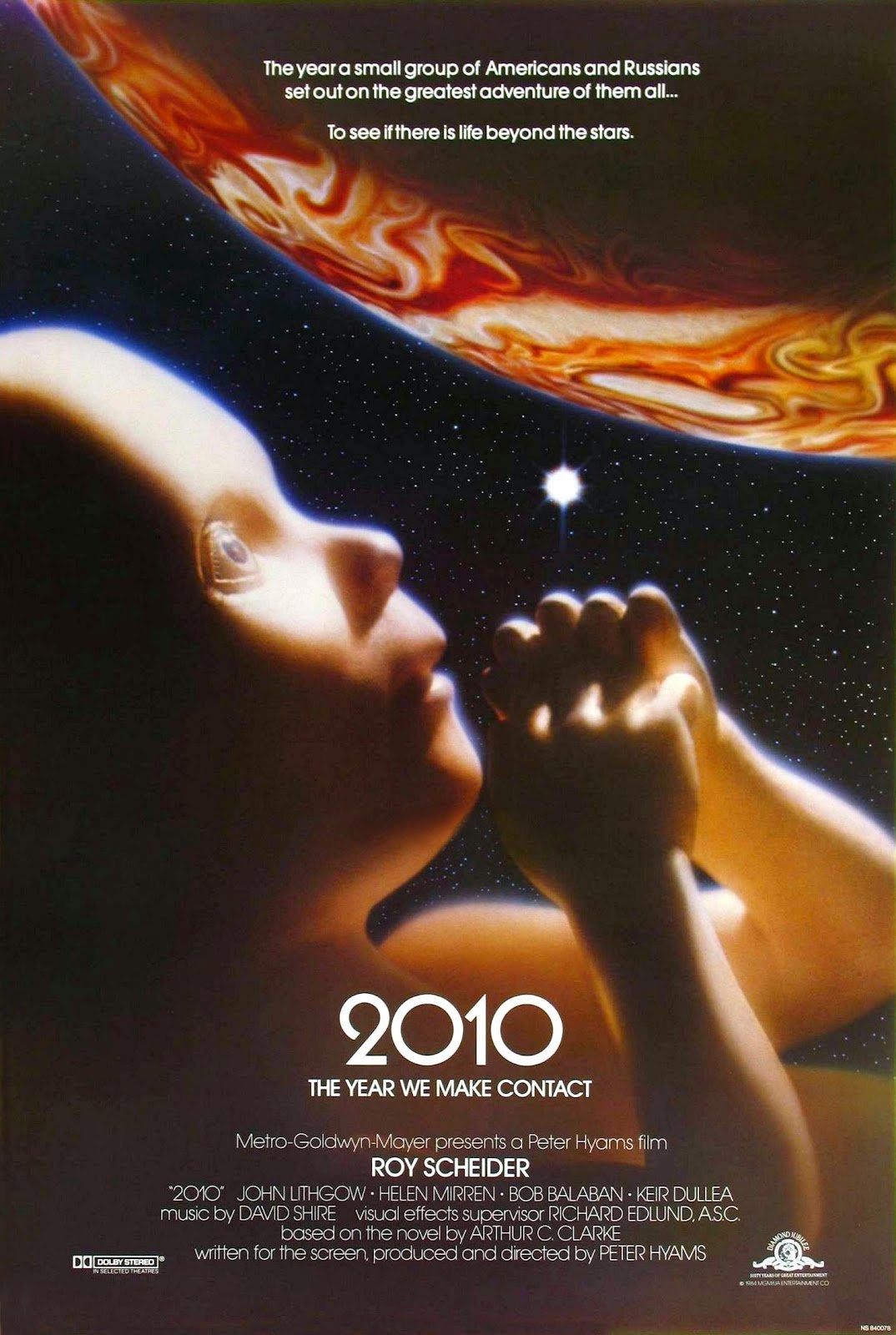 Here's a confession. I only recently saw Stanley Kubrick's 2001: A Space Odyssey for the very first time this past year. Gasp! Yes, it's true. I honestly don't know why I never took the time to see it either. But when I recently watched the stunning blu-ray, I was floored in a way that movies don't often affect me. It literally blew my geek mind. I became obsessed with 2001 and devoured every documentary I could find on it, as well as probably watching it a good half a dozen times within the next few weeks. 2001 easily became one of my top 3 favorite films of all time, and it will always be.

One of the things that's most impressive about 2010, besides Hyam's stellar camerawork, is the casting. Roy Schieder (always brilliant), Helen Mirren, John Lithgow, Bob Balaban and hell, even Keir Dullea, surprisingly, makes an appearance and of course, Douglas Rain returns as the voice of HAL; all deliver top-notch performances, as you'd expect. Along with some impressive model and special effects work, Peter Hyams's 2010 is a well made technical achievement, but does it hold up against Stanley Kubrick's monstrous seminal masterpiece?

No, it doesn't. But that's okay, because what film can? What Hyams has done is created a moody, atmospheric, and often times tense-filled science fiction film that can easily go up against the best of them in this genre. While it's nowhere the level of awesome that Kubrick gave us with his groundbreaking film in 1968, 16 years before this films release, working from another novel by Arthur C. Clarke as the foundation, Hyams has crafted arguably one of the better sequels to a great film that nobody ever talks about, yet doesn't get enough credit where it's richly deserved. I'm really surprised myself. If this past year has taught me anything, it's that there are a ton of great sequels out there that nobody ever talks about. Worse yet, there are great sequels that don't get the proper recognition or releases they need. Case in point, Exorcist III and Psycho II right off the top of my head. I actually found these two films more entertaining than the originals, and the fact that even as a sequel, nobody ever mentions them is staggering. Does 2010 fall into that category? Definitely not. But it's a good sequel as far as sequels go and my point is that even as a science fiction film, I find it rather surprising that outside of a sequel, it's never mentioned as a great example of sci-fi thriller on it's own merit.

Worse yet, that it's never received a decent DVD or Blu-ray release is beyond perplexing. While there has been a Blu-ray release going back to 2009, it seems Warner Brothers made no effort to clean the print up or fix some of those annoying special effects issues commonly found in early 80's films where you see pesky boxes around an effects shot that makes it stand out against the rest of the background. If you owned the original Star Wars trilogy on VHS back in the day you know exactly what I'm talking about. And if you read any reviews for this Blu-ray, it's pretty unanimous; a good film has been given a massively inferior Blu-ray release. Only time will tell if WB ever rectifies that.

2010: The Year We Make Contact is a sequel in every sense of the word. It picks up years after the events of the first film. The world is in tension, with threat of war looming overhead. Dave Bowman is still missing, and the presence of the black monolith is still unexplained. A U.S. and Soviet joint expedition is sent to Jupiter to try and reactivate HAL in the hopes of figuring out what happened on that fateful day years ago.

If you've ever seen 2001: A Space Odyssey, it is your duty to see this sequel, if for no other reason than it will help 2001 make much more sense. A lot of  it was never fully, or even partially, explained. In the case of 2010, author Arthur C. Clarke and writer/director Peter Hyams at least attempt to explain questions and ideas that lingered ever since the original. Like, "What is the black monolith?".

Having been made in 1984, seeing some visually creative futuristic design schemes through the eyes of the films production designer and set decorator circa the early 1980's are another standout. I wish design and decor really turned out the way the early 80's envisioned it. Regardless, Hyams, who usually always works as his own Director of Photography/Cinematographer, utilizes the design aspect to his full advantage, giving the film a rich visual sheen that compliment his assured visual approach.

Much more of a conventional science fiction film compared to Stanley Kubrick's audacious original, what it lacks in ambition, it makes up for in it's more straight-forward approach to filmmaking; the downside being that it's lacking any real creative spark. With 2001, Kubrick implemented elements and ideas never before seen on film. In fact, I can't recall any other film ever that utilized a lot of the stylistic and creative choices found in 2001, or since. 2010 has none of that. What it does offer is a solid science fiction film that takes it's time in telling it's story. No gimmicks, no experimental tactics, and no surrealism. It's a smart, slow-burn science fiction film that doesn't offer scares or action, but rather a thinking man's sci-fi tale full of intelligent ideas with style to burn. It's without a doubt a film worth checking out.