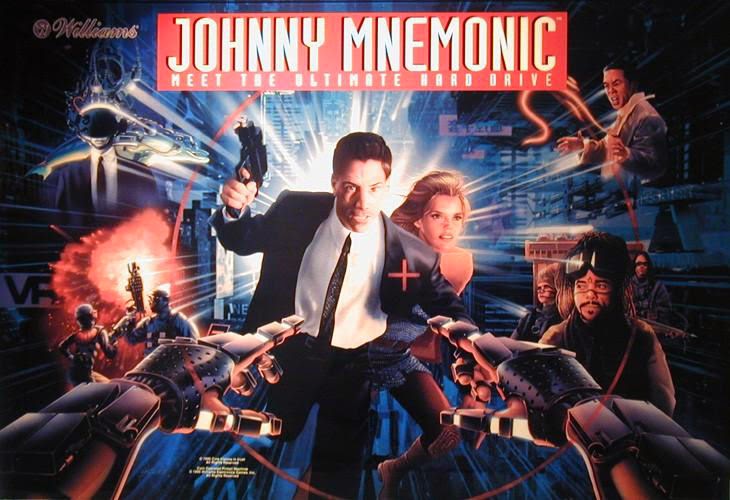 About a year ago, fellow blogger and film reviewer Francisco over at The Film Connoisseur did a thoroughly enjoyable and informative review of this mid 90's cyberpunk effort starring Keanu Reeves, and written by godfather of cyberpunk William Gibson, based on his work. Ever since Francisco's review, this film has been in the back of my mind, with the intent that I need to revisit it sometime very soon. Hey, Francisco liked it, and that carries a lot of weight in my book.

When I watch a film, I usually post a status update on Facebook, in the hopes of encouraging some good film conversation regarding said film as I'm watching it. It's a fun ploy I use to get people to talk films with me. With this particular film, it was pretty unanimous; they all stated that though they hadn't seen it in forever, they remember liking it. I on the other hand, had the complete opposite memory of this. I remember not liking it at all when I first saw it in theaters. I remember thinking that more than anything, I did not like the first time director's "vision", and that his lack of experience and creativity soured the experience for me because quite frankly, it was lame. Those were my initial thoughts on this way back in 1995 anyway.

Here's the thing. I started this review a few days ago, going on and on about little details that probably don't mean squat to a lot of you, and then I started to realize that it was becoming more and more apparent to me that I just don't care enough about it to go into that much of an effort to either talk smack or praise it for it's complimentary attributes. I'd much rather put my energy into reviews that were far more entertaining than this, which I will. But in the meantime, here's some quick thoughts on Johnny Mnemonic.

In a nutshell, it was just alright. Though it's got strong production value, a pretty stellar and random ensemble cast (Dolph Lundgren/Henry Rollins/Udo Kier/Takeshi Tikano!!), some cool neo noir/cyberpunk/futuristic/Asian-inspired production design, and an interesting premise, I just found it all rather dull. It's essentially just one long chase sequence, except nothing interesting ever really happens. The sparse action is forgetful and uninspired, and Keanu Reeves, looking bulky after starring in Speed the year before in the beginning of this film and then drastically getting rail thin through it's course, is as wooden as he's ever been. Not that he's ever been the greatest actor, but still.

New York based artist and first time director Robert Longo infuses the film with such a dull palate, it's hard to be stimulated even with the bland visuals, because everything about the look and camerawork is on a sub-par level, like something you'd see in any random *DTV low-budget sci-fi film. As much as I found the film to be just okay, if it had at least been visually stunning or impressive, then that would have been something to get me through the experience a lot easier. But it's overall unimpressive amateur aesthetic really bothered me. Being an artist, I assumed Longo would be a shoe-in for film work, as others have successfully made the transition, like Joseph Kosinski (TRON: Legacy, Oblivion), but I guess being able to make that jump is not always natural for some artists. Johnny Mnemonic was his one and only film as a director, and its no real surprise.

I know I base a lot of what I like about a film on the visual impact, but that's really important to me. I'm sure a lot of fellow filmgeeks don't put as much stock into camerawork/angles/shots, but as an artist myself, those things make a world of difference to me. I know a lot of films aren't always going to be written great, or cleverly, but if it has some cool visual eye candy, well then at least that's something. So when I see a film that could be so much better simply by putting more effort into the visual aesthetic, it's just frustrating to me, especially with a film and premise like this, where it should have been slam-dunk.

Hope this doesn't turn a lot of you off! It wasn't a bad film, but it was just a little on the dull side and they really should have put this in the hands of a more experienced filmmaker. It's interesting, whenever I ask someone about Johnny Mnemonic and whether they liked it, they almost all say they did like it, but can't remember why because it had been so long since they'd seen it. It raises the question, "Maybe we feel that we're supposed to like it because it's got so many great ingredients?" Good ingredients, yes. But clearly, they weren't mixed together very well. Looking back on it, nothing about it seems groundbreaking the way it somehow should. I will file this under "missed opportunity".

* Direct-to-video
Posted by robotGEEK at 7:00 AM