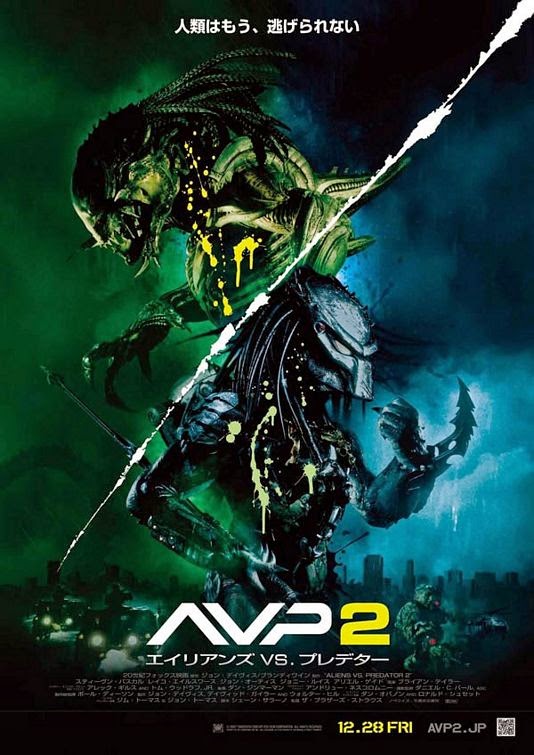 Of all the films I've seen these past few weeks, none surprised me more than this film did. You see, I never had any desire to see this....ever. After Paul W.S. Anderson's bland hackneyed PG-13 rated AVP: Aliens vs. Predator fiasco back in 2004, it pretty much killed any hope I had for seeing a badass Aliens vs. Predator film. So when this sequel came out 3 years later in 2007, I avoided it like the plague. I don't think I ever even saw a trailer for it, because as far as I was concerned, if Fox was going to put this property in the hands of the hack who gave us the Resident Evil films and Mortal Kombat, then I was just done with them. I did ultimately see the first AVP film, despite my objections, which was just as awful as I was expecting it to be, and so I had no interest in subjecting myself to another round of mediocre sci-fi/action/horror at the hands of two brothers I'd never heard of before. So why did I end up watching this the other night? I wish I had an answer, but I don't. As I browsed my local Blockbuster, something just said "Aw just rent the damn thing!", and so I did.

Let's get one thing straight. AVP: Requiem is a bad film, no doubt about it. In no way, shape or form does this, or it's predecessor represent anything we envisioned when the first Aliens vs. Predator comics started popping up in the 90's. No, no, no; not at all. What we get instead is a truly bizarre and twisted AVP film, one that goes so far out to left field that you have to wonder how the hell this ever got the green light. But you know what? This was awesome on a level that you're not expecting and I fucking loved it.

Before you lose your shit, hear me out. I already knew this was going to be bad on some level. I mean, come on. Nobody ever talks about this film right? No, they don't. Nobody ever really mentions the original AVP film either, but they sure as hell make more of an effort to not mention this one. Yet going in I thought, or hoped, that it had some kind of redeeming quality. Like, maybe the movie itself was bad, but maybe it would be all-out gory as hell and it would somehow make it worth the experience. You know, something like that.

The story was all kind of nuts that it may be hard to try and give somewhat of a summary, but I'll try. An Alien infects a Predator on a Predator ship. When the Alien inside the Predator comes out, it's created a new Alien/Predator hybrid. The Aliens have commandeered a Predator ship and it crashed on Earth in some backwoods Virginia town. The Aliens soon start wrecking havoc and impregnating people left and right and creating more and more Aliens. One Predator takes it upon himself to seek revenge against the Aliens for killing one of his friends, so he also lands on Earth in pursuit of the Aliens to try and kill them off one by one, along with anybody armed with a gun in the process. In the meantime, we are introduced to a random group of individuals all with their own unique backstory, who must end up working together to survive their town being overrun with Aliens in the hopes that the Army will come and rescue them. Meanwhile, this new Alien/Predatory hybrid is creating more and more Aliens by impregnating as many individuals as possible. You see, unlike the face-huggers, this hybrid can shove a whole bunch of Alien eggs down your throat, so that when they're ready to pop, it's not just one, but a whole handful of them. Will the Predator warrior come face to face with this new monster hybrid in time to prevent this small backwoods town from becoming a new Alien home?

People. You have to understand something. This is pure B-Movie gold here plain and simple. And if you go in thinking this beforehand, you'll have a helluva good time with it, like I did. I'll admit, I was hoping for more of a mainstream sci-fi/action film, but when it became painfully clear that the quality of this wasn't even up to par with the first AVP, then I just kind of rolled with it and I have to tell you, I had a blast because it's utterly and completely ridiculous, yet maintains a constant kitschy charm. I really don't know how else to explain it. Thematically, this film went all over the place. The beginning takes place on a ship in space, then the movie moves to a small town in everyday America, and the woods surrounding it. At times it feels like they're trying to tell us an honest to goodness story by forcing us to care for these individuals - the bullied teen, the returning army vet who's daughter doesn't pay attention to her, the mysterious older brother with a criminal past that has a heart of gold, yadda, yadda, yadda - but then moves into slasher film territory, then an end-of-days scenario, then the army gets involved and it's a big loud action film, complete with helicopters, tanks, jets and whatnot. This film is all over the place and doesn't know what genre it's trying to be, but I loved it because it was silly, ridiculous fun.

The Brothers Strause (Colin and Greg) are visual effects guru's who have been working in the industry as visual effects supervisors since 1996 with films like The Avengers, Titanic, Galaxy Quest, The X Files and Constantine under their belts. AVP: Requiem would be there first film as directors, before going at it again 3 years later with Skyline, another universally bashed sci-fi film that I actually quite enjoy. It seems that these brothers operate on a different level than most. Whether intentional or not, their two films retain a constant B-Movie vibe and quality that you just don't see in films anymore. Director Jonathan Mostow did the same thing with Terminator 3: Rise of the Machines. It could very well be accidental, or the guys know exactly what they're doing, but the fact of the matter is, whether it's the somewhat low-grade CGI effects, or the cheesy storylines, or the flat-out ridiculous nature of the films themselves, they're top quality fun guys. But I think what surprised me the most was that these guys can introduce some nice visual camerawork in the middle of all of this mess. Seriously, I'm as surprised as you are. They don't submit to the Michael Bay school of filmmaking, and thank the heavens for that, because from beginning to end, AVP: Requiem held a lush visual tone that I actually found rather impressive. Don't judge me!

Now, of the few blurbs I did hear about this, it was mostly that it was gorier than any of the other films. I watched the unrated version, and I don't think I can agree with that. Yes, it was gory, but not nearly as much as I was expecting, and while a few scenes came off rather shocking, like a little kid having a chest-burster exploding out of him, it never really comes across as anything worse than say Alien: Resurrection. Okay, maybe a little more violent than the 3 Predator films to date, but still. With the overuse of CGI, I kind of half-expected a little more gore.

Definitely not the kind of film I was expecting, yet on a whole other level, a badass low-grade high-budget B-Movie of the best kind. Senseless, ridiculous, violent, bloody, and quite bizarre. Thank you Colin and Greg Strause for making one of the funnest big-budget/low-budget horror/sci-fi/action direct-to-video quality films that made it to the theaters I've seen in years. And thank you for not using shaky-cam. No, seriously.
Posted by robotGEEK at 9:28 AM