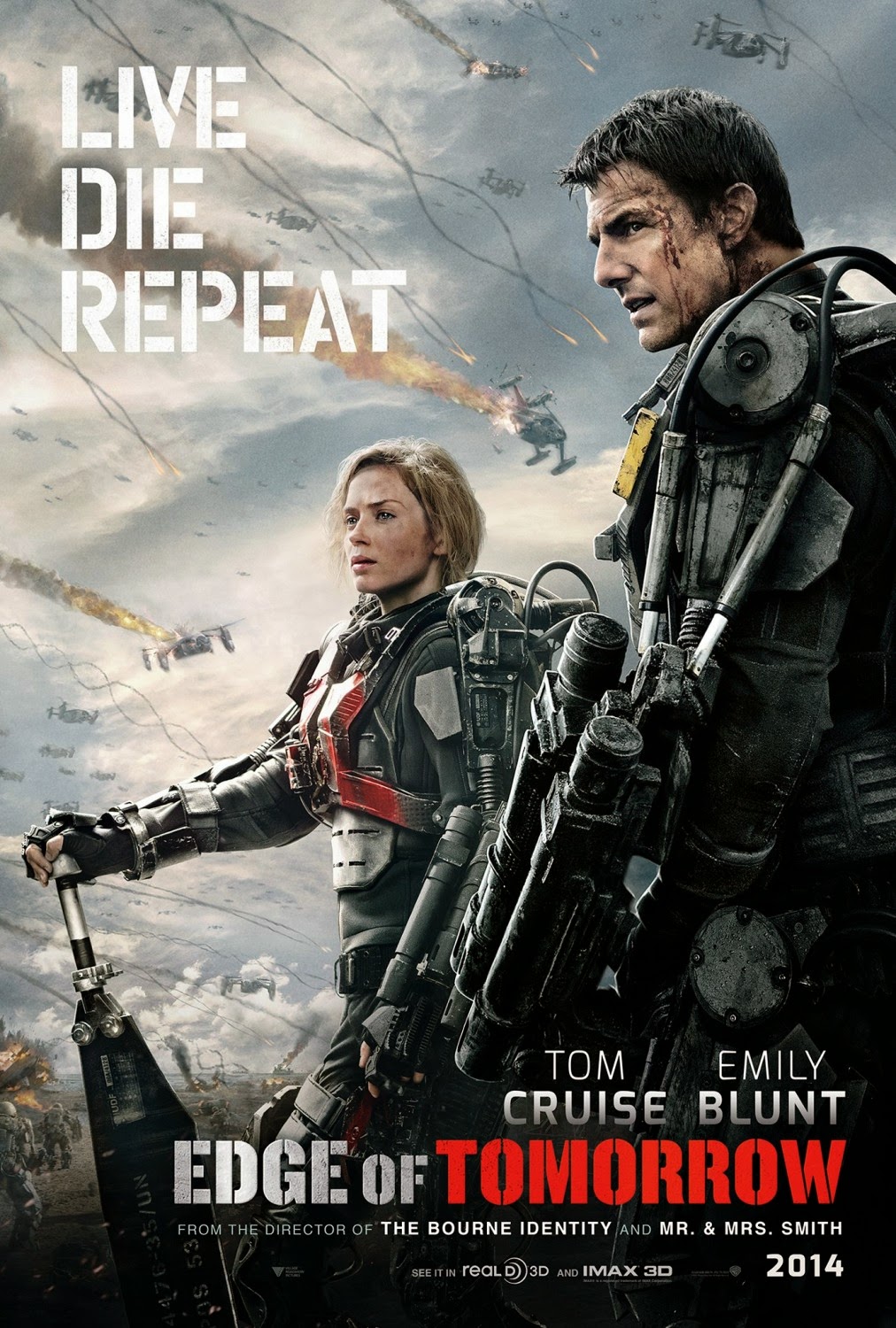 What do you get when the studio that is supposed to be behind it's film 100% - in this case Warner Brothers - drops the ball repeatedly making mistake after mistake in it's gloriously inept marketing strategies to the point that one of the best reviewed films of the summer becomes a box office bomb? The answer; Edge of Tomorrow.

Edge of Tomorrow is one of those Tom Cruise vehicles that came and went without a whimper literally just a few weeks ago....the kind of film Cruise seems tailor made for and undoubtedly a sure bet as his next big hit. Touted as the next big summer sci-fi blockbuster under it's original title All You Need is Kill (before WB got scared and absurdly changed it to the lame Edge of Tomorrow), it received glowing previews and reviews and currently holds a 90% fresh rating on Rotten Tomatoes. If you're not familiar with their rating system, let me assure, rarely does a film get a rating that high and when it does, it's wholeheartedly deserving of it.

IMDB's current 8.1 positive rating along with Rotten Tomatoes 90% fresh rating and Metacritic's 70% critic score/8.4 user rating ain't no lie. Edge of Tomorrow is a smart, engaging sci-fi thriller that is just about the best example of the type of big-budget sci-fi film theaters have been bereft of for a long time; let's just forget all this Transformers garbage for a minute. Not only that, it's also got some dark humor. Whaaat? Seriously, it's true. Since the trailers never hint at that because the studio is trying to sell you a big loud sci-fi picture, which it also is, the fact that you're not even aware of it's intense entertainment value as a top of the line sci-fi/thriller/action film that's also darkly funny, is a testament to Warner Brothers lack of good sense in their marketing department and should be ashamed of themselves. But I think it all begins with that ridiculous, sub-par and generic title change.

Based off of the original Japanese military/science fiction novel All You Need is Kill, Edge of Tomorrow is a great sci-fi film. It's smart. It's engaging. It's action-packed. It's clever and from time to time, even funny. Centering around a time-loop premise and the takeover of the planet Earth by a race of aliens, on a technical level, it's quite an ambitious film for everyone involved, most importantly director Doug Liman, who's career has seen him jump from genre to genre. While I've never really been that big a fan of his kinetic freestyle approach to directing, he is able to tame it down from time to time, like with Mr. & Mrs. Smith and Jumper for example. He's also done that here, and it's refreshing. Arguably his biggest film to date, it's aesthetically a daring one also. Maybe even his most visually impressive? Mixing some of his hand-held style with some really great steady camera work evenly, the enormous amount of CGI work here never falls into Michael Bay territory (Hallelujah!). Better yet, the action/battle scenes, of which there are a plethora, are damn impressive and most importantly, you can see what the hell's going on at all times.

Every aspect of the design of this film is stellar, with the robot attack suits being particularly kick ass. While I've been a huge opponent of any alien design in the last 10 years or so, though the designs of them here are somewhat similar (kind of shapeless with lots of arms and/or tentacles), they come off as way more organic and bottom line, more interesting and menacing. Are you with me on that? It's like every artist of an alien or monster from any film in the last decade follows the same rule of thumb in designing these things, and it's annoying. "Hey, let's make them look like huge insects with lots of arms/appendages that makes it difficult to make out what they look like or what they're doing!". Cut it out guys.

Cruise, to his credit, again delivers the goods. Though his star power is nowhere near the strength it was during all of the 90's into the early 2000's, he's still a huge box office commodity, especially overseas. You know, a lot has been said about Cruise and his personal life, all beginning with his Oprah stunt. Yea it was weird, and his stance on everything regarding Scientology and his personal views on....well everything else come off as......odd, but who cares? A lot of people shit all over the guy, but I've always found Cruise to be one of the most consistent and hardest working actors out there, and I continue to be a big proponent of this dudes talent. He's a badass; charismatic, likable, and not nearly enough A-List stars can possess all three of these qualities. Dwayne Johnson definitely. But who else?

It's a shame this hasn't done too well at the box office. If any film out there deserves to, it's Edge of Tomorrow. Maybe if the studio had kept it's original and more awesome title All You Need is Kill, it would have performed better? I personally think so. It sounds more on target. I'm sure when international ticket sales and then DVD/Blu ray and rentals are factored in, it may break even or even make a slight profit in the end, but it deserved much more than it got initially. But WB's marketing, or lack thereof, absurdness is confusing as all hell because it's painfully obvious they either didn't know what the hell they were doing or were so thrown off by focus groups uncanny ability to "not get it". Seriously, from what I understand, when it hits the home video market in the next few weeks, it will again have another title change to Live Die Repeat, which is somewhat better than the bland Edge of Tomorrow. But who knows? It may change yet again when it's all said and done.

Whatever the new title may be, do yourself a favor and check this out. It's a rock-solid science fiction thriller with an overabundance of charm and entertainment value and surely one of the best you'll see in a while. One of the best reviewed films of the summer is just begging to be seen.
Posted by robotGEEK at 2:58 PM