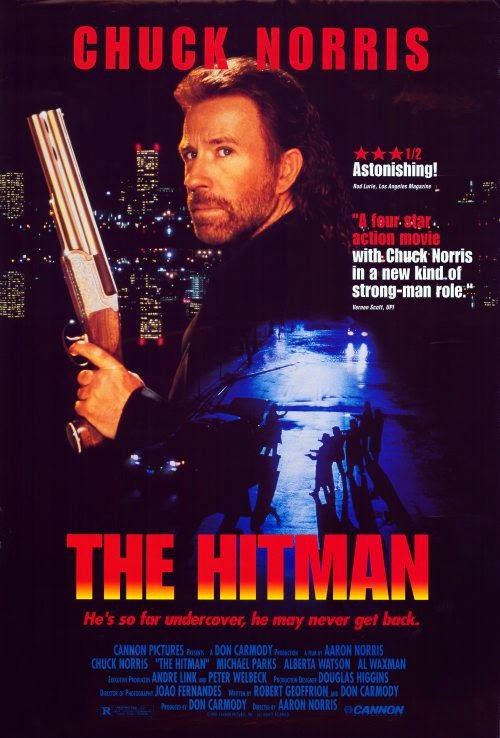 With any action movie star, there comes a point in their careers when they hit their peak, and then systematically fall hard into DTV territory. It happens to everyone; Van Damme, Seagal, Lundgren, and of course Chuck Norris. Hell, even Stallone's films (Anybody remember Avenging Angelo or Eye See You?) were hitting the DTV market on a regular basis before he single-handedly revived his own career with both Rocky Balboa and Rambo. I think so far the only one who hasn't fallen that low is Schwarzenegger, though none of his recent films can really be called quality, can they.

I don't know about you, but I can't recall a good Norris film from the 90's and beyond. It just seems that though most of his 80's output wouldn't exactly be called high art, they retained a certain kitschy charm and enough talent behind the camera that made them passable and awesome action films; films worthy of theatrical release, like the totally absurd, ridiculous and fun as hell Invasion USA. But as with any aging action star, they hit that peak and quickly fade into a DTV graveyard.

The Hitman is one of Chuck Norris's early 90's efforts, and the third collaboration with his brother Aaron as director up to this point. I can't quite remember if this made it to theaters or not, but one thing I can tell you is that of all the forgettable stuff he put out after 1986's The Delta Force, this is one of the better ones. You see, during this time, his brother Aaron Norris directed seven of his movies altogether, along with a bunch of episodes of Walker, Texas Ranger. Now me personally, I don't think he's a very good director, and I think that is a big reason why so many of his films from the last 25 years are about as average as can possibly be. Nothing about his directing abilities scream style or substance. I think if you had to categorize Aaron Norris the director, I'd call him "safe". He gets the job done and that's about it. You could never say that a film looks like an Aaron Norris film, because his particular brand of filmmaking offers nothing in the way of style. Why Chuck left the directing reigns to his brother so many times is beyond me. Personally, I think his films and his success suffered because of it. Sure, despite this and his waning popularity, a few managed to sneak into theaters like Firewalker, Sidekicks and Hero and the Terror, but surely nothing as memorable as his 80's output.

After being double-crossed by his partner and presumed dead, undercover officer Cliff Garrett turns up two years later as a mafia hitman with a new identity. When a new mob moves into town, Grogan (Chuck Norris) must try to turn them all against each other in the hopes of bringing them all down.

The thing that surprised me the most is that while I wasn't really expecting much to begin with, The Hitman is actually quite decent. Nothing to brag about, but it's a competent film and while a lot of it is absurd and sometimes laughable, it's straight-forward and dead-serious approach to the material and it's execution gives it that higher caliber B-Movie quality. And though you don't believe a word of.....anything, everyone is playing it with a straight face and well you know, it definitely adds something to the finished product. Like for example, we're expected to believe that Chuck Norris can easily schmooze his way into the Italian mob within a span of 2 years. Okay. And let's talk about this guy's look. That ridiculous mullet that gives Van Damme's Hard Target mullet a run for it's money. His oversized designer clothes. That oversized black trench coat. I mean, he just looks so silly, and all these things only make him look smaller than he already is. But you know what? His conviction is priceless and that's what sells it.

There are really only 2 things in this film that could have seriously killed it, the first being the inclusion of a kid into the storyline. You know, the kid next door who gets bullied and so the hitman feels sorry for him and takes him under his wing as sort of a father figure and then the bad guys use the kid to get back at the hitman and when they hurt him, he gets all pissed off and goes after them? Yea, they pull one of those, and it's cliche like a motherfucker. The second being that no matter how you look at it, Chuck Norris is just so horribly miscast in this. He looks utterly ridiculous and you can't help but wonder if this was initially intended for someone more suited for the part, like say Steven Seagal. In any case, thankfully for me these two issues didn't necessarily ruin the vibe.

I don't want to beat up too much on Aaron Norris, because I have to admit, The Hitman was pretty cool. It feels like he really tried harder than usual to give this film some style, and you know, he half-succeeds in that department. While easily a forgettable film, you can tell that everyone involved is really trying hard to pull off a good action film, starting with Aaron Norris, by no means a stylish director. But he does a pretty decent job here and if you're looking for a straight 90's piece of action nostalgia, for my money you can't go wrong with this.........if you can get past Chuck Norris looking ridiculous as all hell. You won't find wall to wall action or anything, but you will see some cool shots of Norris walking around in slow-mo in a big bulky black trench-coat and a serious mullet, and sometimes, that's just enough.
Posted by robotGEEK at 9:28 AM