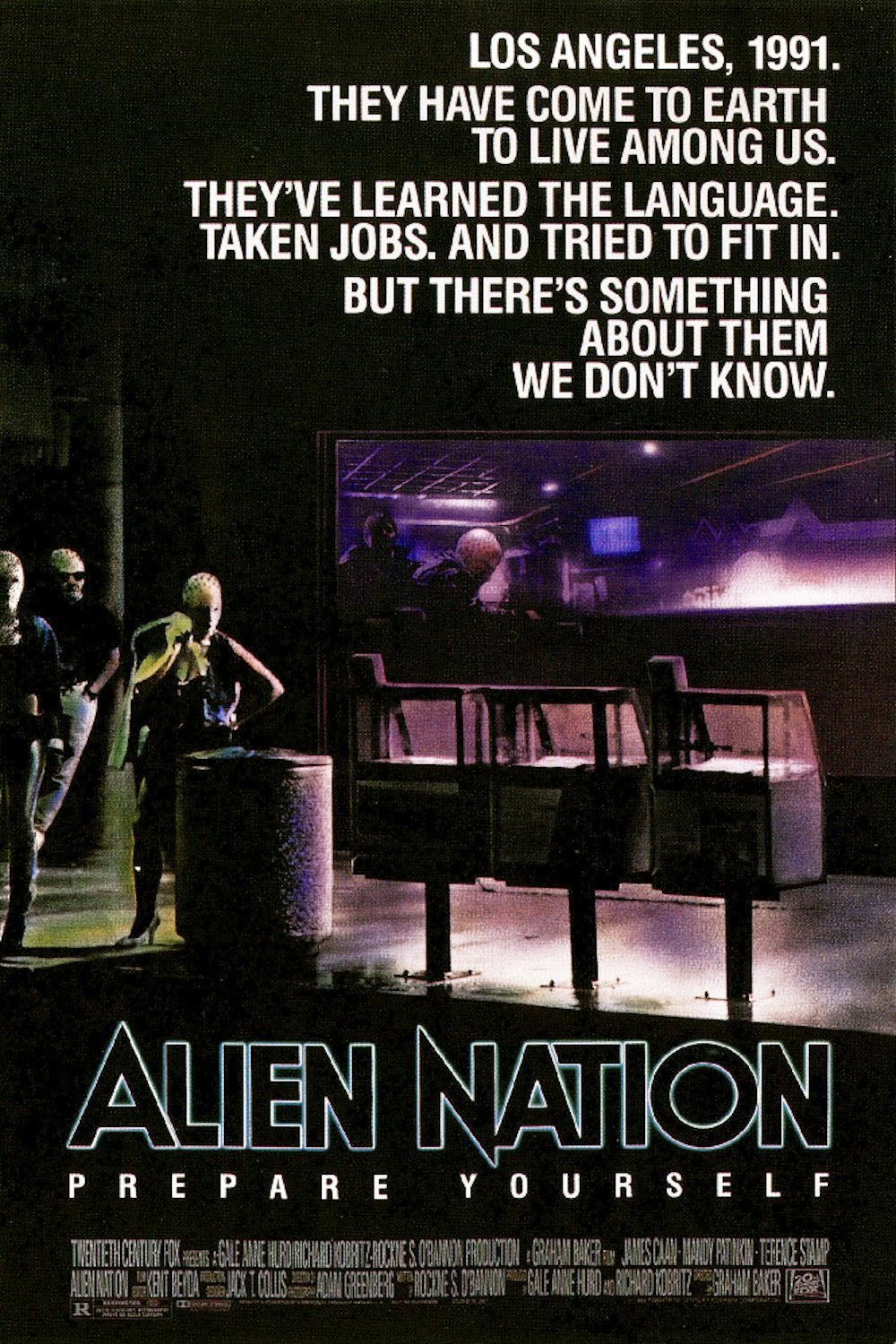 It's hard to believe that this is the very first time watching this film. I know, I know. You'd think that this would be right up my alley, and you'd be correct in thinking that. Honestly, I don't really know why I never got around to it. Maybe because I never heard anybody say anything about it. Or for whatever reason, it just kind of flew under my radar. To drive this point even further, I had no idea that there was even a television show based on this. Where the hell was I?

As I was browsing a friends DVD collection recently looking for something to borrow, I came upon this and realized that I'd never actually seen it before. I'd heard of it, sure, but like I said, I just never got around to checking it out. Immediately I'm excited because it's got 3 things going for it to where I'm basically sold on the idea. It's got action, it's got some sci-fi, and it's from the 80's. Need I say more? I'd never heard of the director before, but it's produced by mega-blockbuster producer Gale Anne Hurd (Aliens, The Terminator, The Walking Dead, and countless others) and stars James Caan and Mandy Patinkin as two mismatched detectives from different worlds. So yea, it sounds badass and right up my alley. Did it deliver? Let's find out.

In the near future, a race of aliens known as newcomers have descended on Earth, slowly integrating into society. When Detective Sykes (Caan) loses his partner to one of these newcomers in a robbery, he teams up with the departments first newcomer detective, Detective Francisco (Patinkin) to solve the murder and catch who killed his partner. They soon uncover a plot that will reveal a lethal drug from the newcomers home planet is hitting the streets by the hands of one of their most respected citizens. A drug so lethal and addicting that it will change everything.

Alien Nation starts off strong. The film is oozing with a strong 80's/90's aesthetic and the direction by Graham Baker is tight. Instead of introducing us to this alien race, known as "newcomers", landing on Earth and integrating themselves into our society in what could have amounted to at least the first act of the films entirety, we are smartly given a short monologue that explains everything and we are then flung into the film, literally minutes away from the first action set piece, and a beauty of one at that. It's with this action sequence, the liquor store robbery where Det. Sykes's partner is murdered, that got me excited because it's a stylishly executed one and a reminder of a way of making action films that they just don't do anymore. And for most of the films short running time, it succeeds as an excellent example of old school action filmmaking at it's finest. However, it clearly begins to drag somewhere in the middle when it becomes more and more apparent that the action has taken a back seat for character development and the film's subplot regarding the drug Jabroka. It's at this point where the film feels more like a detective thriller than a sci-fi actioner or an action cop/buddy movie, which is how the film was falsely marketed in my opinion. Don't get me wrong, I'm all for more character development. In fact, we need character development so we can actually give a shit about the characters (duh!), and it always makes for a better film. It's just that as much as I loved the interplay between the two mismatched detectives, unfortunately it slowed the film down in this case. What it ended up feeling like was an episode of a sci-fi television series, which isn't surprising I suppose when the films writer is a creator/writer of several popular sci-fi television series like Defiance, Farscape, Revolution and SeaQuest 2032. When I discovered this, it all made sense.

When the film reaches it's third and final act, things begin to pick up considerably, but it never goes as far as you hope it will. There's an explosion, a chase, a showdown between the two detectives and a drugged up and unstoppable villain; all very exciting on paper. But it all seems rather tame, like there should be more of everything to finish the film. As I was watching this, and enjoying it I should add, another film came to mind, a film that I love to death that was able to take some of these same elements and do it right. That film is Dark Angel aka I Come in Peace. While not immediately apparent, both films share a lot of similarities; aliens coming to Earth dealing in drugs, two mismatched cops, late 80's/early 90's aesthetic, action and sci-fi elements. But Dark Angel was able to do it better because while it still managed to tell the story it needed to and interconnect the storylines of the two (Dolph Lundgren, Brian Benben) being forced to work together and the entertaining interplay between them while simultaneously tracking down an alien who's killing people for a drug found only in the brain, they throw in enough brainless and over the top action to keep the die hard action fans satisfied. With Alien Nation, while marketed as a sci-fi/action hybrid, it lacks a little too much in both departments to really refer to it as one or the other. In this regard, it actually feels more like a detective-chasing-down-a-drug-dealer style thriller than anything else. Like it's their attempt to update a tired formula by inserting a race of aliens into the story. But you know, that could very well have been on purpose for all I know. Maybe that was the whole point, or maybe budget constraints limited what they could do?

As it stands, it's entertaining if you're in the mood for a late 80's cop/buddy/action/sci-fi/detective film. I feel like I should state again that I did indeed enjoy this film to a certain degree. It's cleverly written in some parts with some amusing and sometimes funny dialogue, and the action, when on display briefly, is well done. And despite being made a good 26 years ago, it's not overly dated by any means the way other films are around this time. You just can't help but feel that overall, it could have been so much better, mainly in trying to figure out what type of film it wants to be. With all that the film gets right, i.e. the casting, effects work, subject matter, strong visual punch, it always feels like it's missing something. I've since read that it was severely shortened in post, and clocking in at an hour and a half, it certainly feels that way. There are scenes and sequences that feel like they were intended to be longer. For example, certain shots that were shown in the trailer are not in the final film. The character of Strader (a severely underused Jeff Kober) is mentioned often in the film, but only appears for a total of a minute. And it's Jeff Kober! Since when is cult character actor Jeff Kober only given a minute of screen time, even under heavy makeup? Though the film picks up later, even the climactic confrontation at the end feels underwhelming compared to the rest of the film.

Despite my complaints, it's a solid film and a solid effort. It's strong production value goes a long way and while a little underwhelming and dull in the second half, it's got enough to like about it overall that I think lends it enough credit in the genre it's trying to fall under. I'm still not quite sure which one that is though.  When the film closes, they throw in one of those "Hey, despite our differences, we can still be friends. In fact, let's stay partners, even though I'm a bigot and can't stand you. Better yet, why don't you join me in my daughters wedding?" moments and it's quite hilarious. It's one of those scenes that they often included in action films back in the day as kind of an afterthought. Like one of those freeze-frame moments. Even Dark Angel has one!

Final thoughts; Alien Nation is a good film, just not a great one.
Posted by robotGEEK at 2:58 PM