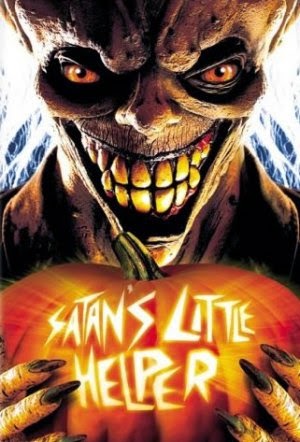 From time to time, you come across a film that you know is going to be of low quality. Sometimes it's in the title, or the cover art, or just in the fact that there's not a single name in the cast or crew that you recognize. Shit, sometimes it's all of the above, as is the case with this film. With Satan's Little Helper however, let's face it, it's got some cool cover art. You're intrigued, right? Only problem is that the misleading cover art is the only thing this terrible little bland excuse for a horror film has going for it. It's also not an accurate representation of what the character actually looks like in the film.

I'll be honest, I had high hopes for this one. Sure it's a ridiculous concept, but a lot of fun can be had if it's done creatively. Such was the case with the totally unexpected surprise Stitches. If you're committed to the fact that it's a ridiculous premise and utilize that to your full advantage, you can have a lot of fun; there are a plethora of ways to use that gimmick and just run with it. And if you have some actual talent behind the camera, well that always helps. Again, Stitches is a testament to that concept. Does Satan's Little Helper fall into the same category?

Heeeeeell no! I'm not sure how the hell I came upon this title, because I know I did recently on some list of horror films. When I saw it pop up streaming on Netflix recently, I jumped on it. I can only assume I heard about it from a list of underrated Halloween themed horror films? But there's just no way that this could end up on anybody's list of any type, unless it was a list of garbage because this film was so bad on so many levels. And you know, I love bad films too. I don't discriminate. Sometimes they're so bad that they actually end up enjoyable. It happens more times than it probably should. But that's not what we have here. I think writer/director Jeff Lieberman intentionally set out to make a legitimate horror film, but you know, it's nothing short of a train-wreck. And not even a brilliant one. As we all know, train-wrecks are fun. Samurai Cop, The Visitor, Hard Ticket to Hawaii. Brilliant train-wrecks and I love the shit out of them. What we have here instead is a film that's so bad in literally every department, instead of basking in it's ineptness or lack of cleverness, all you end up feeling is annoyed.

A serial killer in a Halloween costume is going around murdering people on Halloween night. When a naive kid, who's obsessed with a video game called Satan's Little Helper, encounters this killer and mistakes him for the make-believe character of the video game, he thinks they're playing a game and unsuspectingly helps the killer in his killing spree.

Everything about this film is terrible, the look, the direction, the acting, the pacing, the set-up, the production. Yet, all those things can be forgiven if the film itself was at least enjoyable in certain areas, say for example with some awesome gore/effects work/kills. Nope. None of that here. That's a real shame too because if it had at least offered some decent practical or over the top makeup effects, then it might  have been passable. In fact, that was the only reason I even stuck it through to the end, in the hopes that maybe the last act would end in some sort of blood-bath that would maybe somehow make up for the rest of this lackluster effort. No such luck here. In fact, there was only 1 single kill that implored any type of actual makeup effects and it was nowhere near the level of quality we've come to expect these days, even from low-budget horror films.

I think this film will go down in history as one of the best examples of stupidity ever to grace the screen. Every action, reaction, and decision that every single character makes in this film is the absolute worst one. And if it's not a bad decision, then it's an incredibly STUPID decision. That's not even an exaggeration. You'll be floored by the amount of insanely inept decision-making these characters are able to muster up on a minute-by-minute basis. You even begin to wonder if this is on purpose. That maybe writer/director Jeff Lieberman thought he was being clever by throwing every single bit of horror cliche'd stupid decision making that's ever been done. Like maaaaybe it's a tongue-in-cheek wink to the audience. It's not. It's just bad writing and that all falls onto Lieberman's shoulders. Has he only ever seen bad horror films, because he certainly couldn't write a decent line of dialogue, or even anything that marginally resembles any logical thinking. Nothing is plausible. Stupidity is the only word I can think of in trying to describe the actions of every single character in this film. It's maddening! You literally scream and hurl obscenities at the television screen in frustration because there's really nothing else you can do.

Here's a minor examples. There's a scene where the family of the boy is in the house and the older sister of the boy keeps telling the mother that the guy in the weird costume is not her actual boyfriend like she had thought for like most of the film, even though she could easily have just made him take that stupid mask off, but nooooooooo, this film doesn't follow logic that way. So she keeps trying to tell her mother that it's not the boyfriend in the costume, who also tried to sexually assault her just a few minutes before, which she seems to have inexplicably forgotten about since she's not mad anymore, and they need to leave. But of course, the mother doesn't believe her. Then suddenly the killer appears from one of the rooms, stabs the father repeatedly, pulls out his intestines and ties them to a chair nearby. Why? I have no fucking idea. And the family is just standing there in shock, screaming. The killer calmly turns around and walks back into the room from which he came from. Still, the family does not run away. They just sit there crying. The sister eventually runs into the kitchen to call for help while she leaves the mother still sitting in the dining room in shock. Why wouldn't they just leave and get to safety to call for help? I'm glad you asked. That's a very good question. I don't know. I'm not one to lay labels down on people, because who am I to judge anyone? But I can only describe everyone in this as retarded. And while I know it's not exactly PC to say that, it's really the only word that comes to mind.

So of course when the sister comes back from attempting to call for help using the kitchen phone, her mother is gone. Surprised? All the while the incredibly stupid little brother keeps saying "I'm sorry! I thought it was a game!". For real, this kid is seriously stupid. He literally hand fed the killer multiple victims all the while somehow thinking it was all just a "game". The fuck??? So here the killer has killed the dad who hasn't been seen for the entire film and just suddenly appears for this brief scene, only to be killed immediately. And instead of taking her kids and running out of the house to safety, they all just stand there crying. And that whole bit with the intestines being pulled out of the dads body and tied to a chair? It sounds much more awesome than it actually is. And unfortunately, that's the one and only gory kill in the entire film.

This kid. A lot can be said about this kids incompetence at......well anything. Though I'm assuming he's supposed to be just an average and insanely naive 11 year old who's obsessed with a violent video game and then unsuspectingly helps a killer plan and execute multiple murders, he ultimately comes off more of a kid who must have some serious mental challenges because even at 11, no normal kid would be this stupid and gullible. He's just incredibly stupid and worst of all, weird. No sane average kid thinks or acts the way he does in the real world, or even in shitty low-budget horror films. I have an 11 year old son, and I can guarantee you that even he isn't this gullible or stupid. I'm not even going to bother getting into the weird relationship he has with his beautiful older sister, which I might add is what starts this whole murder spree to begin with. You see, when he comes across this killer actually placing a dead body on a porch, his first thought is "Hey, can you come kill my sisters new super nice boyfriend because I'm jealous for no reason?". Even though he thinks it's all a game (Huh?), it's moronic and the kid only gets worse and worse coming off as just dim-witted and overly unintelligent.......even by 11 year old's standards.

The thing with this film is that it's so hard to tell what kind of film Jeff Lieberman was trying to make. I think a horror film, but I can't be 100% certain, because the plot is so utterly ridiculous and the way these characters go about doing even the most mundane things and fucking it all up at every turn leads you to believe that maybe he knew how silly all this was and was just trying to have fun with it? Yet it's not fun, or funny, not even in a tongue-in-cheek kind of way. And if he did know how silly this all was, he's terrible at even executing that kind of film because it's all played straight and it just sucks in every way. Everything is terrible with not one single redeeming quality.

So as I mentioned before, I decided to tough it out and see it through to the end because maybe in some alternate universe that somehow broke through into ours, the ending might be kinda badass. If anything, I just wanted to also see who the heck the killer was because he's in costume for the entire film. No such luck. They leave you hanging and just like with the rest of the film, it's infuriating. I don't know if writer/director Jeff Lieberman thought he was being clever by doing this, but it's not. It's really just the icing on the cake in terms of how much this film can possibly piss you off. Not to mention they literally point out who the killer might actually be several times, but does Lieberman follow through with that? Of course not. That would be too easy.

It's no real surprise that this films writer and director has only worked on one other project after this. I can only say, "Hallelujah for that!". The only reason I would possibly recommend this to anybody is to bash the shit out of it with a group of friends for movie night over some drinks. In fact, now that I think about it, this would make a great addition to RiffTrax.

While your at it, please take a moment to check out Jenny's House of Horror's take on this film HERE. We are on the same page with this one.