Halloween 5: The Revenge of Michael Myers 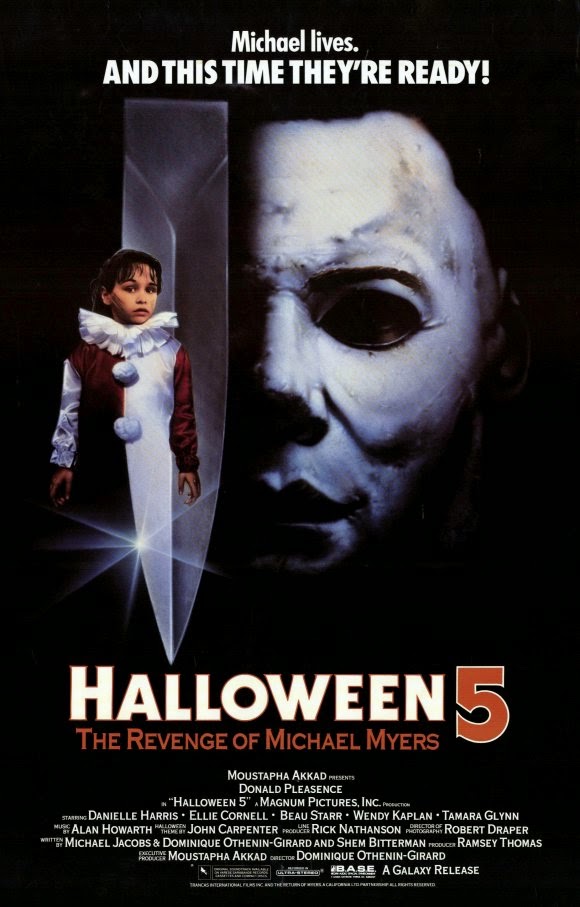 After the disastrous box office take of Halloween III, the franchise sat in limbo for 6 years before being revived in 1988 with Halloween 4, bringing the character of Michael Myers back into the series and going back to it's roots. When Part 4 was a surprise box office hit, spending two weeks at #1, producer Mustapha Akkad, seemingly drunk with success (his own words), rushed another sequel into production without a finished script so the next installment could premiere in October of 1989, a year after Part 4 was still in theaters. With french director Dominique Othenin-Girard at the helm, the result is a nonsensical mess, fueled by an amateur feel and a direct-to-video quality that makes it undoubtedly the worst and weakest Halloween film to date. But I haven't seen Part 6 yet, sooo.......

There is so much wrong with H5, so many plot holes and so many "what were they thinking?" moments that you often times wonder if it was written by a 15 year old. Remember at the end of Part 4 where Danielle Harris's character goes crazy and commits murder and so you're left thinking she will somehow be a killer like her uncle in the next film? Well they decided to bypass that whole idea and go a different direction, so the fact that she committed murder is never even mentioned. Furthermore, she's even on the poster art for this movie wearing the clown costume she wore in Part 4, yet never once wears that costume in the entire film.

When H4 ended, he was blown away by a hundred bullets and thrown down a shaft. Of course we think he's dead because I mean, who wouldn't die after something like that right? Michael Myers. That's who. He apparently crawls away down the shaft, down a river, and rescued by a nice homeless man who heals Michael back to health. He awakens a year later and picks up right where he left off, looking for his niece Jamie. You see, he and Jamie share a psychic connection. She knows when he's about to strike, and Loomis hopes to use this new found psychic connection between Jamie and her uncle to catch and trap Michael. How do these two share a psychic connection? I don't know. And neither do the writers or the director. You just have to play along with it.

H5 is filled with moments that make you wonder if the writers and inept director even knew what they were doing or had even seen a horror film before. For example, there's a scene where Dr. Loomis confronts a police officer in Michael's old abandoned house as they await a confrontation between Myers and his niece Jamie. Loomis pulls a gun on the officer and takes Jamie with him. Only the officer has a revolver in his hip holster and a rifle right next to him. Yet that thought never seemed to enter anyones mind as the officer just lets Loomis and Jamie go. There's another sequence where these two bumbling cops (complete with clown theme music) are sitting in a car outside of a barn for no reason where literally feet away Myers is killing a bunch of kids. First of all what were they doing there just sitting in the car outside the barn and second of all how could they not hear the endless screams of Myers victims? And thirdly, why the fucking clown theme music? There's another scene where Myers is driving a hot rod car through a field as he's chasing Jamie and anybody else near her. When did Myers get his license? Anyway, he crashes into a tree in what could easily be described as probably the worst filmed car crash sequence when the police show up and rescue Jamie. And then the police and ambulances immediately leave. Um, why didn't the cops secure the crime scene and look for the killer? Needless to say, these little details are unimportant to the filmmakers because it leaves open the opportunity for Loomis to immediately wander back into the field to talk to Myers because of course, he's also still hanging around too. This is only the tip of the iceberg though, because there are so many "amateur" plotholes and rookie mistakes that I'd go crazy trying to list them all.

SPOILERS:
One of the biggest "Huh?" aspects of the film is the inclusion of a stranger known as the man in black. He shows up randomly about 3 different times in the film briefly, seemingly to let you know that he will somehow play an integral part to the story. Dressed head to toe in black complete with a trench-coat, cowboy hat and silver tipped boots, they never show his face, only that he's arrived in town and is headed......somewhere. You actually forget about him because he's only shown for literally a few seconds at a time, as if he's just an afterthought of the writers, or director, or whoever the hell it was that created him. But then at the end of the film, when Myers has been caught and sits in a jail cell, he miraculously appears at the jail, an explosion occurs, a lot of gunfire, and you see that Myers has escaped once again. What the fuck?! And that's how the film ends. No explanation as to who this guy is, or how he knew Myers was in the jail, or how he was able to kill everyone inside, or why his sole purpose was to let Myers escape. And then the film ends and you  practically want to scream at the television. Add to that the frustratingly uninspired way that whole sequence was shot and you end up throwing your hands up in the air and yelling "I give up!". You see, instead of actually showing us any of this, all we get is a shot of the man in black walking towards the police station, cut to a blurry shot of a dark figure surrounded by smoke standing in a doorway (seemingly Michael's cell?) in slow motion shooting a gun all while the sounds of gunfire and explosions can be heard. That's it. Cut to Jamie wandering into the jail in the aftermath (because come on, what kid wouldn't walk right into a war zone right?) and seeing her uncles jail cell has been ripped open and Michael is gone. The end. What bullshit.

Donald Pleasence again returns as Dr. Loomis, only this time it seems he's only half invested in this crap. I suspect that maybe by this point he felt he could easily phone it in. Here's the thing, I respect Pleasence as an actor. He's been in a lot of films and has worked with some great directors in his time, but if you didn't know already that he was a well-respected actor who's done everything in every genre, you'd think this was this guy's first film. He's utterly terrible in this, as if he's never acted in a film before in his life. His delivery is cringe-inducing, and his half-assed portrayal of an aging doctor who seems to be the only one who clearly knows the lengths to which his former patience Michael Myers will go to will have you wondering why the hell he himself has never been locked up, as he's clearly not a sane person by any stretch of the imagination. How the hell he is never arrested, allowed to carry a gun, brandish it freely apparently, and go to great lengths to put many people in harms way without any thought to their safety just to catch Myers is beyond me. Speaking of Loomis and the ineptness of the director, there's a scene towards the end of the film where Dr. Loomis is physically fighting with Myers. After having dropped a chain trap on him and shooting him with about 10 tranquilizer darts, Myers still has enough fight left in him and he and Dr. Loomis are duking it out with Loomis lazily hitting Myers repeatedly with a 2 x 4. It's painfully apparent that it's not real wood and more likely plastic because Pleasence doesn't try in the slightest to give it any real effort, even then it looks like he's just swinging a piece of cardboard up and down. But then as Myers finally succumbs to the tranquilizers, Loomis apparently keels over and dies on top of Michael. Huh? At least, that's what it looks like in Girard's inept use of proper camera movement and framing, but nothing is ever mentioned of the doctor and he's never shown again after that, so you can only assume that Loomis has in fact died after succumbing to his injuries. Or maybe it was a heart attack. I don't know. You can't tell.

One of the things you'll notice immediately is that Myer's mask is different. I'm not going to get into the specifics, just to say it's noticeably different and not in a good way. Though I will have to give the film one positive point, and that's in the casting of Don Shanks as Myers. His large bulky frame is much better suited than stuntman George P. Wilbur's unfortunate casting as Myers in both Part 4 and Part 6. Too thin to look menacing, they would have to put football padding underneath his jumpsuit just to fill it out, and holy shit is it ever noticeable. And honestly, quite comical. So knowing that Wilbur will again be filling the role of Myers in the next installment that I go into, Part 6, has already dampened my enthusiasm. I've heard 6 is also terrible, but I honestly can''t imagine it being any worse than this poor excuse for a Halloween film.

I can't remember the last time I was so upset, let down and disappointed in a film the way Halloween 5 has affected me. True, I was never a big fan of the franchise in general - at least not until Rob Zombie ignited my passion for the character and the franchise with his two stellar slasher films Halloween and H2 - but for the love of all that is holy, if you're going to make a sequel to one of the most popular horror franchises in history, put some heart into it. Some actual talent would help too.

With the exception of Donald Pleasence, all the actors were great, especially Danielle Harris, who again knocks it out of the park. So there's no qualms in that department. I'm more frustrated with the lack of originality, creativity, and producer Mustapha Akkad and director Dominique Othenin-Girard more than anything. In an interview, director Othenin-Girard actually states that he was trying to go away from full on horror and was attempting to go with a thriller vibe. Also, action is clearly not his department, as any sequence involving a chase, a fight, a shootout, a crash, are terribly shot/edited/choreographed. How hard is it to set up a camera, point it at a tree, and show a car crash into it? Apparently, too hard for director/co-writer Dominique Othenin-Girard because that sequence is the perfect example as to why this guy is not a good director for material like this.

My frustrations with this film have exhausted me, so I'm going to finally quit while I'm ahead. Needless to say, a bad film altogether. It might have had some redeeming value had it been so ridiculous that it would fall under the "So Bad So Good" category, but no people, it's just bad all around. I haven't yet seen Part 6, which is next on my list. but I hear it doesn't fare any better. Stay tuned!
Posted by robotGEEK at 1:03 PM