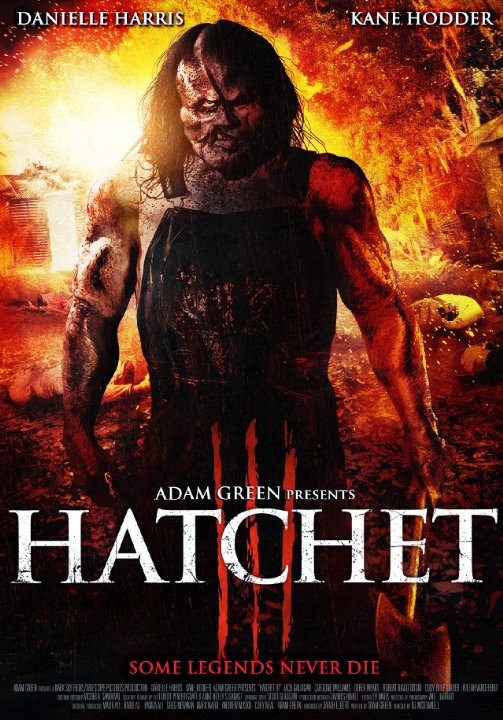 So now we've come full circle. In case you need a recap, here's a quick one. I only recently discovered Adam Green's wonderfully bloody homage to classic 80's slasher films trilogy known as the Hatchet films. I may even be one of the few horror fans who hasn't seen these yet, that is until now. Hatchet, the first film in the series blew me away by it's hugely spirited take on the genre, reminding us why we loved those types of films in the first place, especially if you are a 30 something who grew up a teenager in the 80's. Hatchet II, while a solid straight-up horror film, took a more serious approach, while still offering some insane over-the-top gore. While not as enjoyable as the first film, it was a very solid effort and still a much better horror film than most that come out these days. Which now brings us to Hatchet III.

Picking up minutes after the events of Hatchet II, Marybeth is arrested and blamed for the bloodbath that took place in the swamp. With the help of a local hack reporter, she soon uncovers the truth about Victor Crowley's curse and together, must try and come up with a way to stop Victor Crowley for good.

Right off the bat I'm going to tell ya that Hatchet III was a far superior film than Hatchet II. While it again doesn't possess the cleverness and tongue-in-cheek humor of the first film, it's a much stronger and better film because this time around, creator/writer/director Adam Green has handed over the directing duties to his longtime cameraman BJ McDonnell, and boy what a difference that makes. While I can certainly appreciate what Green has done with bringing this franchise to life and keeping it old-school, I've never considered him a strong visual director either. I think Hatchet II drove that point home for me. But by hiring his trusting camera operator to direct this time around is a blessing in disguise because it's apparent right from the opening frame that McDonnell has a strong visual eye and that we're in for a much more stylish take on Hatchet than the two previous films.

You're probably wondering how the fuck Victor Crowley can come back from the dead after watching what Marybeth did to the guy's head at the end of Hatchet II. Even I was curious. Well, apparently the Crowley curse is the reason he's able to recover rather quickly from certain death no matter how you kill him. I'm not entirely sure, but I don't think the whole "curse" thing was mentioned in the previous films. But it's a nice touch because as it allows him to regenerate every single day, he can return to doing what he does best, and that's killing Victor Crowley style! This curse is also the driving force behind the story this time around as Marybeth teams up with the reporter to try and put an end to it, thus ensuring that Crowley does in fact stay dead. 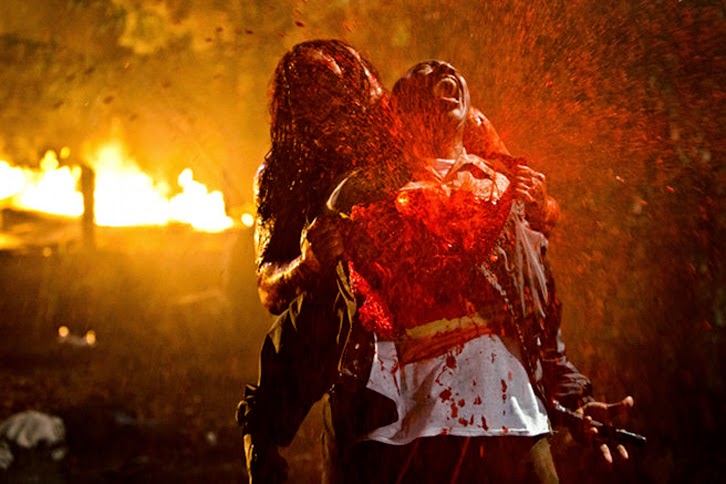 Much like with Hatchet II, this film again takes a more serious approach to the material, and you know, it works for me. Only this time around things move at a much more frantic pace, which keeps the film moving along rather nicely. I don't know about you, but I found the second film to be somewhat lacking in several departments, with it's pace being one of them. Scream queen Danielle Harris again returns in the role of Marybeth, much to my disdain, and somehow manages to comes off as a much bigger bitch than she was in the last film. It's true. And let me clarify, I like Danielle Harris as an actress. I think she's great. I think in the case of the Hatchet films though, it's just how her character is written and let me tell you, I can't make sense of a lot of her behavior in this entry. Like, I thought her whole purpose was to find her missing father and brother, but when she finally learns of their demise, it seems that she's just hellbent on being as difficult and uncooperative as possible from then on. It just doesn't make sense, because I would think that she would want some kind of revenge or what-have-you, but all she ends up really doing is being a pain in the ass for everyone and refusing to help in any way. But hey, that's just my opinion.

One of the things I love about Adam Green is that he infuses his films with a plethora of cameo's, as does Rob Zombie, and his casting is always genius, and this film is no exception. In this entry, we're introduced to quite a few new characters, all played by horror icons. First off, Zach Galligan (Gremlins 1 & 2) plays the local sheriff. Caroline Williams (Stretch from Texas Chainsaw Massacre 2) enters the picture as a reporter struggling with not being taken seriously, who thinks the legend of Victor Crowley is true and with the help of Marybeth, can finally get the story of her career. Sid Haig (The Devils Rejects) makes a small cameo as a racist bigot. And my personal favorite, Derek Mears (Friday the 13th-2009) plays the head of a swat team who leads the charge into the swamp for a search and recover effort until Victor Crowley decides otherwise. And then you have Danielle Harris returning to the role of Marybeth and of course, the one and only Kane Hodder as Victor Crowley.

While it was great seeing Zach Galligan on screen again, for me personally, the casting of Derek Mears can only be described as exhilarating for me. You see, if you don't already know, he played Jason Voorhees in the criminally underrated Friday the 13th reboot - a great old-fashioned slasher film if you ask me. And so here you have two Jason's in the same film, which only gets more awesome when they finally go toe-to-toe in a fight and much like the experience of watching Candyman and Victor Crowley/Jason fight in Hatchet II, it's a total geekasm, because as we all know, Kane Hodder is everyone's favorite Jason Voorhees. So here you have two titans who have both played Jason Voorhees battling it out and it's just fucking epic. Pure glee is the only way I can describe watching this and so thank you Adam Green. Thank you for understanding what it means to blow the minds of geek horror fanatics.

While the overall tones change from one film to the next, two things that do not change is Green's insistence on no CGI, and most importantly, insane, bloody, over-the-top kills. I still can't get over Reverend Zombie's (Tony Todd) death from Hatchet II! How insane and badass was that?! As we move into Hatchet III, one thing remains constant and that is that the gore content is pure. Let's be real for a second. How many films in a series can deliver the level of brutality for 3 straight films all relying on the most inventive, innovative kills ever to grace the screen, only to one-up themselves with each successive film? I can't think of any, can you? But these Hatchet films deliver on that promise wholeheartedly.

One thing you may have noticed in Hatchet II is that Victor Crowley's makeup looked different. Again in this film, the makeup department takes a different and slightly fresh approach to his look, making him bigger, bulkier and much more gruesome overall. It's a much more exaggerated take on the characters look compared to the first film, as if each film becomes more and more brutal, so does the look of Victor Crowley. While we're on the subject, Aunt Dolly's Garage again returns for makeup/special effects duties and again deliver a standout and amazing body of old-school practical effects work. 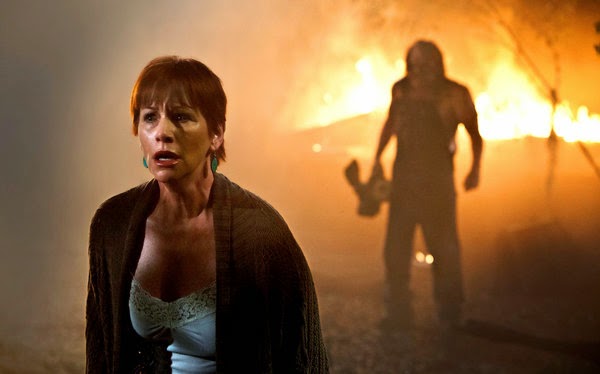 Aesthetically, Hatchet III is a much more visually streamlined looking film, and that is due to BJ McDonnell as director. I have to admit, I can't remember the last time I'd recently seen a better shot horror film. It's rather impressive and for me, that's what stands out more than anything. I think Hatchet creator Adam Green is a solid director in his own right, with the first film demonstrating his strongest skill at directing. When he returned for Hatchet II, it felt much more "anything goes", and while he never goes the shaky-cam route, he does shoot the entire film with a steadicam, so for someone who likes a little style with their substance, like myself, I wasn't really a fan of the visual tone of the second one. However, McDonnell seemed determined to end the trilogy on a high note, because from a technical and visual standpoint, Hatchet III is just awesome. Imploring much more streamlined and stylish camerawork, Hatchet III aesthetically blows the other films out of the water, there's just no denying that. Which is interesting considering director BJ McDonnell was originally the steadicam operator for the first two Hatchet films. So you kind of assume he's just going to do all steadicam stuff then because, well, that's his specialty. Apparently not. McDonnell did his homework, and despite reports that the production on this film was put under awful and intense conditions (at one time Hodder himself proclaiming it was the toughest job he'd ever done) having shot the film in an actual New Orleans swamp for the first time and not in California, it ultimately ends up being the most stylish of the bunch and the most aesthetically pleasing. Trust me, there are some pretty killer shots in this film. Combined with some impressive lighting and of course, more over-the-top kills and gore, Hatchet III is the perfect ending to an incredible trilogy

Posted by robotGEEK at 7:25 AM