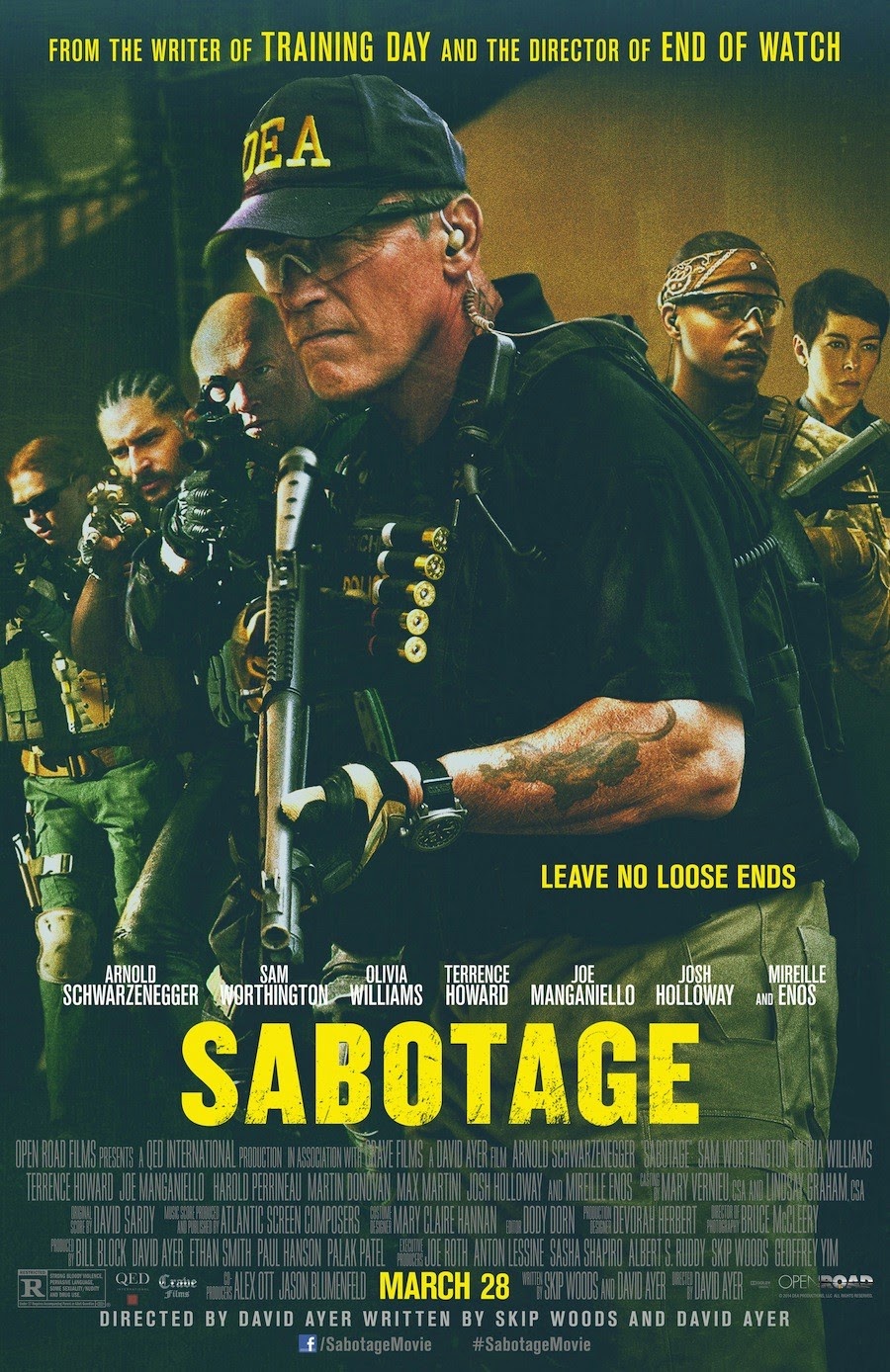 I am not a fan of David Ayer as a director. In fact, from a visual standpoint, I think he's terrible at it. While he's given us some good films as a screenwriter with such gritty fare like the first Fast and the Furious, U-571, Dark Blue, End of Watch, and helping Denzel Washington get that Oscar for Training Day, as a director, he hails from the "handheld shaky-cam freestyle" school of filmmaking and it's fucking annoying.

I wish I could say I enjoyed Sabotage, his most recent stint as both writer and director, but even with it's impressive and eclectic cast led by Schwarzenegger, it's mis-marketed attempt to sell you an "action" picture quickly becomes more and more apparent when you realize that this isn't really an action film at all. Yes, there's like 2 or 3 action sequences in the film, but not nearly what you're expecting. Not only that, it's a terribly shot film.

Breacher (Schwarzenegger) leads a large and eccentric DEA task force that seem to play by their own rules. When a job goes south, Breacher and his unit are framed and fingered for the jobs missing 10 million in cash. Soon members of his unit are turning up dead and everyone starts pointing fingers at each other. With the help of a detective (Olivia Williams), Breacher tries to uncover the conspiracy and who's killing off his team.

Here's the thing; it's a decent premise, I get it, and if you go in "not" expecting to see wall to wall action like the trailers lead you to believe, and if you can stomach it's documentary approach to filmmaking, you may enjoy it. Me personally, I found it a little on the dull side, save for the last 30 minutes. That last half hour is what I had assumed the entire picture was going to be like, so to have more of a whodunit thriller rather than a full blown action pic starring a larger than life Expendables type of unit, I was easily disappointed. And I'm guessing I'm not alone in feeling this way since the film was a pretty big bomb upon it's theatrical release.

It's a shame really. The large cast is really great in this, with Schwarzenegger again delivering a solid performance in an otherwise mediocre film, which has been his M.O. since he began his career resurgence beginning with last years The Last Stand. To date, while Arnold delivers the way he does best, the films themselves have all been a ho-hum affair, with this latest effort faring no better. And I think a lot of that has to do with writer/director David Ayer. There's no doubt that he's got some genuine talent as a screenwriter, having written some pretty gritty films in the last 14 years, but as a director, his documentary style approach to his two last films End of Watch and now Sabotage are maddening to the point of exhaustion. I just can't stress that enough. I know that was the whole point in End of Watch, but with Sabotage, it just comes off as lazy. Seriously fucking lazy. And not only that, there were times when it felt like I was watching the film through security cameras. So I'm assuming he went digital for this, yet it comes off as looking cheap.

I'm done bitching. Films like this are not bad, if you know what you're getting yourself into. Schwarzenegger is above this kind of film and material, and unless he's just not getting decent scripts in, he really needs to start being more picky with what he stars in. And while Ayer's seriously dropped the ball with his "let's move the camera around as much as possible to make you feel like you're in the scene" approach with this film, I have to admit his next effort, the war film Fury, looks killer and a huge stylish departure for him. Just based on the trailer alone, Fury looks like a stunningly shot and visually impressive film. Of course, that could simply be due to his cinematographer Roman Vasyanov. In either case, it looks like he may have redeemed himself with Fury. Let's hope so.
Posted by robotGEEK at 1:17 PM