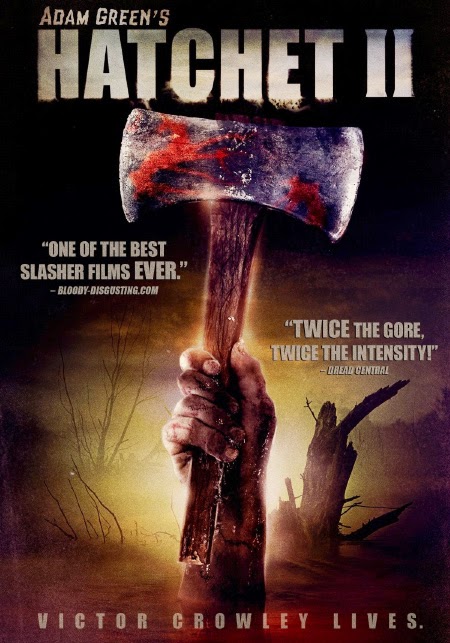 Recently discovering the Hatchet franchise has been one of the best film highlights in years for me. If you know anything about me, then you know my love for old school horror is huge. I grew up on the stuff, so even though I have just as big a crush on macho action movies and science fiction, horror will always be in my DNA. So to come across a series that prides itself on being a throwback to these 80's horror films that I grew up watching and love so much, well it makes me all giddy inside.

Adam Green's original Hatchet floored me. In a world of over-CGI'd crap, his insistence on CGI-less effects and gore was a breath of fresh air. His first film in the series was just the right amount of fun, scares, insane over the top kills and practical effects wizardry that made these films in their heyday so much fun. In 2010, he released his first sequel, again as writer and director. But this time around there have been some changes made.

Picking up minutes after the events of the first film, Marybeth implores the help of Reverend Zombie (Tony Todd) to lead an expedition back into the swamp to help find her missing father and brother. Reverend Zombie, however, has an agenda all his own, and it involves Victor Crowley (Kane Hodder).

Hatchet II is a drastically different type of horror film than the first one, and there are a lot of reasons for that. Almost immediately, you'll notice that this is more of a serious straight-forward approach compared to the fun vibe the first Hatchet had going. While a few funny bits sneak in here and there, this is a much more serious take on the material. Another thing you'll notice is the quality of the film. While the first Hatchet had more of a professional sheen and quality, this first sequel actually looks more of a low-budget affair than the original, which is odd since Will Barratt was the same Cinematographer on all 3 Hatchet films. That could very well be because of the camera's they used though, but I'm not entirely sure. But that doesn't reflect the practical effects work though, which is again top notch and the reason we watch these films in the first place. Tony Todd, who had a small cameo in the first film as Reverend Zombie, again returns as the questionable and sinister character, only this time he's front and center and hamming it up in glory fashion. The lead character of Marybeth has also been recast, with horror icon Danielle Harris now starring in the franchise as the heroine. And while special makeup effects master John Carl Buechler does return in the role of Jack Cracker, and a much bigger part I might add, he's not doing the effects work this time around. That task fell to the folks over at Aunt Dolly's Garage. And you know what? Buechler is not a bad actor at all. 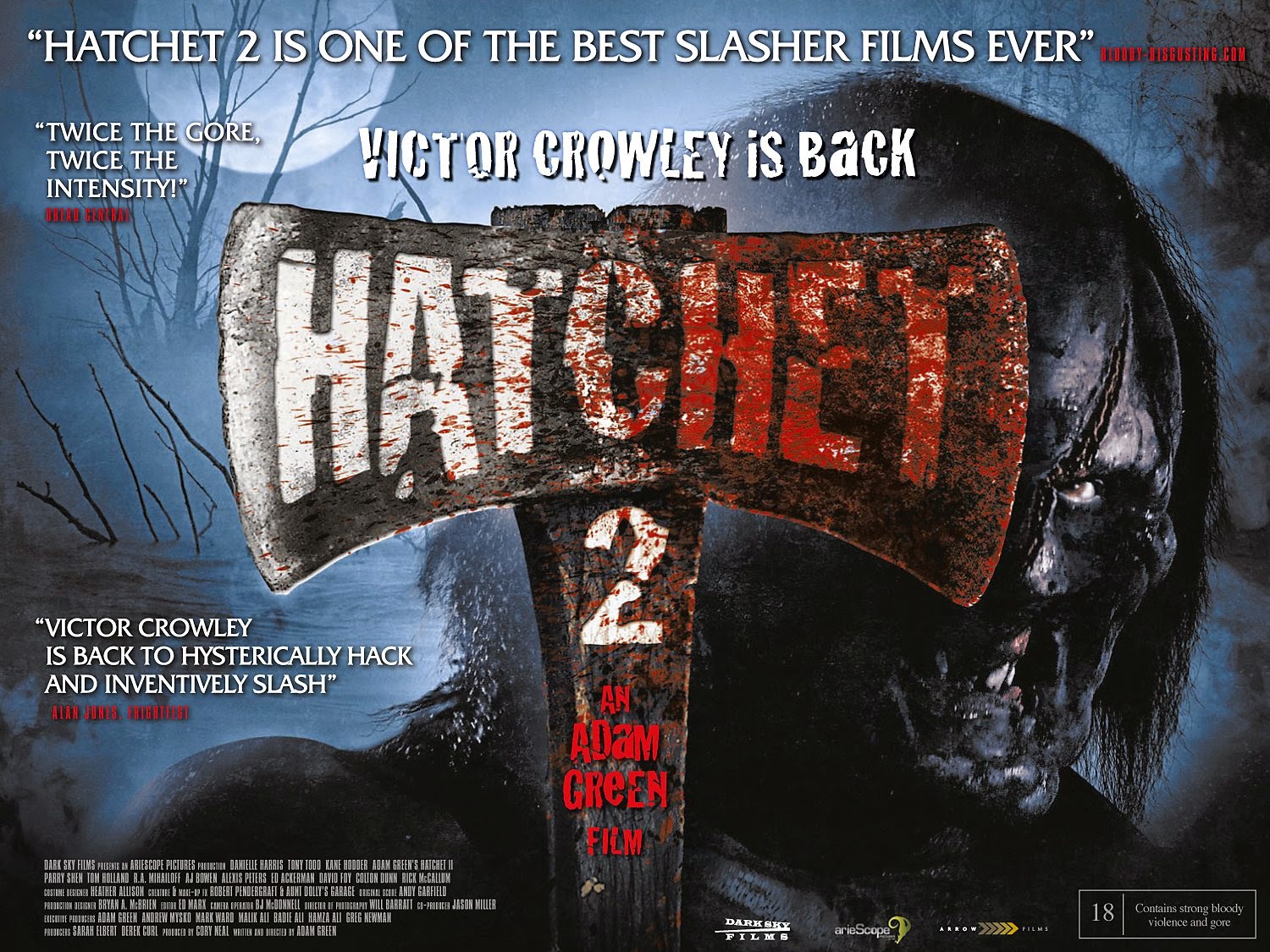 Cult icon Tony Todd (Candyman, Night of the Living Dead), this time in more of a starring role, was just fantastic and such a huge presence on screen. But it's funny because sometimes he spoke with a Jamaican accent, and sometimes he didn't. So you never really know if that was on purpose, to show you that the character is in fact a phony, or if it was by accident, showing us that perhaps Todd isn't very good at doing accents. Either way, next to Kane Hodder again delivering the goods as Victor Crowley, Tony Todd knocked his portrayal of the enigmatic Reverend Zombie out of the park. His delivery, while quite hammy, is without a doubt the best performance in here.

As far as straight-up slashers go, Hatchet II delivers the goods. It's an often-times tense filled orgy of creative kills one after another, with some outstanding practical effects work. But I didn't love it as much as I did the first film, and here's why. While Hatchet was full of spirit, mixing just the right amount of laughs, lightheartedness and horror, this sequel feels more like a run-of-the-mill effort, nixing a lot of the heart that went into the first film, for more of a serious approach. And you know, that's all fine and well if you know this going in. But after coming off of writer/director Adam Green's insanely entertaining homage/throwback original, this feels more or less of a letdown in comparison. And I know, you can argue that sequels rarely live up to the original, which is sometimes true, but not always. There are a ton of sequels that can and do actually top the original in many ways, but Hatchet II is not one of them.

Another issue I had was the casting of Danielle Harris in the role of Marybeth. Not sure what the deal was with recasting that role, but even though Harris is a great actress and one of the biggest scream queen's we have working in film today, I actually preferred the original actress in the role, Tamara Feldman. I can't put my finger on it, but Harris just didn't fit, and though I'd never seen the girl who played her in the first film before, I actually thought she was a much better fit. And not only that, was I the only one who found Harris annoying? It's odd, since I actually like her as an actress. But somehow in some way, she came off as incredibly unlikable. Am I alone in thinking this?

One of the great things Green does with these Hatchet films is he fills them with a who's who of the horror community. So I've already mentioned that effects legend John Carl Buechler returns in the role of Jack Cracker. But another horror legend, writer/director Tom Holland (Fright Night, Psycho II, Child's Play) also has a role in this. And if you're a fan of the Texas Chainsaw Massacre franchise like I am, you'll surely recognize the name of R.A. Mihailoff (Leatherface: The Texas Chainsaw Massacre III), who played ol' Leatherface in Chainsaw III, but is virtually unrecognizable in this. And then you've got Tony Todd, Danielle Harris and Kane Hodder. Adam Green knows how to put some smiles on our geek horror faces, doesn't he?

* Minor Spoilers
There was a moment, where Candyman and Jason were fighting, and it was like my geek horror brain almost melted. I'm sitting here freaking out over the fact that I'm seeing Candyman (Tony Todd) go head to head with Victor Crowley (Kane Hodder-Jason) and it was almost too much to comprehend. And that's why I love these movies so much, because Adam Green knows what we love and knows what we want to see. I mean, who would've thought they'd ever see this? And the kill was nothing short of ...............brilliant. I don't think I've actually ever seen that particular kill, which was awesome! I wish this film had more geek-out moments like that, or that the fight itself would have been a little more outrageous, because here you have two horror titans battling it out, something we'd never thought we'd see. But you can't have everything, right?
* End Spoilers

My final thoughts are that while nowhere near as fun or spirited as the first Hatchet, it's still a well-made and enjoyable slasher film with a more serious and darker tone. In fact, while it didn't floor me the way the first one did, it's still leaps and bounds better than most horror films you see today, and for that, I love and commend what Adam Green has done with this franchise. Hatchet II again displays some insane kills, gore and impressive practical effects work that make you question why filmmakers and studios insist on CGI over practical effects work these days. Yea, I know the answer is that it's just cheaper that way, but still. While Green's direction seemed generally lacking in terms of style this time around, it's a minor complaint when you compare it to the overall entertainment value. It's a good sequel to a great film. It just won't knock your socks off the way the first one did.