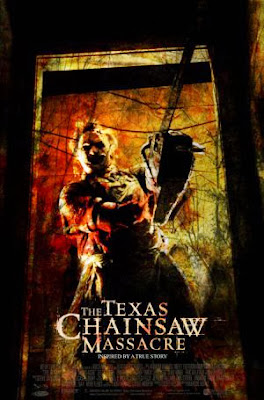 Not being a fan of remakes in general, in fact quite loathing a good 90% of them, I find myself liking these Chainsaw (TCM, TCM:The Beginning, TCM 3D) updates more than I should. In fact, these along with the Friday the 13th reboot are actually pretty damn good horror films. Whether you think it's a good thing or a bad thing, I should add that both the Friday and Chainsaw reboots were both helmed by video and commercial director Marcus Nispel.

But getting back to my point. I remember loving this thing when it first hit, but I think this was at the beginning of the whole remake/reboot craze and I don't think that whole concept had yet gotten to the bottom of the barrel garbage that we've been getting lately; a lot, I might add, that also came from Michael Bay's Platinum Dunes banner.

So it's Halloween night, and while everyone else has something going on, I'm sitting home alone looking for a horror film to watch. Particularly, I was in a "Slasher" type of mood. Being as I was itching to watch John Carpenter's Halloween, but not owning a copy (GASP!!), I went with what I had in stock. And I'd been meaning to revisit this one for some time. So what better excuse right? Well let's do this.

I realize a LOT of others don't agree with my point of view, but I seriously think this is a great horror film done right, remake/reboot or not. Director Marcus Nispel has done a bangup job bringing this dying franchise to life, and not in the sense that it necessarily tries to eclipse or even make you forget about the 4 films that came before it, but rather offers a refreshing and much needed update. Considering all the other horror franchises out there, the Chainsaw films have had about the least made, which is surprising because you'd think it could be easy coming up with different ways to have a guy running around with a chainsaw killing people. But yea, not the case with this one.

After blowing us away with the original in all it's dingy, gritty and almost documentary style realism, co-creator/writer/director Tobe Hooper decided to go the complete opposite direction with his follow-up, to mixed results. I'll admit, I've seen it countless times, and as much as I try to like it, I find it hard to sit through. Mainly because the constant screaming and yelling from Chop Top and others give me a headache. But overall, the silly vibe just doesn't gel very well with me, even though Dennis Hopper is pretty badass. Great effects, great set design and amazing trailer, but as a finished product, it's not a very good Chainsaw film. Now Part 3 I consider a great horror sequel, but I know a lot of other's don't. Personally, it's top notch filmmaking and holds that constant dark "something bad is about to happen" vibe throughout. Sure it's not very gory, but maybe we'll get an "uncut" version some day. Yes, I realize we already have an "uncut" release, but it's not really "uncut". Let's be honest here. Watch the "Special Features" on that disc and you'll know what I'm talking about.

Five years after Part 3 was released and failed to impress at the box office, the co-creator/writer of the original classic decides to give us another one called "The Next Generation". I'm just gonna leave that one alone.

Almost a good 10 years passes by before Michael Bay's Platinum Dunes decides to use this film as one of their first franchise reboots and while a lot of people were skeptical, ultimately became a box office hit. And why not? It's got a "lot" to admire. Great camerawork, an authentic gritty atmosphere and a no-holds-barred attitude that makes this better than you expect it to be. But most important, Andrew Bryniarski as Leatherface is one big scary son of a bitch, taking a different approach than all the other's before him.

They stick to the original story pretty well, only changing a few minor plot points, characters and adding a few new ones, but overall, it's very similar. Yet it plays out so differently because of it's structure. It really never slows down to be dull at any point. In fact, about a good 15 minutes in and it's just a nonstop ride of death and dread and chases and well, you get the picture. The infamous "dinner scene" is cut, but that's alright. This film moves fast enough that you won't miss it.

Not to beat a topic to death, but as I mentioned this earlier with my Chainsaw 3D review, and several times in others, I just don't dig remakes in general, especially in this era of the quick-cut shaky-cam. But I enjoy these new Chainsaw films. Maybe it's the simple fact that in the 4 previous films, between 1974 and 1994, (and the fact that there were only 4 of them in 20 years), we were only given 2 good ones (*open to debate). Of course with these new ones, the ending of 3D was stupid and ridiculous, but I even liked that film for the most part; I just need to erase that last 20 or 30 minutes from my memory. I sure as hell can't say that for a lot of these other horror reboots. Right off the top of my head, Samuel Bayer's Nightmare on Elm Street reboot/remake comes to mind. What a pointless, needless piece of crap.

For my money, this is about as good a horror film you can get, let alone in the "remake" sub-genre. It's got all the bells and whistles that come with a big budget horror film, yet made with a gritty realism that you rarely find in films anymore.
Posted by robotGEEK at 3:42 PM