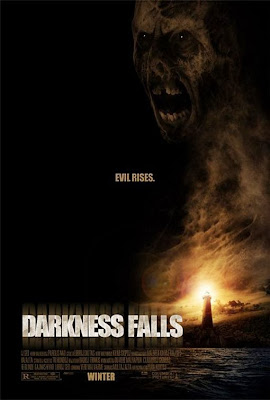 Oh Christ, where do I begin. I've heard of this film. I've heard it's horrible, stupid, lame, whatever...all those things. I've also heard it's a horror film about the tooth fairy. Ok, I'm game. I mean, it sounds silly, but you never know, right? But then I learned it's directed by Jonathan Liebesman, who I happen to really like. You might not recognize the name, but you've probably recognized his signature style. While not being a fan of the shaky-cam concept in general, I've always felt Liebesman was one of the very few that could handle it well and make it look artistic, whereas most others just do it because it's fast and easy. Liebesman has a keen eye for visuals and because of this, I'm a huge fan of his Texas Chainsaw prequel, TCM: The Beginning, and Battle: Los Angeles. So despite some reservations, I thought "What the hell?". "Maybe it's not that bad".

While I love watching a bad film and loving it for the sake of it being so bad, I honestly hate ripping films to pieces when they're just bad, which is where Darkness Falls......ahem, falls under. Pun intended. What a mess. No, scratch that. What a terrible, nonsensical mess. I'll admit, the first few minutes got my attention. If anything, the film looks good. While not shooting in his trademark shaky-cam style, he gives the film a clean stylish look. And the opening credits were pretty cool, but when the films over, you'll realize that the opening and ending credits were probably the best things about the film, and that's never a good thing.

I'm going to share Wikipedia's synopsis because it sums it up clearly and quite honestly, I don't have the energy to come up with one myself:

The events of the film take place in the town of Darkness Falls, which is based on the town of Fall River, Massachusetts. It begins with the legend of a widow, Matilda Dixon, who was adored by all the town's children. Matilda gave them gifts and gold coins when they lost a tooth, thus earning her the name "Tooth Fairy".
After a fire in her home left her horribly disfigured with an extreme sensitivity to light, she wore a porcelain mask, and only went out at night.
Although the children adored Matilda, the adults were suspicious of her and one day, when two children went missing, the townspeople quickly blamed Matilda. In their anger and paranoia, they hanged her, ripping off her porcelain mask and exposing her face to the light. Out of despair and betrayal, Matilda, with her dying breath, swore vengeance upon the town. Soon afterward, the two missing children returned home unharmed. The town, realizing their mistake, quickly buried Matilda's body along with their secret.
The story of Matilda Dixon, the Tooth Fairy, is told for many generations after her violent murder. Legend has it that her spirit visits children on the night they lose their last baby tooth, as they slumber in bed. However, should any person see her when she visits, they become cursed and marked for her deadly vengeance for the rest of their life-- assuming they even survive their first encounter.
So much of this film makes no sense, which is where all the frustration comes from. So she comes to you when you lose your last baby tooth, which is usually early teens I believe. In this story, a young boy named Kyle sees her after she attempts to take Kyle's last tooth, but instead kills his mother. Kyle is able to live because he was smart enough to turn the lights on, something nobody else seems to be aware of. So since he's seen her, he's cursed for the rest of his life until she can finally kill him if he's ever in the dark. She is a vengeful bitch. Jump a good 20 years later and he's still fighting this incident on a daily basis when an old girl he used to like when he was young has a little brother who's going through the same thing and she wants his help. Reluctantly, he agrees. And the story pretty much unfolds as the tooth fairy basically stalking these two, (Kyle, the old girlfriend and her little brother) for the remainder of the film and killing anybody else in her path.

Here's what I don't understand. In the beginning, when Matilda was hanged and issued that curse to the town, how the hell did she even know how to do that if she was just an innocent woman who loved children? It's not like we all have a curse handy when the time calls for it. And why is she obsessing all these years over this one kid when you stop and think about it, she's gotta be a busy gal/demon. So while she's chasing this now adult Kyle and this little boy pretty much on a minute by minute basis, she's also killing countless of others who come across her path in the process. I don't understand what her purpose is. So since she swore vengeance on this entire town, she shows up when you lose your last tooth and if you see her, she kills you? Does she actually collect your tooth? And what if you don't see her? Does she just show up and takes your tooth and moves on to the next kid? Why kill all those others, the adults, in the film when she's after Kyle and this little boy? I thought it was a curse for the children? Because if she was just going to kill anybody randomly because they saw her, there wouldn't even be a population left in that town after a few years, let alone 150. So much of this film just makes no sense whatsoever. Not to mention the fact that it's dull, and devoid of any scares or gore. Maybe they were going for mood and atmosphere, but it didn't seem to hit the mark in that department.

If you've read anything on this film, it's had a storied and tough production, though financially it actually turned a slight profit. I've even read that director Jonathan Liebesman has basically disowned this film completely. And that the studio, for whatever reason, had Stan Winston come in and redo Steve Wang's tooth fairy makeup for the final product. Even that is a surprise considering the tooth fairy that Winston did was nothing to write home about.

I don't blame director Liebesman for wanting to have nothing to do with this. It doesn't look or feel like any of his other films and if this is the worst he can do, then he's made out alright in the end. It's just that as far as horror films go, it's about as uninteresting and uninspired as they come. Though truth be told, it seems studio interference might be to blame for this one.

Verdict: Skip it. You'll only be frustrated at all the insane plot holes and devices used to move the story along that just don't make any sense.
Posted by robotGEEK at 10:27 AM