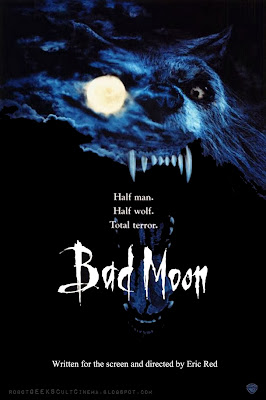 I'm just gonna cut to the chase; Bad Moon was awesome. A film that took me so long to finally watch, and one that I find surprisingly low on the "Best Werewolf Films" lists of other bloggers, critics and filmgeeks. Why is that? For me personally, this is going to rank high up on that list and for good reason. I'll explain.

I've always been a big fan of Eric Red whether he's just writing a screenplay or both writing and directing. The guy has genuine talent in both the horror and thriller genre's and while he doesn't have a large output, the films he does have under his belt are quite memorable, beginning with The Hitcher. Does anyone out there "not" love this movie? To date it's one of my all-time favorites. He's also co-writer of Near Dark. I'll admit, Near Dark didn't really do much for me as far as cool vampire films go. The ingredients are all there, but it was the execution that fell flat, which is surprising when you consider that you have both Eric Red and Kathryn Bigelow writing and Bigelow (Blue Steel, Zero Dark Thirty, The Hurt Locker) directing. Even with it's rock solid cast of Bill Paxton and Lance Henrickson, it just always felt like it was missing something. But despite Near Dark's slightly lackluster vibe, he's continued to turn out quality work ever since with some personal favorites being Blue Steel, Body Parts, The Last Outlaw and now Bad Moon.

Okay, so....Bad Moon. I've known this film existed but have never really heard anything about it. Usually a cult film will generate some kind of buzz, but this one never got any for some reason, so I never really gave it a second thought until recently when it was featured on JoBlo's "Best Movie You Never Saw" (I think?) column and finally, "someone" had something good to say about it. Let me rephrase that, they had something "great" to say about it and it was just the push I needed to get my ass in gear to check this sucker out. 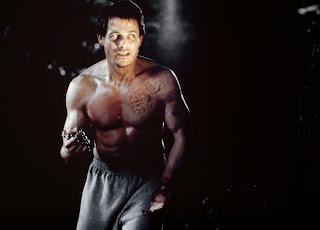 Based on the novel Thor, by Wayne Smith, Bad Moon kicks off with one helluva bang. I mean literally, the first 10 minutes are the absolute best 10 minutes of the film. I actually found myself rewinding that whole segment about 3 times because it was that badass. Sure the rest of the film doesn't quite live up to that incredible opening, but it doesn't make the film as a whole any less entertaining because despite it's minimal setting and pretty straightforward approach, it's got tension up the wazoo and enough suspense, great camera work, outstanding monster effects and a stellar performance by Michael Pare that drive this baby home. I've always liked the guy because he's a solid actor, but man he really delivers in this one. It's really Pare's performance that makes the film work as well as it does. Interestingly, besides Pare there's really only 3 other co-stars, adding to the films small scale approach and setting.

What makes this film interesting is that when it's over, it's such a simple premise. After getting bit in the jungle by a werewolf, Uncle Ted (Pare) decides to go visit his sister and her son in the hope that the family bond and the power of love will cure him of his new curse. Their family dog Thor knows what's up though, and he will play an integral part to the story. And that's pretty much it. 95% of the film takes place either in or on the land surrounding the sister's house in the woods. Yet writer/director Eric Red is able to build up so much tension, suspense and moments of pure genius in the film's short running time, and at 1 hour and 20 minutes, it's as long as it needs to be. And as I mentioned before, the makeup effects are outstanding. In fact, while werewolf films are not exactly scarce, the practical effects in this one are downright impressive and raise this one heaps above most. I also got to give credit where credit is due and with this film, a lot of that needs to go to Eric Red, hands down. While having only made a handful of films as a director, Bad Moon is surprisingly polished and Red turns out some really stunning visuals as well as moments of inventive filmmaking.

But wait, let's get to the few issues I had with it before I end up marrying this thing. For one, and probably it's one biggest flaw, is the one "change" scene it had, which happened at the end of the film. Even by 1996 standards, it's pretty weak, made all the more unsatisfying by the overuse of 90's CGI. And that's a real bummer considering it's the films one and only "changing" scene and the only time it uses said CGI. I'm sure at the time Red and the effects crew felt that CGI was the practical way to go, or that maybe they had come up with a way to make it look more inventive and natural, but by today's standards it's somewhat comical, even resulting in a slight chuckle......for me at least. But you know, that's really it's biggest issue even when you consider some of the plot goofs like the time the sister gets 8 shots out of a 6 shot revolver. Funny stuff. 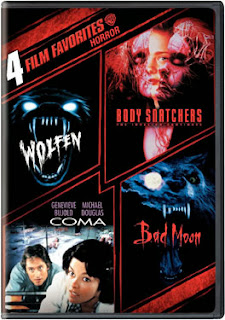 Nitpicking aside, one of the best werewolf films out there and one that more people need to discover. It's also a testament to writer/director Eric Red's talent as a director and genre filmmaker. I only wish he had made more films, even if he was just a director because the aesthetics he uses are awesome.

The rundown on releases:
As far as releases go, sadly there hasn't been a real standout one, which is a shame. First off we have a bare bones 2000 release from Warner Brothers devoid of any real special features. It is in widescreen though, so that's something. And while not insanely expensive, it seems to go for a lot higher than I would have imagined, even in the "used DVD" market. Must be because of it's cult status. The only other release we have to choose from would be where it's included in Warner Brother's "4 Film Favorites" pack as seen here on the right, along with Wolfen, Abel Ferrera's Body Snatchers remake and Coma. This set is actually a little cheaper than the other release if you want to actually own a hard copy. You can, however, rent or buy it digitally from Amazon Instant Video, which is how I saw it. Whichever way you decide to go, watch it. It's reeeaaally good.