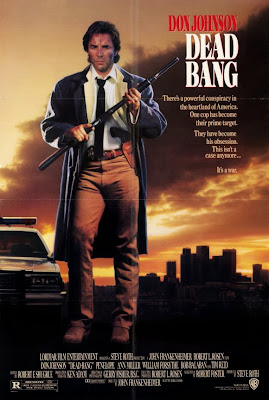 Dead Bang is a film I've been trying to see for 24 years. Okay, maybe I haven't been really trying all that hard, but ever since it was released in '89, I have always wanted to catch it, but never succeeding for one reason or another. It just looks cool as hell, and it's got Don "Crockett!" Johnson in his prime and has genre director John Frankenheimer behind the camera. Sounds like a good enough bag of ingredients to turn out a healthy dose of Badass Cinema to me!

Well, frankly, Dead Bang is a mixed bag. It's a well made and competently made film with a hard-edged approach to the material, with some good action scenes and an intense performance from Johnson, but it lacks any real excitement or gusto. Visually, it's made simple and pretty straight-forward. You'd never call it stylish (as is the case with any Frankenheimer film), but it sustains a constant hard-edged look and vibe made all the better by the use of practical effects for the few action sequences spread throughout the film. And surprisingly, there is depth to the character of Jerry Beck (Johnson). He's a divorced father who's been served a restraining order, so he's dealing with the blow of not being able to see his kids anymore as well as getting into heated exchanges with his ex. So they try to give Beck some character, and they succeed, but it doesn't really make the film all the better for it either. They could have easily cut 20 or 30 minutes of this backstory stuff on Beck's character and instead focused more on some of the gritty aspects of the story, or just on the action in general, which is pretty sparse.

But it's really hard to dwell on the negatives because as I said before, it's a well made film after all and you've got Don Johnson being a badass. Even when the film lulls for a bit from time to time, it's fun watching him on the screen. This was made at his tail end run on Miami Vice and I assume he was hoping to transfer his star power onto the big screen, which shockingly didn't happen. Not sure if he just wasn't being offered the roles or if there was some other reason at play, but regardless, he never received the star power he had when he was on television. Just as well I suppose, because 7 years later he had another hit show for another 5 years with Nash Bridges. What's strange though is that if you look at his filmography, apparently he's been acting nonstop all these years, which is news to me since I assumed he had retired after Nash Bridges. I mean, I never saw the guy again. No cameos or full on roles in anything from shows to movies, until he popped up in Machete in 2010 and again in Tarantino's Django Unchained in 2012. But yea, he'd been busy all that time. I just didn't know about it. And here I was thinking "Hey! Johnson came out of retirement for Robert Rodriguez and Quentin Tarantino!". Apparently not. I was wrong. Dead Bang wrong. Ah hell, that didn't work. Forget it.

What I find most interesting about this film is it's eclectic cast and production crew. For one, you have John Frankenheimer (French Connection II, Ronin, The Island of Dr. Moreau), who's never been consistent with his quality of work. But it's also the only film written by Robert Foster that made it to the big screen. The rest of his career has kept him busy writing and producing television shows. So maybe that explains why this isn't as badass as it could be. But then there's the cast. The one and only William Forsythe turns up as a stiff and unreliable FBI agent with an usual way of delivering his lines and a who's who of character actors like Penelope Ann Miller, Tim Reid, Michael Jeter, Mickey Jones, Tate Donovan, and Bob Balaban of all people.

A solid effort and overall, and a solid film that could have used a little more action and maybe a little more style. What makes it worth the trip though is that it's got substance. You gotta give them credit for that. And even though it didn't have a lot of action, the action sequences they did have were handles nicely.

As far as releases go, all we have is a bare bones full frame release going all the way back to 2004 when they still used cardboard for the DVD covers. So if you're as anal as I am about watching films in widescreen or in their proper aspect ratio, you're going to be disappointed because this version is really no different than watching it on VHS. But being as it's not generally well known or considered a fan favorite, I doubt any studio will ever fork out the dough to give this a decent release. Sad but true.
Posted by robotGEEK at 10:09 AM