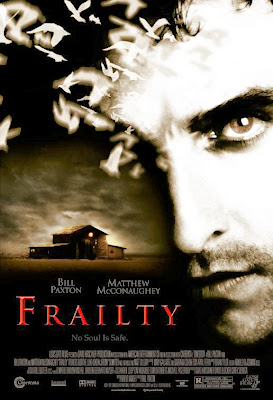 I'll bet you've seen this DVD at your local retailer for like five bucks or local video rental place countless times and just passed it by. For one, you've probably never heard of it. And secondly, the cover offers nothing in the way of explanation in terms of what the film is about. Yea, it's kinda cool and dark, but an image of a farmhouse and a closeup of McConaughey's face is as generic as they come. And the title Frailty doesn't really exude any kind of excitement. I mean, that's literally a title you can use in almost any genre when you think about it. I'll bet you also didn't know that it's the directorial debut of Bill Paxton. Yes, "That" Bill Paxton. You know, Chet, Pvt. Hudson, whatever you wanna call him. And oh boy, what a helluva debut this is.

Should you take the time to actually sit down to watch this however, you'll be treated to one of the most underrated psychological thrillers in the last couple of decades. Not only that, it's undoubtedly one of the most stylish and impressive directorial debut's I've ever come across, and one you'll more than likely agree with.

Frailty centers around a west Texas single father of two boys who's about as wholesome and hardworking as they come. Things are all fine and dandy until one day the father (only known as "Dad") has a vision from God that tells him he will be a demonslayer and that God will give him a list of demons posing as humans that he needs to slay.

Frailty is a Gothic America nightmare. What makes it so scary is because the things that happen can indeed happen in real life. I don't know anybody like this personally, but we all know they're out there. And while not a horror film in the conventional sense with monsters and jumps and scares, the constant eerie atmosphere and overall tone make for an ultimate scary experience because of it's religious overtones. God has told the father to do these horrible things, so he takes them as fact and feels no guilt or remorse about it because according to God, they are demons and not humans. When he finds these demons he supposedly sees their sins when he touches them. What's eerie and most of all disturbing is that you never know whether the father is just crazy, hallucinating or in fact seeing visions from God and Angels who tell him to do these horrible things.

Frailty, while not a perfect film, has so much to offer in the way of a genuine psychological thriller that because it's beautifully shot by Bill Butler (Jaws), stylishly directed by Bill Paxton and with some outstanding performances by everyone involved, that you can forgive it's very minor flaws. More than anything though, mad props need to go out to Bill Paxton in the directors chair. Of course he nails the role of the hard working single father who would do anything to protect his kids, but it's his role as first time director that will really leave a lot of people quite shocked. It's damn good stuff with a major Hitchock influence. Of all the projects to take on in his long career, I'm not sure what compelled him to choose this as his first attempt behind the camera, but the dude knows what he's doing. It's like he's been studying or taking meticulous notes for that one day he'd finally get his shot. Let that sink in for a bit. Chet directed a psychological thriller, and it's a damn fine one. Who knew he had it in him? And why hasn't he directed more films other than that golf pic 4 years later?! Seriously, he's only made 2 films, but I can't vouch for his second effort as hit's a........golf drama. But with Frailty he's certainly left an impression.

Aside from it's bleak and dark subject matter, Frailty offers a healthy dose of surprises so I think it's best to end it here so as to not spoil too much for you. It really is a film you need to discover for yourself and immerse whole-heartedly in this Southern Gothic nightmare.

Posted by robotGEEK at 6:58 AM