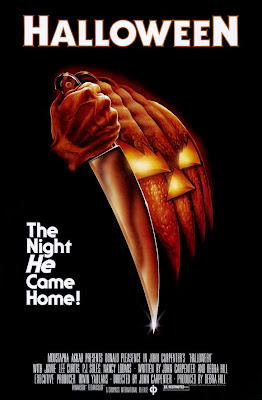 This Halloween season, more than any other, I've immersed myself in the Halloween franchise and with horror films in general. I've always loved horror, but most of the time I'm changing it up with horror, action, badass cinema, or almost any other genre. But seriously, I don't think I've ever had the need or want or drive to check out as much Halloween as I possibly could as much as I have this past goulish season.

With Rob Zombie reinvigorating my love for the franchise recently, I decided I should revisit Carpenter's original classic masterpiece. It helps that I've also been in somewhat of a Carpenter kick these past few months also, devouring everything Carpenter I could get my hands on. And oddly enough, Christine has been popping up a lot on AMC, whereas I don't ever recall seeing it on television before. But recently, I've caught it about 3 different times and I'll sit down and watch it every single time. I've also seen this pop up regularly the whole month of October, but it's always in a dreaded pan and scan or full frame. Seriously AMC? But anyway....

It's been a long while since I've sat down to watch this one. Undoubtedly Carpenter's most popular film to date, I just never felt the need to revisit this one often. We all know what happens, how it plays out and why it's as popular as it is. But finally making the time to revisit this for the sake of the Halloween season, I'm still struck at how amazingly effective it all came together so perfectly. Beginning with it's opening credits and opening sequences, his use of the steadicam is just nothing short of brilliant. This is made all the more apparent by director Rick Rosenthal's mediocre use of the concept in the sequel just a few years later. Not that Rosenthal is a bad director, just not a very inspired one.

What also makes Halloween so effective is it's simple take on the slasher film material. I mean, we've had slasher films before Halloween, but they were never made as popular until John Carpenter revitalized that little sub-genre in 1978. Let's face it, we wouldn't even have Friday the 13th were it not for Halloween. But because of so many "right" choices Carpenter makes, it comes off as just brilliant indie filmmaking. His camerawork, his music, the casting choices and most importantly of all, a cool looking and tough as hell Michael Myers. See, that's a crucial aspect to this series because let's face it, some of these dudes who have donned the Myer's mask in these sequels are just not up to snuff for the gig. I know I've bitched about it before, but man, George Wilbur in the Myers jumpsuit for Halloween 4 was.......distracting. Yes, he's tall, but he's also the thinnest of the Myers bunch. So thin in fact that he has to have shoulder pads underneath that jumpsuit. But I digress. In this film, Nick Castle's portrayal of Michael Myers pretty much defined the role for anyone to follow, some with varying degrees of success.

We've all seen Halloween right? I don't think I need to bother with a synopsis or a play by play. As basic a story structure and premise as it is, that's also one of it's biggest strengths. It's never really explained "why" Myers is pure evil, or why he was so evil at such a young age, unlike Rob Zombie's need to explain or justify this in his remake from 2007. He just is and nobody except Dr. Loomis is completely aware of this. But do we really need all that backstory? Not really. Carpenter and writing partner Debra Hill pretty much sum it up with the opening sequence to get the story going, but without really pinpointing anything that led him to be this way. One day he just snaps, end of story. Sometimes less is more, or the power of your imagination is better than what could have been written on paper. Clearly Carpenter and Hill figured this out a long time ago.

As many films as I've seen and as many horror films as I try to devour, Halloween still holds up remarkably well 35 years later. No gimmicks, no over-reliance on gore or effects, or tricky camerawork; instead Carpenter utilizes good ol' fashioned storytelling, beautiful fluid camerawork with a keen sense of how to properly frame a shot, an amazingly simple yet effective score and strong performances from his leading cast. Just try and think of all the other little independent horror films that came out about the same time and see where they ended up. John Carpenter's Halloween has sustained and lasted and overcome because of his sheer talent. It honestly just doesn't get any better than this.

As far as releases go and trying to determine which one is the best bang for your buck, there are just way too many to even comprehend. I myself watched the "Extended Edition", which I didn't even know existed until a friend lent it to me for this review. From what I understand, Carpenter and the cast went back after the film was completed and shot additional scenes to fill in some time gaps for it's television airing since it apparently wasn't long enough. But the newly restored 35th Anniversary Blu-ray also seems to be a great investment and at an incredibly great price. Seriously, you can't beat the price. Whichever way you go, it's surely a trip worth taking and proves time and time again why it's considered one of the best of the genre.
Posted by robotGEEK at 1:45 PM