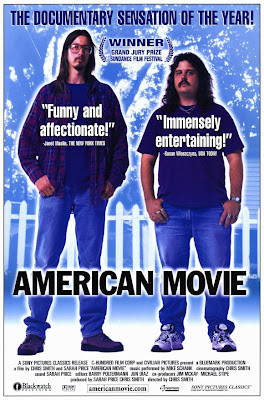 Here's a quick funny little anecdote. My brother-in-law has been riding my ass for years to see this film; randomly throwing a "Have you seen American Move yet?". He insisted that I would love it, knowing how much I love films and how much I love a good documentary, especially those on the subject of film. Well I finally sat down to watch it and let me tell ya, I can kick myself for waiting so fuckin' long. This was.............awesome.

Sometimes when I watch something I'll immediately start a post with just the title and save it so that I don't forget. I watch so many movies that that is often times the case. Sitting here on Thanksgiving day I decided to browse my list of drafts that I started but never finished (of which there are plenty), and came across this one from many, many months ago. I've had plenty of time to let this simmer in my brain so what the hell. Let's do this.

American Movie should be required viewing at any film school or film program on what "not" to do when you're trying to get a film made, much like the fascinating documentary Overnight. Maybe these two documentaries should be all they need to show you in film school. "Here you go kids. Watch these 2 docs. You see what they do in here? Do the complete opposite.".

I don't really want to give too much away; the more you witness first hand upon your initial viewing the better the experience will be. Let me just say that while informative, it's also utterly fascinating as the films protagonist, Mark Borchardt, is one odd duck. You wonder how he's able to continue moving forward after some of the decisions he's made and the people he chooses to surround himself with. You wonder how much a single man with no money can take before he's defeated. It's his passion really. He's extremely passionate about making movies made all the more intriguing by his ability to charm almost anyone with his words. Does he possess any genuine talent? That's debatable. One things for certain; despite his background, his upbringing, his lack of education and book smarts, the guy has massive amounts of ambition and knows how to think quick on his feet and can manipulate almost anyone around him. In the film industry, I think that's a positive attribute.

What's especially fascinating is how Borchardt, at random times, seems to have moments of clarity. These aren't very often, but when they happen you finally start to feel for the guy instead of wondering what's he on that makes him apparently oblivious to the fact that this project of his just isn't feasible. I mean, there are a mountain of setbacks that would deter any die-hard filmmaker, but these are all setbacks that happen because of extremely poor decision making on his part. While articulate, unfortunately he's also a very bad planner. But I guess if he gave up as easily as most of us do, then we wouldn't have this thoroughly entertaining documentary to experience.

His years long quest to make his short horror film Coven is chronicled by documentary filmmaker Chris Smith in this fascinating documentary about one man's struggles to overcome his personal demons, of which there are many, to prevail in his attempt at finally finishing his dream project. Debuting back in '99, American Movie has garnered a cult status. After having finally seen it, I can understand why.
Posted by robotGEEK at 2:02 PM