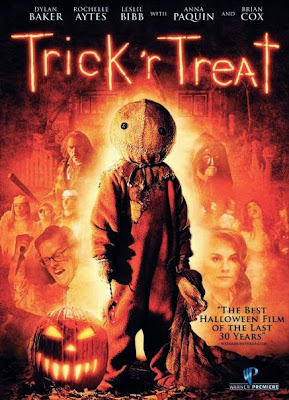 6 years. It's taken me 6 years to finally sit down and watch this Halloween themed gem. I always knew it had a sort of cult following ever since it's release, but I don't think it was as apparent as this past Halloween season where I was made fully aware of how much of an impact this film has garnered in the horror community. Hell, one channel had a 24 hour Trick 'r Treat marathon right before Halloween. What does that tell ya? Well after having finally seen it, I can see why.

Anthologies are a tricky thing. It's incredibly rare to find an anthology where all the stories are equally good. It's a hard thing to pull off effectively, which is why the "anthology" sub-genre is an extremely rare one. And even when we do get one, it's almost always a mixed bag. But there are a few greats like Creepshow and Twilight Zone: The Movie that come to mind. And then there are films like The ABC's of Death, Tales from the Darkside: The Movie or V/H/S that offer up a mixed bag of quality with some stories being great, while others are just awful. Which is the most frustrating thing really. You expect a film to be either good or bad, but with anthologies, it's almost always "some of it good and some of it bad". You're probably wondering why Body Bags isn't listed. There's a simple answer for that; I haven't seen it yet.

Michael Dougherty's Trick 'r Treat was an extremely pleasant surprise in almost every aspect. It's rare when a horror film and even a horror anthology film entertain me as much as this one did. But T'rT has so much going for it also that make it heaps better than your average film in this particular genre. Mainly because of writer/director Michael Dougherty's even handed and professional take on the material. Unlike most other anthology films, the stories presented in here all interconnect with one another, at times offering the same story in a different point of view while also having the timeline go back and forth. It's a bold and genius move for sure, but one that works effectively well because of it's strong cast and even stronger script. But that's not all. Considering this is Dougherty's only feature film as a director, you'd never know it. He's got a strong sense of "quality" that is immediately apparent in almost every shot. In the day and age of quantity over quality, that's a rare thing indeed. You couldn't quite distinguish his particular style over any other even-handed director, but regardless, it looks slick.

I have to admit, I'm really surprised that this didn't get a full on theatrical release. Yet, they'll put out these endless Paranormal style or possession themed films one after the other with intense marketing behind them, which is such a joke in the horror community. And what's funny is that T'rT is so much better than any of those films. In fact, now that I've finally seen it, and love it, I can guarantee you that this will now be a regular Halloween tradition for me and any other unsuspecting victim I force to watch this with. Because while also being a horror film, it's also a fun film. Scratch that, T'rT is a blast.

Initially this was an animated short that Dougherty had made back in '96. It took 11 years to find it's way to becoming a feature film, but even then, for some reason, it was never given the full backing of a studio, even having been delayed for a while, which is surprising considering every showing of the handful it was allowed to be presented at were extremely well received. I just don't get it. But maybe that was to it's benefit since while it didn't result in any box office numbers, it's certainly become a bonafide cult classic in every sense of the word and deservedly so.

I think what makes T'rT work so well, aside from Dougherty's deft hand at directing, is it's equally smart script. You're engaged in every story and I can't remember one instance where it ever felt dull or flat. While categorically being a horror film, it's also a clever one. There are moments where you forget that something that happened in the previous story has already happened in this one, and vice versa, until things become connected when it's all said and done. That right there is a testament to it's creative ability to effectively jump timelines and then come full circle again to wrap things up nice and neat. Before this, writer/director Michael Dougherty was a screenwriter for X-Men and Superman Returns. It's safe to say T'rT will be his legacy in the film industry.

Halloween 2013 has been such a special one for me because unlike any other ones from the last few years, I've discovered some genuine horror gems that have now become personal favorites, with T'rT be on the top of that list. As far as horror anthologies go, it's one of the best ones out there.

DVD and Blu-ray specs:
The only DVD release here in the states is pretty bare bones with only the original 1996 animated short with optional commentary by Dougherty that this originated from included as a Special Feature. Other than that it comes in both full frame or widescreen with an aspect ratio of 2.35:1.

The Blu ray however comes with a bit more supplemental material for just a few bucks more. Thankfully, full frame is not an option on this disc, so you just get the widescreen version, but it comes slightly different than the DVD as it's a 2.40:1 aspect ratio. Additionally, you get:
Audio commentary by director Michael Dougherty, storyboard artist Simeon Wilkins, concept artist Breehn Burns, and composer Douglas Pipes.Trick 'r Treat: The Lore and Legends of Halloween (28 min)Additional scenes with optional commentary by Michael Dougherty (17 min)Trick 'r Treat: Season's Greetings: Animated short with optional commentary by Michael Dougherty (17 min)School bus FX comparison (1 min)

So it's kind of a no-brainer if you own a Blu-ray player. Just get the Blu-ray.
Posted by robotGEEK at 11:03 AM