My review of Halloween (2007) and an apology to Rob Zombie 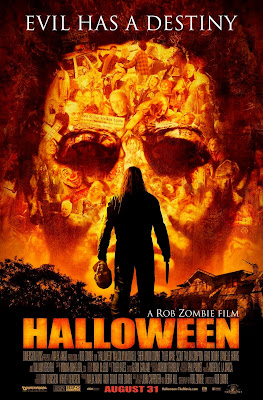 Before I get going with this, I need to get something off of my chest. I feel I owe Mr. Rob Zombie an apology. While I dig his style of filmmaking, I've always dismissed his two Halloween films purely on an experience I had watching this first one last year. It was Halloween 2012, and TBS or one of those cable stations was showing this in a severely edited version (obviously). I don't know why though, because it's got an abundant amount of nudity and gore. It's like when they try to show Scarface. What's the point when so much of it "must" be edited out? Anyway, it was on and I figured "What the hell? I still haven't seen it yet and there's nothing else on so why not?". Well, I must have been busy doing something else while this was playing and the few scenes that I did notice as I randomly looked up at it just reminded me of House of 1,000 Corpses with all the shaky-cam stuff. So I was not impressed and practically dismissed it on the spot.

His Halloween films notwithstanding, I'm a huge fan of Rob Zombie as a filmmaker. Probably more than most people, I have an insane amount of respect for the guy because he's a genuinely talented filmmaker who's not afraid to make some ballsy choices, knowing full well the backlash he will most likely receive. He's the genuine article. An artist in every sense of the word. He's authentic, even when he's paying homage to different genre's. It's been said many times that he's been simply copying other films, but I don't agree with that analysis. He's such a huge fan of films in general, really just a big movie nerd, that with each film he makes, he's paying tribute to different genre's of films that he loves. Because when you look at the 5 films he's directed to date, they're all distinctly different in style and most importantly, genre.

With The Lords of Salem blowing my mind this past year, I've become a full-fledged Rob Zombie fan. So with me being in full on Halloween mode this past Halloween season, and after having already seen all of the Halloween sequels to date, I thought I should take the opportunity to check out the one Halloween film I hadn't seen yet, Rob Zombie's Halloween 2. What resulted was a shock to my system and my favorite Halloween film experience to date. I have never had a more fun experience watching a Halloween film as I had watching Halloween 2. Straight up. So then I started wondering if my experience with his first Halloween film was off. Maybe I wasn't in the right mindset when I attempted to watch that one or "Did I just not get it?". I think it was time to revisit it and as luck would have it, I found the Unrated 2-disc set at a local pawn shop for $2. The force was with me my friends. On that Sunday afternoon, we watched Rob Zombie's Halloween 1 & 2 back to back.

What struck me almost immediately was how "off" my original assessment was of this when I saw it a year ago and honestly, I feel pretty shitty for giving it such flack for so long. Even before I saw it last year, since it's release I just never gave it a shot because even with the trailers, Zombie's signature handheld style was all over the thing and it drove me nuts. So I just dismissed it and never had the urge to actually watch it. What the trailers don't show is that while there is indeed a lot of handheld camerawork involved, it's only about a good 25% of the time whereas he implores several different styles throughout the film, all reflecting specific segments of the film. So while there is handheld stuff, there's also some really great composed shots and some pretty inventive and spectacular visual flair all throughout. In other words, this film is badass and I was wrong to judge it so harshly all these years.

I mentioned it before in my Halloween 2 review and I'll mention it again, the casting of Tyler Mane as Michael Myers is just pure genius. So far, my favorite Myers to date. Of all the guys who have donned the mask and jumpsuit throughout the years, I don't think any of them were as perfect as this guy. To date, he's the biggest Michael Myers and the most intimidating. And it was interesting taking on Part 2 before this one because in the case of the character of Dr. Loomis as played by Malcolm McDowell, it's like he's playing two completely different characters in both films. In Part 2, he's a self-indulgent egomaniac and a pig. In this film, he more closely resembles the doctor we've grown accustomed to through Donald Pleasance in the original films. And when you look at both films together, it's fascinating how vastly different all these characters are from one film to the next. Take the character of Laurie Strode for example. In the first film she's a typical teenager; cute and dresses like any other teenager you'd see in high school. In the sequel, she's an emotional mess and a much darker person because of the events of the previous film. You sense she's even somewhat goth or punk simply by the way she dresses now. And again, as with all of Zombie's films, hell-even more so with this one, he's got a plethora of genre actors all over this thing, with Danny Trejo playing a sympathetic orderly being my favorite. While I'm at it, I need to give some props to Sherri Moon Zombie. Again, simply based on a few scenes I had scene, I had misjudged her in this thinking she was rehashing her role as Baby from 1,000 Corpses, when in fact she turns in a solid performance as Myers's struggling mother with a big heart. With each film she's in, she's getting better and better.

But I do have an issue. As much as I love this film, I'm still not sold on the idea of needing to know why or how Myers became evil at a young age. And in taking the hillbilly approach for that matter. Even then, ultimately it doesn't explain why he is the way he is, only that he comes from a shitty home life. What's problematic is that with Carpenter's original, in the first act of the film he kills his sister and you get no back-story. He's a silent killer in every single film after that, never utters a word, ever. So for all we know, he's never been able to talk since they never actually show that in the original film. For me, that kind of adds to the mystery. It's never made clear so you always wonder, "Was he always mute?". But here Zombie shows him as an "almost" typical kid, you know, except for the killing part. Having him talk and slowly showing him regress throughout the years to silence kind of takes away a lot of the mystique behind the character. Or maybe that's just me?

This film was indeed so much better than I was expecting. To be quite honest, I think I really wanted to see it simply because it's the only Halloween film to date I have not yet seen and wanted to just complete the series and say that I have seen them all. I never, ever expected it to impress me as much as it did and to consider Rob Zombie's two Halloween films to be some of my absolute favorite from the entire franchise. He's done something truly remarkable with these films, he's reinvigorated my love for the Halloween franchise. A franchise, I might add, that I really had lost all faith in in the last 30 years with all of the sub-par sequels. I dismissed him and his Halloween films almost immediately and it's taken me this long to finally sit down to watch them and to fully appreciate their merit and his artistic integrity regarding these films. I was wrong in thinking that he had ruined an already stale franchise and for discounting him as the auteur that he is, and for that I apologize. Halloween 1 & 2 are two of the best slasher films you'll see out there.

This is also bittersweet because I've read recently that Rob Zombie is completely done with the "Horror" genre, and that before he had made this statement, he had also stated he would not have any involvement in the next Halloween film. So this is a real bummer to say the least. But, we can't discount him yet. I think he's got a lot of other things up his sleeve and I for one, can't wait to see what else he may have in store for us; horror genre or not.
Posted by robotGEEK at 11:04 AM