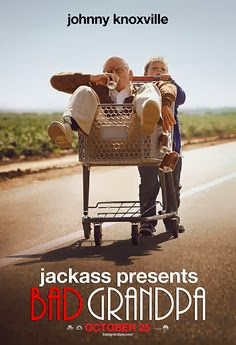 I honestly can't remember the last time I laughed this hard in a theater. I think maybe the closest would be with This is the End, but even then, it wasn't nearly as much or as hard as with this film. And I should also mention that when I went to see this, I was feeling really crappy with a bad cold. The thing is that when I get sick, which is incredibly rare, instead of really being bothered with a stuffy head and runny nose and all that, it manifests itself more with body aches and the feeling of being hit by a dump truck and then run over countless times after. That's how I feel when I get sick. So with that being said, having a film being able to muster some genuine laughs out of me when I'm feeling my absolute worst is a testament to it's authentic power of how funny this really is.

So it's all staged, obviously, and they film everything with strategically placed hidden cameras that capture unsuspecting people's reactions, which is just priceless. Because as funny as the shit they do here is, it's really the people's reaction to these situations that sell it and boy are you in for a treat. As hilarious as the trailers are for this, thankfully they save the really good stuff for the film, which as I said, is just jaw droppingly and laugh out loud funny.

Johnny Knoxville as Irving is hilarious and crazy as shit, but it's really the kid who steals the show. His name is Jackson Nicoll and I think we'll be seeing a lot of him after this. Man, this kid is something else. I'm not going to spoil it for you, but seriously, this kid is awesome.

Rest assured, if you think they put all their best stuff in the trailers, I can guarantee you that they saved the best stuff for the film and it was just hilarious. Looking for a good genuine laugh? Bad Grandpa will fill the bill.
Posted by robotGEEK at 7:00 AM