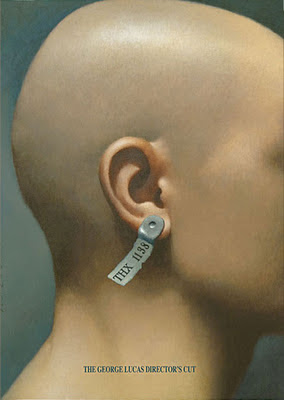 Believe it or not, George Lucas actually made a few films before the behemoth that was Star Wars took over the world, this being one of them back in 1971. I know, I know. It's crazy to comprehend, but it's true. THX 1138 is based off a student film he did in college titled Electronic Labyrinth THX 1138 4EB winning numerous awards and to much critical appraise . When Francis Ford Coppola started his production company American Zoetrope, he chose his good friend George Lucas's first feature film as his  first project to produce under this new banner. When released, the film bombed and almost bankrupt Coppola's production company.

I had only seen this film one other time before. When Lucas released his Director's Cut Special Edition complete with updated effects I jumped on the chance to pick it up on DVD back in 2004. Only problem was that when I watched it, whether it was the DVD itself or my crappy player, it kept skipping over huge chunks and freezing all over the place leaving it an incredibly frustrating experience for me. Since then it's been buried way back in my massive DVD collection basically forgotten until now. So how does it look with fresh eyes 7 years later?

I must say, this is probably one of the most visually rich science fiction films I've ever seen. The George Lucas who gave us Star Wars and the Star Wars universe remarkably is not the same George Lucas who wrote and directed this saga of a dystopian society where everything is controlled, including emotions, food intake, relationship partners as well as work and sleep habits. Of all his films, this is his most visually impressive. The imagery Lucas displays here is simply stunning, pushing the limits of the Widescreen aspect ratio to brilliant effect. The minimalist setting and design play such a pivotal role in the story itself that even with little to no dialogue, you are immersed in this reto futuristic tale of society under constant rule. THX 1138, an "experimental" film more than anything, won't win over any new fans if you're looking for something on par with his other more famous science fiction film, but for somebody who enjoys something inventive told mainly through visuals and imagery, THX 1138 is certainly a feast for the eyes.

The world of THX 1138 takes place in a self contained environment where sex is outlawed and everything is controlled by drugs. One day THX 1138 (Robert Duvall) stops taking the drugs and starts experiencing normal feelings again, mainly a sexual attraction to his mate LUH (Maggie McComie). He get's her pregnant and they are both arrested as sex is one of the biggest laws that can be broken. Meanwhile THX 1138 has met SEN (Donald Pleasence), a strange member of this society who seems to hold a fascination with THX 1138 and through certain procedures, has done what he can to get rid of LUH so that he and THX 1138 can co-habitate together as he feels THX 1138 would make a perfect roommate. While incarcerated for his sex crime, he starts planning his escape from this morbid society. He soon learns that not everything he has learned and lived is what it seems and knows he's left with no other choice but to try and free himself from this world at any cost.

What makes this film so unique is that almost nothing is ever explained. You don't know how far into the future or the past they might be. If they are even on Earth or maybe some distant planet. The history of any of these characters like who they are or how long have they been here? You don't know who, if anybody, actually rules this place. How big this world of there's is? These are all things that are left to imagination of the viewer to make up for themselves. It's an odd way of telling a story and can easily aggravate someone who's looking for answers. And that's one of the biggest obstacles this film has against it. Half the time you just don't know what the hell is going on. Things are happening and you just don't know how or why. To top it off, everything, and I mean everything, is categorized by coded numbers. People, situations, events, procedures, you name it. It's all spoken and categorized by numbers which only add to the frustration of now knowing what the hell is going on. I can see why this was such a huge failure for both Lucas and Coppola's Zoetrope pictures. For at least the first hour, nothing really happens. We're treated to many, many scenes of these branded individuals going through there mundane and ordinary daily procedures over and over again with only Lucas's inventive and brilliant camera work to break up the monotony.

Right from the opening frame it's immediately apparent that every single shot has been painstakingly planned, designed and executed to full effect. And despite all of it's flaws, that's probably the best thing this film has going for it, that whether you think it's great or sucks, it looks beautiful. For me, to be quite honest, the first 75% of the film is a complete bore. If it didn't looks so incredible, I would have given up on it after 20 minutes. But I've always been a visual kinda guy, both in my tastes and in my art. I love style, any kind of style, and if I'm drawn to a film purely for the visual aspect of it, I'll more often than not stick through it till the end, which is the case with this film. But I think for most people it's the first three quarters of nothing happening that can drive you nuts. It's not until THX 1138 finally devises a plan to escape when the film "finally" starts to take shape and offer a little more excitement than the usual "nothing". And it's in these last 30 minutes that I really wish represented the whole of the film. If Lucas had done the entire film like this it would have been remarkably better and more than likely much more profitable. These last 30 minutes kick some serious ass. THX 1138 is on the run with the help of another lost citizen he's met along the way, and we're treated to a pretty badass car chase as well as being relentlessly being hunted down by the chrome robots on there motorbikes. This last section is what ultimately saves the film and when it's over, you sort of feel a little sore at Lucas for making us sit through an hour of beautifully shot "nothing" to finally get to the good stuff where he could easily have completely gotten rid of sequences that offered nothing to the stories progress and replaced it with a much needed bit of action. I know he was't going for that type of film, but had he gone that route it woulda been a helluva film. 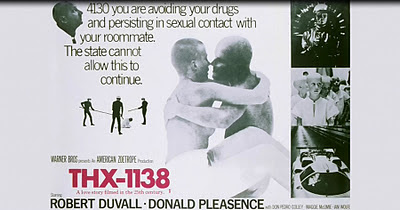 As far as the cast goes, they do really fine work with very limited dialogue. A very young and fit Robert Duvall proves why he's so good at what he does. Donald Pleasence as the calculating and possibly dangerous  SEN also turns in a fine performance, and quite possibly the most normal performance I've seen from him in any of the films I've seen him in. It should also be noted that sound designer Walter Murch (Apocalypse Now) who also co-wrote the screenplay with Lucas also did a lot of the experimental sound effects and sound elements found throughout the film. Most of the time you think it's just part of the score by Lalo Schifrin (Enter the Dragon), but it's actually experimental noise done by Murch. Some of it works really well, and some of it just seems designed to distract you from the fact that nothing is going on.
As with Star Wars, Lucas went in and enhanced all of the effects and added some digital effects sequences to expand this world and enhance some scenes by expanding some background imagery and creating new scenes altogether. 99% of it works, while one sequence in particular is just downright cringe inducing to the highest extent. I'm talking about the shell dweller's sequence when THX runs into a pack of them while on his escape towards the end of the film. Oh man that was a really lousy sequence with horribly rendered CGI animals. While you can clearly tell when and where these newly added scenes and CGI sequences are, with the exception of the "shell dwellers" sequence, it works really well and doesn't take away from the film at all. With how impressive George Lucas has made the imagery here, the effects only add to it in a good way.

Make no mistake, THX 1138 is not for everybody and I'm sure I'll get some flack from some of you for liking it as much as I do. For me, it's the visual experience that kept me hooked along with the final act that had me wanting more of this world that looked and worked much better than the rest of the film did. Whether you love it, hate it or just find it passable, one things for sure, THX 1138 had a profound impact on a lot of science fiction films that followed with it's visionary and experimental take on the science fiction genre.
Posted by robotGEEK at 10:06 PM