Review: Warrior of the Lost World 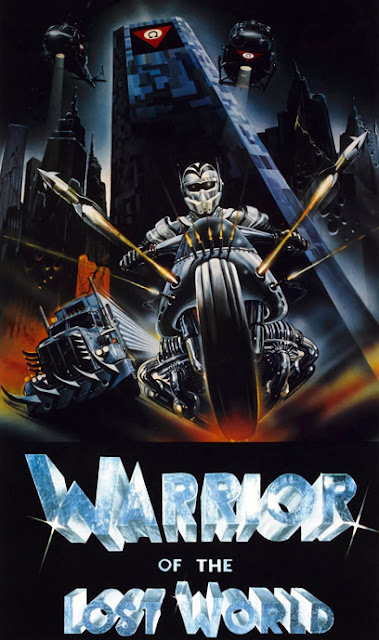 80% of Warrior of the Lost World works surprisingly well. I think I was expecting an exploitation flick, directed by an Italian with an American pseudonym like most of them did during this time, but what I got was a low budget DTV science fiction flick that looks and feels like an exploitation, but is something else altogether. Something with a more serious tone that feels like it's trying to say something about society in general, but doesn't quite make that point very clear. It's not great, or even badass in a "so bad it's good" kinda way, but if you can look past the weak parts, it's quite effective.

I think the most surprising thing about this slightly entertaining piece of sci-fi trash is that it's written and directed by a guy named David Worth (no it's not an pseudonym of a well known Italian director), a notable and frequent director of photography and cinematographer of a pretty diverse group of films like Clint Eastwood's Bronco Billy and Any Which Way You Can to the low-budget martial arts Cynthia Rothrock films Lady Dragon 1 & 2 as well as Bloodsport. Yes, "that" Bloodsport. Oh, and most importantly, the D.o.P. of one of my favorite pieces of low-budget 80's trash,  Never Too Young To Die. Have I ever mentioned how much I love that film? Just in case you don't already know, I do. It's one of my favorite "WTF?" films ever. But besides writing and directing credits on a number of films in different genre's including the Lady Dragon films, he also wrote and directed one of Jean Claude Van Damme's earliest hits, Kickboxer. I'm telling you, this guy is strangely all over the place and he's still making movies to this day.

A lone warrior on a state of the art supersonic motorcycle simply known as The Rider (Robert Ginty) is roaming the post apocalyptic land when he's chosen by a resistance group known as The Elders to free there captured leader McWayne who is being held prisoner by the evil tyrant Prossor (Donald Pleasance). Along with the professor's daughter Nastasia (Persis Khambatta) they sneak into the heavily guarded city seeking to bring the professor home and take down the tyrannical Prossor.


Warrior of the Lost World starts with a bang as our hero of the film, The Rider (Ginty) is being pursued by the Omega Militia in what is a pretty badass and extended chase sequence. The way it was shot and edited really impressed the hell out of me and worried me a bit as I feared the rest of the film just couldn't live up to that great opening. It doesn't, but that's not to say the film doesn't have anything to offer. Warrior of the Lost World reminded me a lot of Demolition Man, and I wouldn't be a bit surprised to find out that the screenwriters got a lot of there inspiration from this film. When this film isn't being silly or giving us a half hearted sequence that offers nothing to the story, the remainder of the film works surprisingly well as  a cautionary tale of totalarian rule. When it's dealing with these sequences and this topic in general, the film looks and feels great. It's in these sequences that writer/director David Worth gives the film a more professional edge and gives us less cheesy hand-held camera work. But ultimately, the totalarian theme and the above average camera work doesn't and can't save this film. While there are many things to admire about it, there are just as many aspects that make you shake your head in total confusion or disbelief.

Robert Ginty (The Exterminator) does a decent enough job as the lone warrior. His delivery, for lack of a better word, is very subdued. Almost like he's there, but he doesn't know why. Most of the time he looks lost or confused, but delivers the lines anyway even if they don't make any sense. The film is also heavily dubbed by the actors themselves, and it's really distracting sometimes because it just doesn't sound natural. Like The Rider whispers "a lot", yet it's louder than anything else going on in the scene. And I swear, if you didn't know it was Ginty up on the screen, if you closed your eyes you could swear it was Tom Skerrit. They sound exactly alike. Donald Pleasance as the evil ruler Prossor is an odd choice, especially for such a low budget film. He's not in it often, but when he is on screen he does the most with what he's given, which isn't much really. But probably the strangest addition to the cast for me would be Fred Williamson. I don't know what the hell he was doing in this. He seems so out of place and even more so since his role is so small that his total screen time probably only runs maybe 10 minutes. And then to find out later than he had more to do with what's going on with the so called "story" doesn't really help matters at all. Instead you just left scratching your head. Director David Worth has stated in a past interview that he was hired to write and direct a film that would match the poster art that was already made. The film had been given the greenlight before he even had a script. Unless you decided to go the "trashy" route, I don't see how you can expect an entertaining film to come out of a process like that. While we're on the subject, I should also mention that The Rider and his state of the art motorcycle look nothing like the poster art. Another deceiving piece of low budget marketing.

Bottom line, it's better than I was expecting it to be, but since it took itself too seriously and never really went the "exploitation" or "trash" route, it ended up being more dull than anything. I get the theme, but it just wasn't able to fully realize it on such a small budget and an apparently rushed script. It's definitely worth a viewing because there are a few cool sequences, some cool visual propaganda themes, even a cool and weird fist fight out in the middle of the desert, but ultimately falls flat when compared to other post apocalyptic films of this time, ones who chose to instead go over the top and ultimately felt more satisfying.
Posted by robotGEEK at 8:33 PM