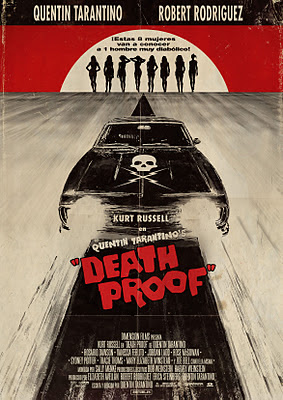 1st impression: I didn't particularly like this film. I felt it had way too much talking that had nothing to do with anything the film was about. I hated Jungle Julia with a passion. I felt it had a strong opening visually, but within 15 minutes it didn't look anything like the "grindhouse" type of film that was promised and implied with the opening credits sequence.

2nd impression: I love this film. Upon multiple viewings I've really grown a great appreciation for this film and for what Tarantino was trying to do. It's still got problems though. I still hate Jungle Julia with a passion. There's still way too much talking about "nothing". And it still doesn't look like a grindhouse flick, not like how the opening sequence promises. But overall, I enjoy the hell out of this thing.


White-Hot Terror at 200 MPH!!
The story? Eh, something about a bunch of chicks getting in a car to take another one of them somewhere where they are zeroed in on and mercilessly taunted by the crazy and maniacal Stunt Man Mike in his "Death Proof" stunt car out in the back country. Little does he know that these are no damsel's in distress and might have actually found a challenge after years of effortlessly terrorizing and killing women. In all honesty, who cares. It's Quentin Tarantino's homage to late 70's filmmaking starring the awesome Kurt Russell as a complete badass with lots of car chases and brilliant effects and stunt work.
I think it's biggest fault is the talky dialogue. Yes, I know it's a Tarantino film and it's what's become expected of his films, no matter what genre he's tackling. But oh my lord does it drive me nuts here. I think mainly because in my mind I feel like he's trying to tell us how chicks really think and talk when we're not around and I just don't buy it. And there's just so many loooooong conversations about "nothing". Whether it's in a bar or in the car, they talk and talk and talk about people and situations that are never introduced, never shown and never explained. So we really couldnt' give a shit about who they talk on and on about because we have no fucking idea who they are. And it was also the verbage and the attitude and i'm sorry, but I did not want to see a movie about how Quentin Tarantino thinks women talk and act in there clicks when they're hanging out. And while we're on this subject, let me take a moment to bitch and moan about my intense hatred for the character of Jungle Julia. For me, above all of my other issues with this movie, Jungle Julia would probably be the sole reason I would choose to never watch this film ever again..........if I chose to do so.
I hated that cocky bitch with a passion and every time she appeared in a scene, I wanted to turn the damn thing off. If that was the kind of reaction Tarantino was trying to elicit from the performance of Sydney Poitier, then he succeeded ten fold because I absolutely hated her. I've never seen anything that Poitier has ever done besides this, but I sure as hell hope she's not really the arrogant bitch she portrays in this film. I have to say, the most exciting part of this film for me would have been when she gets it at the hands of Stunt Man Mike. I actually cheered when she "finally" met her doom and could not have been happier.

Another gripe would be, as in Planet Terror and Machete, we're given a really solid opening that realistically looks like something out of the late 1970's, complete with dust grains, scratches, opening credits and all that. I mean, it looks badass! But as with the other films, after 15 minutes the style's converted to modern filmmaking and there are no more edit jumps, or scratches on the screen or graininess of the picture. They do it so gradually though that you really don't notice at all until the movies almost over. I just wish they had stuck to that look and feel for the entirety of the film. For me, it would have made a world of difference in terms of the experience. 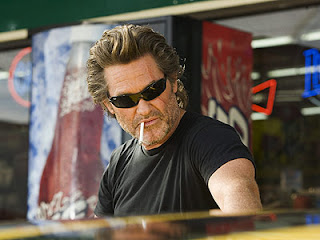 So yea, that's enough griping from me. Because ultimately, besides these little flaws and the very major flaw of Jungle Julia, the movie succeeds on every other level and I freakin' love this film with a passion. Kurt Russell as Stunt Man Mike was nothing short of brilliant. I don't know, I think next to Snake Plissken, he might have found his second most iconic role in his career. The ability to play both charming and pure fucking evil is not easy, but the guy pulls it off victoriously and it was pretty much any time he was on screen that the film really came alive.  I had always thought he would have made an awesome older and wiser Batman had they ever decided to make Frank Miller's brilliant The Dark Knight Returns.

I loved the effects work in here. That sequence where Jungle Julia and the other girls in the car get nailed by Stunt Man Mike on a dark and lonely road is pure evil genius. I couldn't tell you how many times I've watched that sequence in slow-motion frame by frame (yea, I'm sick that way) and still can't believe how amazing it looks. Brilliant. Just bloody brilliant. The stunt work is pretty damn spectacular as well. When there's not a long dialogue scene happening, then there's a pretty long and badass car chase, which is why we're really along for the ride. Casting professional stunt woman Zoe Bell as an actual character in the film was another brilliant casting choice and you know, it just wouldn't have worked if it was really anybody else hanging off the hood of that car. That chick is fearless!

Funny how much my opinion has changed after that first initial viewing. I never made it to the theater to see this double bill when originally released with Planet Terror. I can imagine that I probably would not have enjoyed it as much as I was hoping for. For one, they would have had to cut at least 30 to 45 minutes of inane dialogue (which, by the way, would not have hurt the film in the least) as well as cut Planet Terror to make it like no more than 2 total hours. These days, you just don't want to sit in the theater for longer than 2 hours if it's not something like Lord of the Rings. I think a 1 hour Death Proof and a 1 hour Planet Terror with the badass trailers cut between the two would have been a much more successful venture. I think the idea and concept was brilliant and solid, but asking two of the United States most inventive and game changing filmmakers of there day to "limit" themselves by essentially making short films for an idea this awesome was just too difficult.
Posted by robotGEEK at 6:42 PM