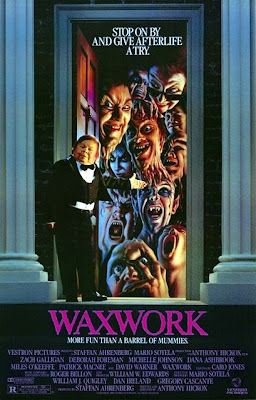 1988 was such a great year for a filmgeek. I mean, just check out the lineup of films that hit both the theaters and the home video market. Along with Waxwork we also had films like Above the Law, They Live, Hellbound: Hellraiser 2, Bloodsport, Action Jackson, Elvira: Mistress of the Dark, Prison, Red Scorpion, Fright Night Part 2, Dead Heat, Friday the 13th Part 7, Red Heat, The Blob, Die Hard, Pumpkinhead, A Nightmare on Elm Street 4: The Dream Master, Maniac Cop and to just randomly throw in a truly horrible piece of crap into the mix, R.O.T.O.R.
Is that not a truly great year of badass cinema?

I remember watching this one often, along with it's sequel and it's probably been a good 20 years since I've revisited this, so what the hell. Let's give it a go.

One night a group of friends are walking through a neighborhood when they notice a waxwork museum which seemed to appear out of nowhere right smack in the middle of a quiet suburban street. They are invited to attend a special midnight viewing by the mysterious waxwork man who insists that no more than 6 arrive for the special secret viewing. Once the friends arrive at midnight they soon discover that if you cross the barrier rope, they are sucked into the world of the exhibit themselves and ultimately become a permanent wax figure forever.

This one was just OK. I see the genuine talent writer/director Anthony Hickox possesses in some scenes and certain sequences, but maybe because of budget restraints or inexperience, it's never fully realized properly. All the actors are fine, and some of the sequences hinge on "badass", but there's some really bad and sloppy editing work that almost destroy a decent sequence. And in the end, that's really what this film is ultimately going to be about and what you will end up talking about, certain sequences. You see, once these individuals get sucked into a time portal and are transported into the world on display in the individual exhibits, then we're treated to 10 to 15 minute long sequences in these worlds. Some of them work, and some of them don't. The standout ones for me would be the werewolf sequence, the zombie sequence and the vampire sequence. The werewolf sequence probably stands out the most simply because the design of the werewolf itself was so freaking badass. The thing is huge, and the fact that it's played by none other than John Rhys-Davies only makes it cooler. The animatronics on the head don't work as smoothly as you would hope, but it still looks cool. He also splits a victim in two right down the middle pulling him apart with his bear hands. Awesome. The zombie sequence works because it's in black and white and does a great job at playing homage to George Romero's Night of the Living Dead, except it was way too brief running at a total of 3-5 minutes.

There are some familiar faces like David Warner (Tron), Zach Galligan (Gremlins), John Rhys-Davies (Indiana Jones, Lord of the Rings) and Miles O'Keefe that lend the film some much needed cred, and Hickox's inventive camera work works surprisingly well most of the time, but you can't help but feel that it's missing something. I think a decent amount of gore would have been nice, especially in the vampire sequence. You always feel like there should have been "more" when a bloody scene comes up, or maybe there was and it was severely edited. Who knows. The end though is where the film kind of falls apart. There's a huge mob scene and it just doesn't look very good. The editing's all off and only makes it look cheap. The effects work also doesn't help. The scene when the museum is on fire as the two heroin's of the story watch from outside is pretty laughable.

Probably one of the best things Waxwork has going for it is "when" it was made. 1988 is a pretty specific year during this era and the film looks and feels totally 80's, right down to the music, clothes and even there slang. I mean, I'm talking more so than "any" of the other films I mentioned earlier that came out this same year. You could swear this thing was made in 1984 or something. That's how completely dated it looks and feels, but for this film it's a plus. It adds a nostalgic factor to it and makes it much easier to watch.

I now it sounds like I'm bitching a lot, but the films not a complete failure. It's got a fun and slightly hip vibe, and some of the ideas, camerawork and the way it was pulled off works effectively well. But it also feels completely amateurish at times and that it could have been better. But hey, you gotta start somewhere right? Hickox eventually made a name for himself with films like Warlock II, Hellraiser III, Blast and Full Eclipse and the sequel to this film to name a few. And he has improved over the years, but not always. There are still a few I'd like to forget from his filmography.
Posted by robotGEEK at 3:36 PM