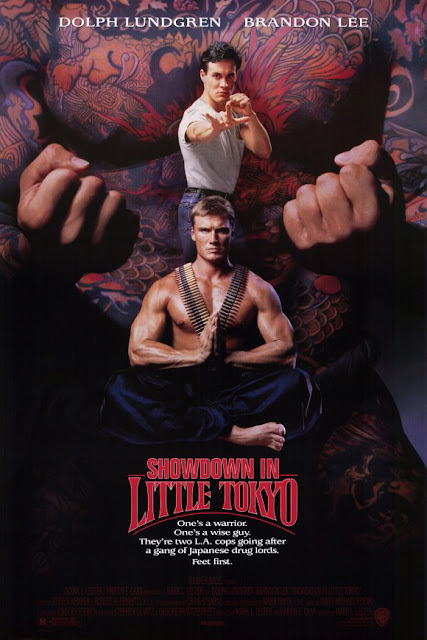 Check out the guy's over at Comeuppance Reviews who also recently reviewed this great 90's gem where we all unanimously agree, this film kicks some serious action ass.

Man, I love Dolph Lundgren's output in this point in his career. Masters of the Universe, Red Scorpion, The Punisher, Dark Angenl aka I Come In Peace, Showdown in Little Tokyo, Universal Soldier and Army of One aka Joshua Tree. Yes, I know MOTU as a film is a joke, but it did kinda put his name out there.

But this output is so badass for any action star wannabe and next to the Governator, Stallone and Willis, who else did we have? I fully expected Lundgren to take the mantle as the Planet Hollywood trio were really getting up there in age and we hadn't yet found a suitable replacement. But a funny thing happened. After a string of badass aforementioned films, he went straight to the DTV market with the exception of a few roles here and there. I don't know why and I can't explain it. I fully expected this larger than life Swede to take over but unless you were hardcore into DTV stuff, you kinda forgot about him until he slowly started to appear in better than average fare in the DTV market and then when The Expendables hit theaters, "everyone" was like, "It was so good to see Lundgren back on the big screen kicking ass.". Or was that just me?


One's a warrior. One's a wiseguy. They're two L.A. cops going after a gang of drug lords. Feet first.
Showdown in Little Tokyo is a prime example of a certain kind of film they just don't make anymore, the cop/buddy movie. Back in the 80's and early 90's this formula was rampant, but extremely rare these days. You know the formula, the mismatched pair of detectives who don't like each other at first but are forced to work together anyway and end up being friends. Here Dolph is teamed with the late great Brandon Lee. Brandon plays more of the straight edged-clean cut type to Dolph's renegade tough guy-doesn't give a shit about the rules-can't keep a partner kinda cop. And it all works so wonderfully here. Director Mark L. Lester  (Commando) keeps the pace and action going at a relentless speed that not 5 minutes go by without some kind of a shootout or fist fight, it's just great. And I'm totally serious, this film is nonstop relentless action from the opening credits to the end. Dolph is in the best shape of his life here and plays the part with such ease. Brandon Lee is also great as the new partner who is also really good a Bushido, but isn't very interested in his heritage, for which Kenner (Lundgren) constantly gives him shit for. You see, Kenner is white, but grew up in Japan, speaks the language, knows the moves and wears the clothes when the situation calls for it. Murata (Lee) only possesses his martial arts skills because his mother forced him to beginning at age 4 and couldn't really give a shit about the importance of his heritage.

There's so much to love about this film if you're an action fan. For one, you have pretty much any Asian looking character actor known to man during this time have a role as a bad guy in this, even if they weren't technically asian, but looked it. Another is the splendidly cheesy 80's score that would effortlessly move from asian themed guitar, to 80's cop/buddy action playful movie theme, to serious searing action sequence music. I think I counted about 3 different types of theme music in here all played regularly when the mood changed. The action scenes and fight sequences are handled well by director Mark L. Lester, utilizing both Lundgren's and Lee's martial arts abilities frequently and to great effect. Cary-Hiroyuki Tagawa as the main villain Yoshida is always a blast to watch in anything he's in. He's so good at being a bad guy that whenever you see him in any role other than the villain (which is extremely rare) you're always shocked. Tia Carrere, who hadn't yet made a name for herself with Wayne's World-that would be the following year, does a solid job as the pretty witness who Kenner and Murata (Lee) must protect so she can testify against Yoshida (Tagawa) and who "undoubtedly" falls in love with Kenner in the process and uses a body double frequently for her nude scenes. No, that's not really Tia Carrere getting butt naked into the hot tub.

If I had any gripes about this film at all, it would be only two things. One is that I wish the final sword fight "showdown" between Kenner (Lundgren) and Yoshida (Tagawa) was longer. Yea it was pretty cool anyway, but it felt kinda brief. And the second issue would be that when you watch Brandon Lee, you can't help but get a little sad and miss the guy. He's really great in this and such a natural. It feels like such a travesty that we only got 3 great movies out of him before he left us and it's truly a tragedy for modern cinema. Who knows how high this guy could have gone.

I'm sure you noticed that no plot summary was offered this time. Honestly, there's no need and who cares. You have Dolph Lundgren in his prime. You have the awesome Brandon Lee. They play two mismatched cops teamed together to solve a case who don't like each other at first but learn to be buddies. You have nonstop wall to wall action from Commando director Mark L. Lester. And you have Tia Carrere looking hotter with the help of a naked body double. Mix this all together and you have one of the best straight to video action/martial arts films to come out of the early 90's before that genre pretty much dissolved altogether.  Showdown in Little Tokyo is pure cop/buddy-action/martial arts epicness.
Posted by robotGEEK at 9:16 PM