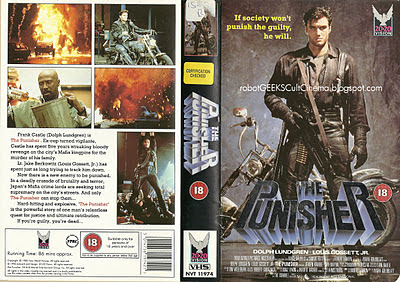 I just wanted to give some quick thoughts on the workprint edition of this awesome piece of badass cinema from the best era in Dolph Lundgren's career, the late 80's to early 90's.

I was only recently made aware that there was even a workprint edition of this film in existence, and it was completely by accident. Only thing is, apparently it's really only readily available in Germany, unless you feel confident enough to try and download it somewhere on the internet without getting a nasty virus. In my case, I need to thank my good buddy and fellow filmgeek Ingo (who lives in Germany) over at Hellford 667 Movie Reviews for hooking me up with a copy. You're the best!

You know, I was always suspicious of there being an alternate cut, or in the least, some deleted scenes floating around somewhere. They were never presented on the standard and "only" U.S. DVD release, but even as far back as the VHS release, there's an image of Dolph as Frank Castle in his street clothes standing on a dark street holding a gun with his partner Jake standing next to him and Sam (who would show up in the film as a detective who teams up with Jake because she also believes Frank Castle is in fact The Punisher), dressed as an undercover prostitute on the back cover. However that scene is not in the final cut of the film, even though it's specifically mentioned when Sam introduces herself to Jake in the beginning of the film as he is investigating the house that The Punisher just blew up. 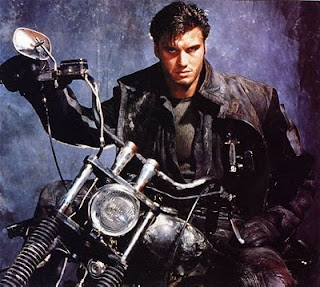 So anyway, the workprint edition. It's pretty damn great if you ask me. Right in the beginning, before we're shown any familiar footage from the regular U.S. edition, we're given a complete 16 minute prologue of Frank Castle before he became The Punisher. Right of the bat we're shown Frank and his partner Jake during a stakeout waiting for a deal to go down in a warehouse with Sam undercover as a prostitute inside. We see them talk, joke and banter back and forth giving us a much clearer definition of there relationship before Frank went AWOL. And you see they were in fact best friends, one would say even more like brothers. You even see Frank show concern and sympathy for his recovering alcoholic friend. Then the deal goes down and Frank and Jake, along with Sam bust the deal in a pretty big shootout followed by Frank swinging into a ring (a la Showdown in Little Tokyo) and kicks some ass.
Afterwards we see Frank go home to his waiting wife and family as it moves onto the next morning where Frank is at home getting ready for work when Jake shows up to pick up his partner and they head off to the airport to put the heat on Franco. Franco, incensed that Castle is trying to shake him orders a hit. As Frank and Jake are heading back to Frank's house, we see his family getting into the family car where they are supposed to meet up with Frank later at a party where it ultimately blows up just as Frank and Jake are pulling up. Frank runs to the car and bangs on the window (this scene is actually shown in a flashback sequence in the U.S. release) where it explodes in a huge ball of fire with Jake standing nearby helpless.
Cut to the scene where Moretti (One of Franco's men) is leaving the courthouse after being released as he's interviewed by a female reporter before getting into a waiting limousine with The Punisher watching from his motorcycle nearby. And that's where the film resumes to the regular U.S. edition we've seen since it's initial 1999 DVD release.

I loved seeing this new footage. For me, it shows The Punisher was actually a human being capable of "feeling" actual emotions. Without sounding too cliche, it makes him look more human. Whether or not that's something you want to actually see is a different story. I myself enjoyed it quite a bit. I mean, we kinda knew he had "some" kind of soul since the only reason he even got involved in the whole mess to begin with was because he was going to rescue the children of the all the mob bosses who had been kidnapped by the Yakuza. So right there you know he's got feelings, otherwise why would he risk his life for a bunch of kids?
And it shows that he indeed had a pretty strong relationship with his partner Jake. More than anything though, it was cool and kinda strange seeing Frank wearing a bright blue suit as he goes to work as a detective. He's shaven, clean cut and more than anything, just plain clean and healthy looking. Although it's in these deleted  sequences that we see how strangely thin Dolph Lundgren was when he made this. I don't think I've ever seen him looking so lanky before, especially considering how huge he got for Showdown in Little Tokyo just 2 years later.

I will say this though, this entire 16 minute intro into The Punisher's life as Frank Castle does shift the pace of the film. Whereas we're used to a balls to the wall action film right from the get-go in the original version, this workprint edition slows down the pace significantly and in hindsight, I can understand why they cut the scenes. They just didn't really offer anything to the story that couldn't be told through flashbacks or through conversation. It was just cool getting to see some never before seen footage to one of Dolph Lundgren's greatest films and shows what kind of film The Punisher could have been, whether for the better is completely up for debate.
Posted by robotGEEK at 8:23 PM