Wow.
I mean just.......wow.
This is a film I've only recently become aware of and apparently am one of the last few filmgeeks who know of it's existence or one of the last few who hasn't seen it until now. The first time I actually came upon it was by accident. I was casually browsing eBay a few months back when I stumbled upon an original Japanese VHS and more than anything, the title caught my eye. I mean, Robowar just sounds awesome, no matter how good or bad the movie might be. The listing stated that it was extremely rare and at that particular time, had no bids. I did a quick IMDB search and found that it had a disastrous 3.1 rating. None of the reviews were very kind either. So I thought, what the hell? Make a bid and maybe I'll get lucky. Well, after 2 days the bids started rolling in like crazy and when the auction ended it sold for a monstrous $91 U.S. dollars. I couldn't believe it. Did I miss something? How can a film that has such a low rating and horrible reviews go from a starting bid of $5 and jump to $100!? You know why? Because it's awesome, that's why. Also because someone can pay $100 for the Japanese VHS and just burn it to a DVD and sell it online and make a shitload of money because people will pay since there is really no other option. On the plus side, the Japanese VHS is in true Widescreen, which is just awesome, but with non-removable subtitles.
On a side note, I should mention that someone went into the IMDB page and removed the Japanese VHS cover image and switched it with some old movie called "Roboman" starring Elliot Gould. And the rating also jumped up to 4.0 since the last time I checked, so maybe the words getting out and more people are discovering this Italian-low-budget-shot in the Philippines-part Predator-part Robocop-jungle war film.

Before I go any further I need to thank my good buddy Ingo in Germany over at Hellford667 Movie Reviews for hooking me up with a copy of this. This thing is practically impossible to get "authentically" and it's a real shame because like Phantom Soldiers, more people need to be aware of this film and it should be more readily available.

A secret group of  mercenaries is hired by the U.S. government to head into the jungle and infiltrate a group of guerrillas, or so it seems. Along for the ride is an Army scientist who knows more than what he's letting on and who doesn't mix well with this hardened group of soldiers of fortune.
What they soon discover is that what they think is a group of guerillas is actually a rogue robotic killing machine designed and created by the U.S. government on the fritz and running amok in the jungle systematically killing everything in it's path. Now it's up to Maj. Murphy Black (Reb Brown) and his group of mercenaries to stop this unstoppable killing machine before it kills them off one by one.


My man Matt over at Direct to Video Connoiseur said it perfectly in his review when he stated that Robowar is 85% Predator, 12% Robocop and 3% jungle war film. I mean, it honestly is. I couldn't believe how much of a blatant Predator ripoff this thing was. Let me put it this way, if John McTiernan and the Davis brothers and company had never made Predator in 1987, then this movie would not exist because it's pretty much a carbon copy of that film. I'm talking about sequences, characters, scenes and even lines of fucking dialogue for Christs sake! It was hilarious! I even considered taking notes on all the similarities but didn't want to distract myself from the awesome time I was having with this, because it really was a lot of fun to watch. If you're a dude and you grew up in the 80's, then you pretty much know Predator by heart and spotting these copied scenes, lines of dialogue, characterizations and full on sequences will be no problem for you and you just can't help but laugh out loud at the audacity of it all. 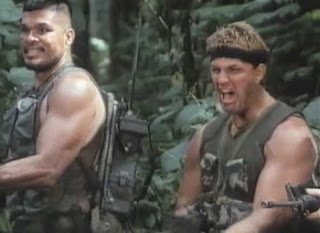 Robowar is an Italian production, shot in the Philippines, and starring a pretty diverse group of International actors, most notably the laughably over the top Reb Brown, who also worked with director Bruno Mattei back in '87 in Strike Commando. Here he plays the groups leader, Major Murphy Black. And the name of this secret unit that he leads is called B.A.M., brilliantly short for (Bad Ass Motherfuckers). I shit you not! How awesome is that? !
Reb Brown is really something else in this. The guy screams..............a lot.
He screams and screams and screams for basically no reason at all other than to just be able to scream. He screams when he's giving orders. He screams when he's running. He screams when he's shooting his gun. He screams when he's looking for somebody. He screams when he's talking. It's hilarious. It's almost like he's playing a characiture (did I spell that right?) of Arnold Schwarzenegger's Dutch from Predator and pretty much any macho leader of a group of soldiers for hire from any jungle or war film. But at the same time he plays it so straight and so serious, so I'm inclined to think that's not the case here. Either way he is perfect in this and I can definitely see how he's made a name for himself in the low-budget exploitation genre.

Robowar works great if you lower your expectations. I wouldn't say it's as awesome as Phantom Soldiers, but it's pretty close. It has a few issues like lots and lots of boring scenes of the men just walking. They try to make it more interesting by throwing in a bad 80's rock song to liven things up, but it doesn't work and more than anything just seems oddly out of place in this type of film. But director Bruno Mattei handles the action pretty well and besides the endless scenes of men walking through the jungle, keeps the pace moving nicely with lots of explosions, shootouts, Predator play by play re-enactments and Reb Brown screaming. I'm slightly ashamed to admit that I've never seen any other of Mattei's films from his vast and peculiar filmography, but I hope to change that very soon starting with Strike Commando. There's a scene in here that I just can't shake out of my head. B.A.M. has just descended into the jungle when they hear a woman's screams. They make there way to the road and see that her, along with two men, are being chased by some locals in a jeep. B.A.M. decides to intervene and slowly makes there way to the side of the road. The locals kill the two men but not the woman. So there's somewhere like 7 or 8 guys on the side of the road taunting and man handling this woman when the camera pans to the right and shows B.A.M. literally just standing right there like a few feet away out in the open with there guns drawn and none of these bad guys notices them?! I was like WTF?! And B.A.M. blows them away in glorious fashion of course. That shows you what kind of movie you're in for.

I've always been a filmgeek. But it wasn't until I started this review site and met some pretty awesome people along the way over at review sites like Hellford 667 Movie Reviews, Comeuppance Reviews, Direct to Video Connoisseur, A Hero Never Dies, and The Video Vacuum to name a few that I've become aware of some pretty badass films I might not have otherwise come across in my lifetime. Because let's face it, unless your a hardcore fan of a specific genre, you just can't see "everything". There's just too many films and not enough time, especially with a job, family and a life. So thank you to my new friends who have opened my eyes to these rad films. I just wish I had the time to watch them all.

Posted by robotGEEK at 9:08 PM